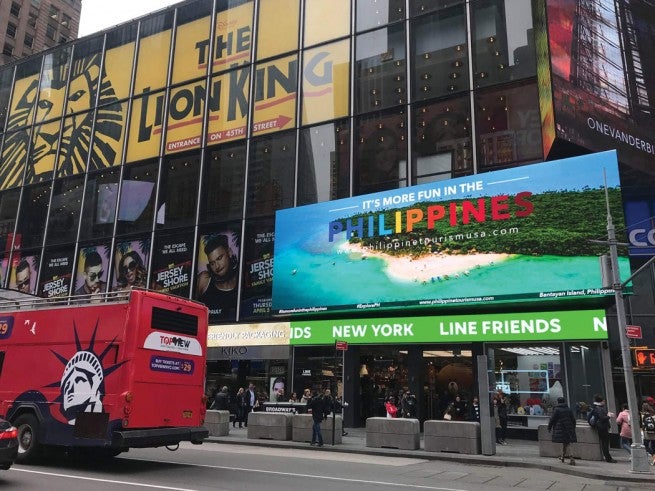 NEW YORK – An advertising campaign promoting the Philippines as a major tourism destination is in full swing with posters of picturesque locations plastered on various New York City subway cars and ads running on a large electronic billboard in Times Square.

The subway campaign began on the first week of March and will reportedly run for about 16 weeks, showing digital images of famous and upcoming travel sites such as Bantayan Island in Cebu, Samal Island in Davao, El Nido in Palawan, and Chocolate Hills in Bohol.

This week, various digital display panels on bus stops across the city will also feature photos and videos of these destinations.

“Times Square is the crossroads for everyone coming to New York, coming from all over the world, so tourists from all over, along with locals, will get to see this,” said Consul General Tess Dizon-De Vega.

Tourism Attaché Susan del Mundo made the announcement about the campaign weeks ago during the launching of the 2018 Ambassadors Tour. Local residents and visitors have been posting photos of said posters on social media platforms like Facebook and Instagram.

The posters carry the tagline #ItsMoreFunInThePhilippines and the PH Department of Tourism’s USA website www.philippinetourismusa.com as well as the hashtag #ExplorePH.