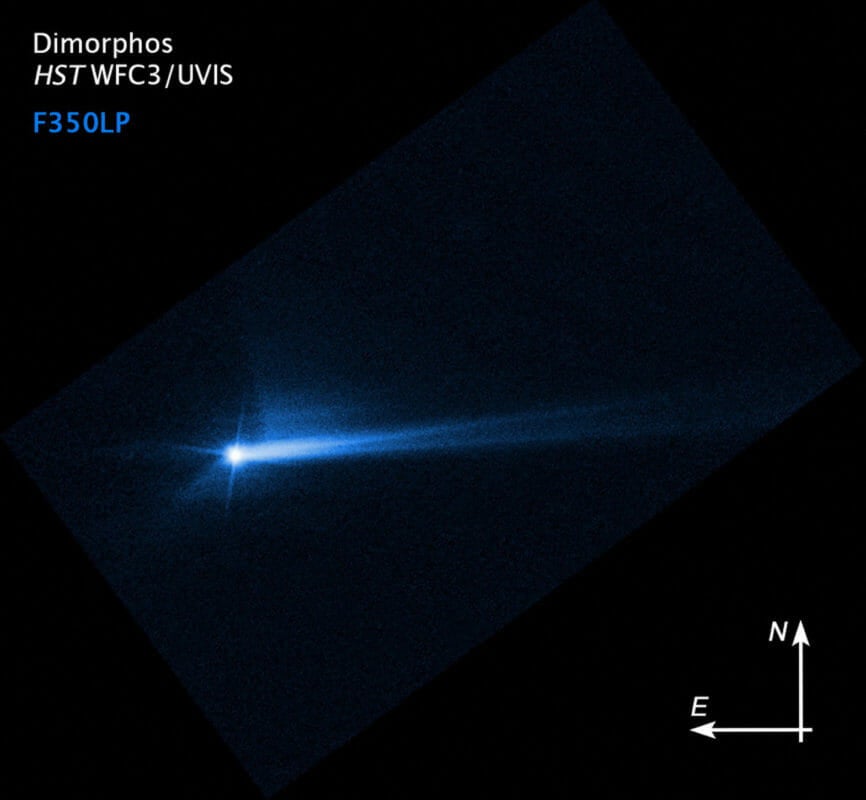 View of debris blasted from the surface of Dimorphos 285 hours after the asteroid was intentionally impacted by NASA’s DART spacecraft on September 26, in this imagery from NASA’s Hubble Space Telescope taken October 8, 2022. NASA/ESA/STScI/Hubble /Handout via REUTERS

The spacecraft NASA deliberately crashed into an asteroid last month succeeded in nudging the rocky moonlet from its natural path into a faster orbit, marking the first time humanity has altered the motion of a celestial body, the U.S. space agency announced on Tuesday.

The $330 million proof-of-concept mission, which was seven years in development, also represented the world’s first test of a planetary defense system designed to prevent a potential doomsday meteorite collision with Earth.

Findings of telescope observations unveiled at a NASA news briefing in Washington confirmed the suicide test flight of the DART spacecraft on Sept. 26 achieved its primary objective: changing the direction of an asteroid through sheer kinetic force.

Astronomical measurements over the past two weeks showed the target asteroid was bumped slightly closer to the larger parent asteroid it orbits and that its orbital period was shortened by 32 minutes, NASA scientists said.

Last month’s impact, 6.8 million miles (10.9 million km) from Earth, was monitored in real time from the mission operations center at the Johns Hopkins University Applied Physics Laboratory (APL) in Laurel, Maryland, where the spacecraft was designed and built for NASA.

DART’s celestial target was an egg-shaped asteroid named Dimorphos, roughly the size of a football stadium, that was orbiting a parent asteroid about five times bigger called Didymos once every 11 hours, 55 minutes.

The test flight concluded with the DART impactor vehicle, no bigger than a refrigerator, slamming directly into Dimorphos at about 14,000 miles per hour (22,531 kph).

Comparison of pre- and post-impact measurements of the Dimorphos-Didymos pair as one eclipses the other shows the orbital period was shortened to 11 hours, 23 minutes, with the smaller object bumped tens of meters closer to its parent.

Tom Statler, DART program scientist for NASA, said the collision also left Dimorphos “wobbling a bit,” but additional observations would be necessary to confirm that.

The outcome “demonstrated we are capable of deflecting a potentially hazardous asteroid of this size,” if it were discovered well enough in advance, said Lori Glaze, director of NASA’s planetary science division. “The key is early detection.”

Neither of the two asteroids involved, nor DART itself, short for Double Asteroid Redirection Test, posed any actual threat to Earth, NASA scientists said.

But Nancy Chabot, DART’s coordination lead at APL, said Dimorphos “is a size of asteroid that is a priority for planetary defense.”

A Dimorphos-sized asteroid, while not capable of posing a planet-wide threat, could level a major city with a direct hit.

Scientists had predicted the DART impact would shorten Dimorphos’ orbital path by at least 10 minutes but would have considered a change as small as 73 seconds a success. So the actual change of more than a half hour, with a margin of uncertainty plus or minus two minutes, exceeded expectations.

The relatively loose composition of rubble that Dimorphos appears to consist of may be a factor in how much the asteroid was budged by DART’s blow.

The impact blasted tons of rocky material from the asteroid’s surface into space, visible in telescope images as a large debris plume, producing a recoil effect that added to the force exerted on Dimorphos from the collision itself, NASA said.

Launched by a SpaceX rocket in November 2021, DART made most of its voyage under the guidance of flight directors on the ground, with control handed over to the craft’s autonomous on-board navigation system in the final hours of the journey.

Dimorphos and Didymos are both tiny compared with the cataclysmic Chicxulub asteroid that struck Earth some 66 million years ago, wiping out about three-quarters of the world’s plant and animal species including the dinosaurs.

Smaller asteroids are far more common and present a greater theoretical concern in the near term, making the Didymos pair suitable test subjects for their size, according to NASA scientists and planetary defense experts.

Also, the two asteroids’ relative proximity to Earth and dual configuration made them ideal for the DART mission.