The story of the Galedo family is one example of the hardships and perseverance of first-generation Filipino Americans in Stockton, California. HANDOUT

“The Galedo Family Story – 100+ Years in America” will be shown in online event o Zoom to celebrate Filipino American History Month, at 6. p.m. PST, on Oct. 12.

The story of the Galedo family is one example of the hardships and perseverance of first-generation Filipino Americans in Stockton, California.

Upon leaving the Philippines as a young man in the 1920’s, Inocencio Galedo worked in the sugar cane fields of Hawaii, then made his way to California’s Central Valley to work as a farmworker to the end of his days. His wife Sotera and first-born child would not join him in the U.S. until the end of WWII. Three more children were born in Stockton.

They grew up in the segregated neighborhoods of South Stockton during the 1950s and were college students during the political turbulence of the Civil Rights, anti-Vietnam War, ethnic studies and Third World people’s movements of the1960’s and 70’s. 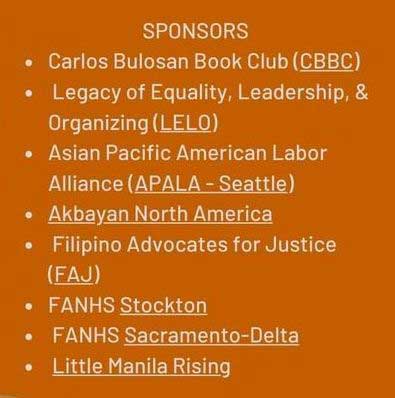 Lillian and Remy Galedo joined the Union of Democratic Filipinos (KDP) to oppose the Marcos dictatorship in the Philippines and racism here in the U.S. Their working-class roots were a foundation for the social justice work they continue to do.

Jaime Geaga, a founder and chair of the Carlos Bulosan Book Club (CBBC), encouraged the family to tell their story for inclusion in the CBBC website.

Once the initial interview was completed, Remy and her family, husband Vince Reyes, son Mateo and Vince’s brother Gary transformed the interview into a video. It captures the essence of immigrant family -building in the context of the racial discrimination experienced by the “Manong Generation” and later by subsequent migrations of Filipinos to the U.S.