Every year, around this time, viewers tune to their social media feeds to watch one competition: Fat Bear Week.

During this week-long event, animal lovers vote for their favorite brown bears from Katmai National Park & Reserve. The results of the contest are announced after the week is over, in mid-October. So, what is it that makes these hulking creatures so lovable? And why do people care about who is crowned the winner?

What is Fat Bear Week? 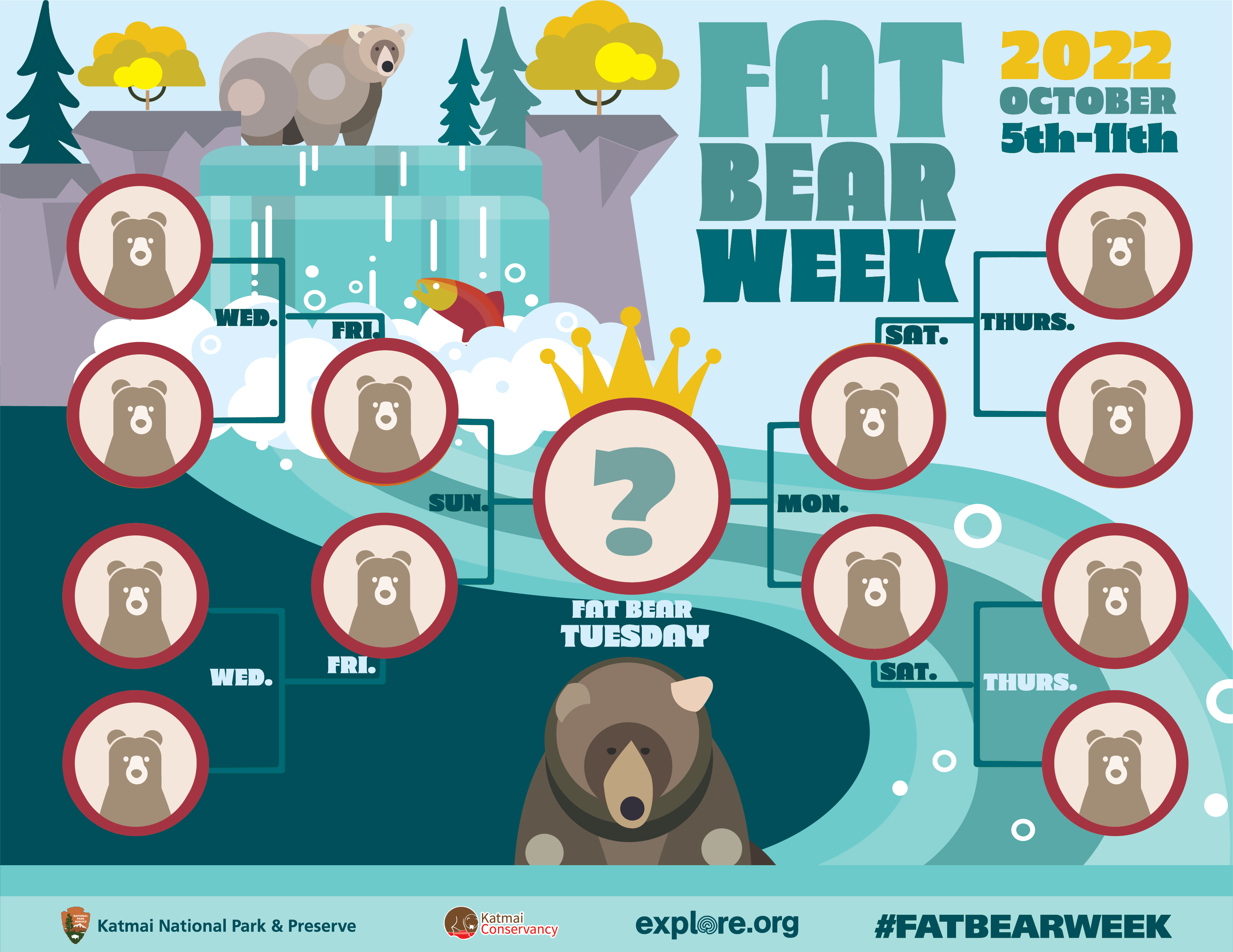 Fat Bear Week is an annual competition where the public votes for their favorite brown bear living in Katmai National Park & Preserve. In the competition, people vote for their chosen bear in a March-Madness style bracket. Fat Bear Week is held over the course of seven days, concluding on Fat Bear Tuesday. Then, a winner is crowned champion.

The origins of Fat Bear Week

The competition began in 2014 as “Fat Bear Tuesday” as an event to celebrate fat bears and Katmai’s healthy ecosystem. The iconic name comes from the importance of fat to bears’ survival.

During the winter months, bears enter a state of dormancy known as hibernation. During this time, they will not eat or drink for several months as they rely solely on their fat reserves. As a result, bears can lose up to one-third of their body weight during the winter.

However, this fat loss is necessary for survival as it provides them with the energy they need to make it through the winter. Later, in the spring, bears will emerge from their dens in early spring, when food is once again plentiful.

In order to survive the winter, bears must eat a year’s worth of food in just six months. This is why this part of the year is so important – it allows bears to build up their fat reserves so that they can make it through the winter months.

Today, Fat Bear Week has become a national sensation. Last year, over 800,000 people cast their ballots online to determine which furry friend was the fattest of them all! This season should be no different as hibernation approaches with these hefty animals gaining weight quickly before winter bites hard into April warmth.

Who are the bears competing in Fat Bear Week?

There are twelve bears in contention for the champion of Fat Bear Week 2022. 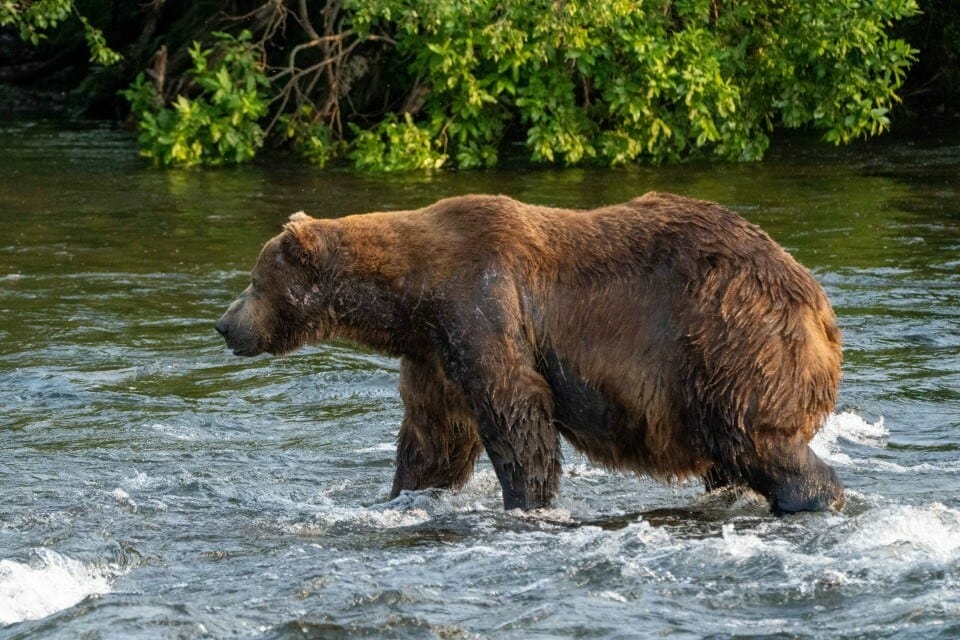 32 Chunk is a large adult male brown bear. He is known for starting the spring with the weight he gained from the previous fall, primarily in his hind quarters. 32 Chunk can also be identified by a distinctive scar across his muzzle. 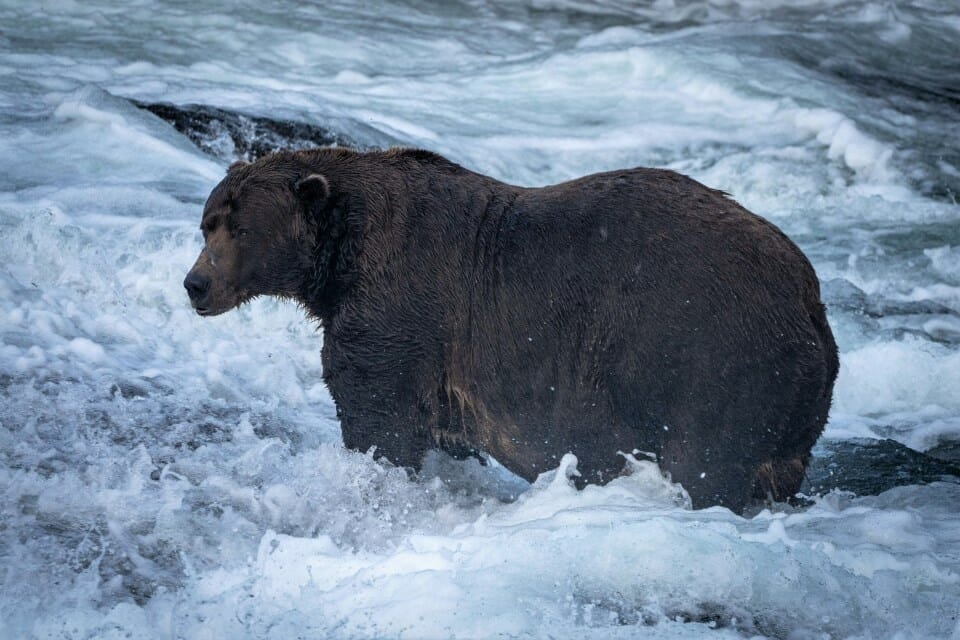 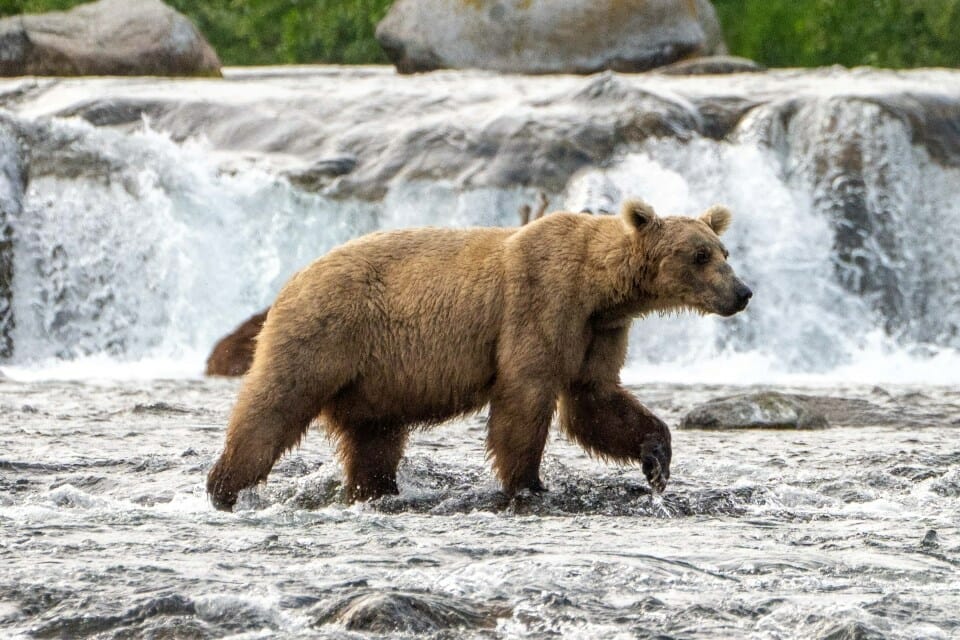 128 Grazer is a large female brown bear, and is about 17-19 years old. She is identified by her light coat in the spring, as well as the dark patches around her eyes. Although her coat is noticeably darker in the fall, she still keeps her fluffy blonde ear fur. 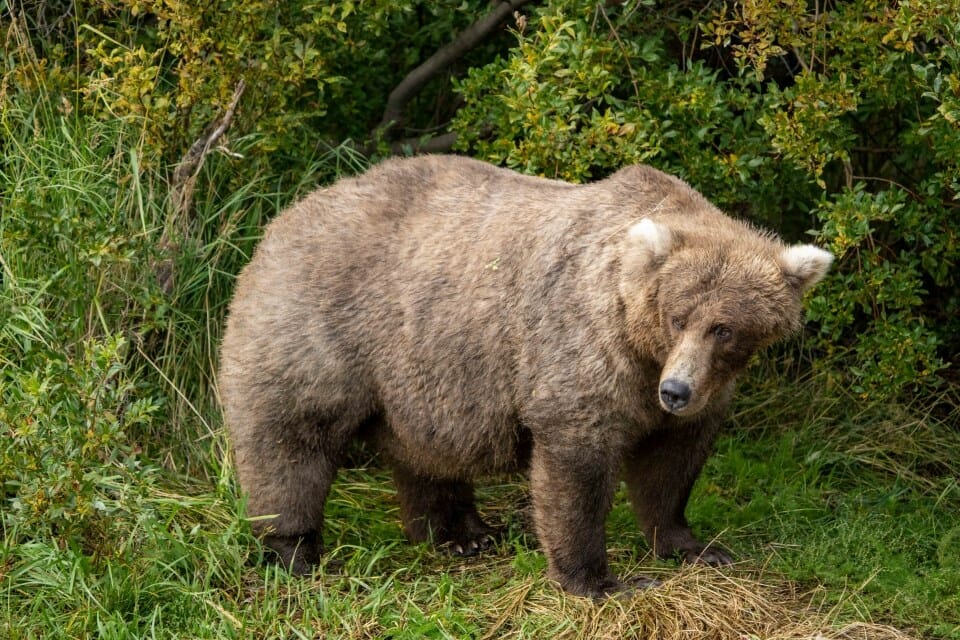 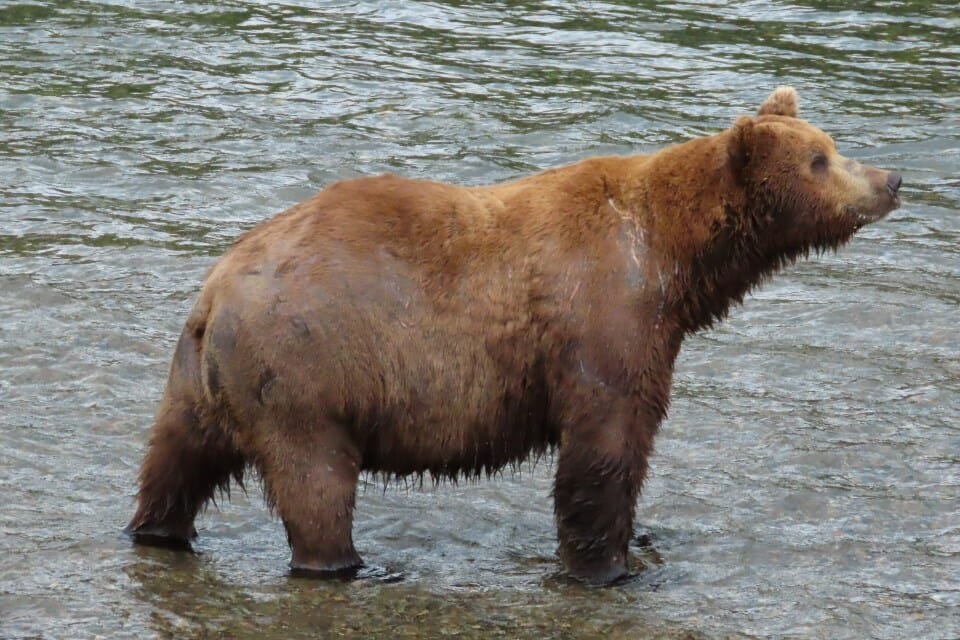 151 Walker is a large adult male brown bear. Fans identify him with his long, tapering muzzle and his widely spaced, upright ears. In the early summer, he has prominent dark eye-rings, and his fur becomes a dark brown in the late summer. However, his most recently gained and prominent feature is a large wound on his right hip. 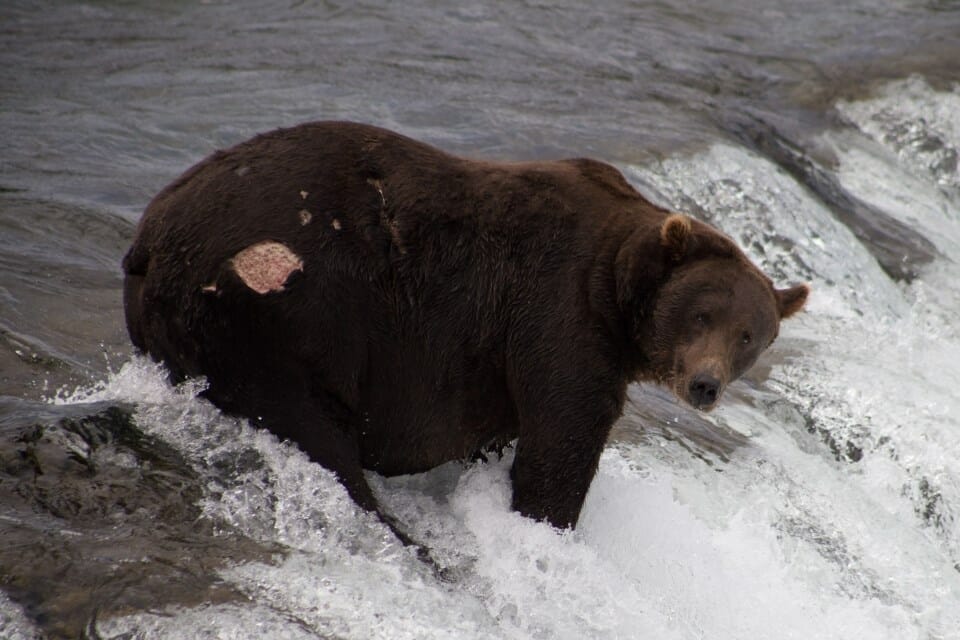 151 Walker getting ready for the winter. Photographed on August 28, 2022. Photo Credit: K. Grossman. 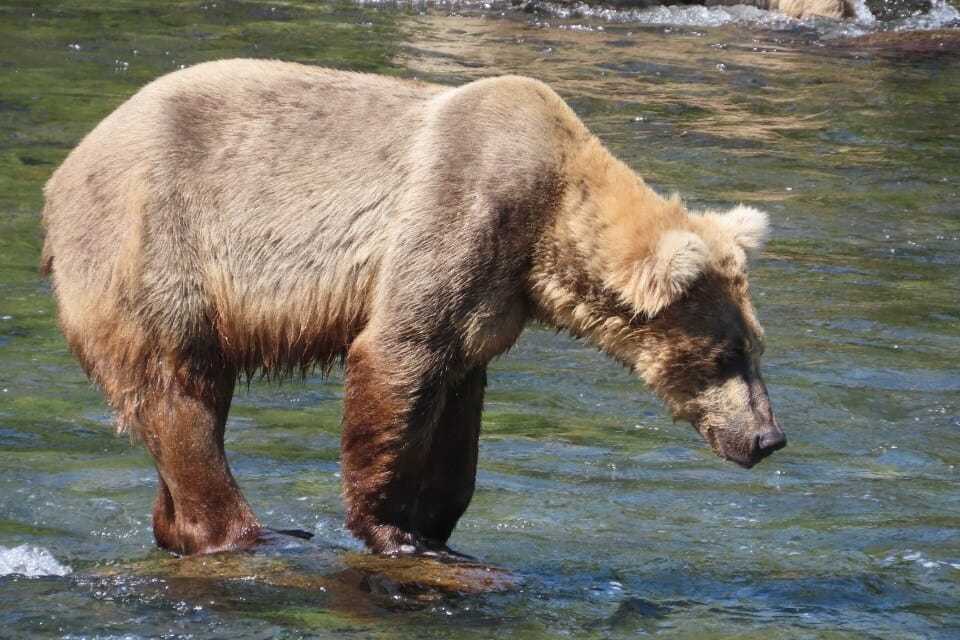 164 is a large brown bear of roughly 6 years old. In the spring, he has a light to medium brown coat that darkens significantly in the fall. He also has a dark vertical indentation on his upper muzzle. Like 128 Grazer, 164 has blond oval ears. 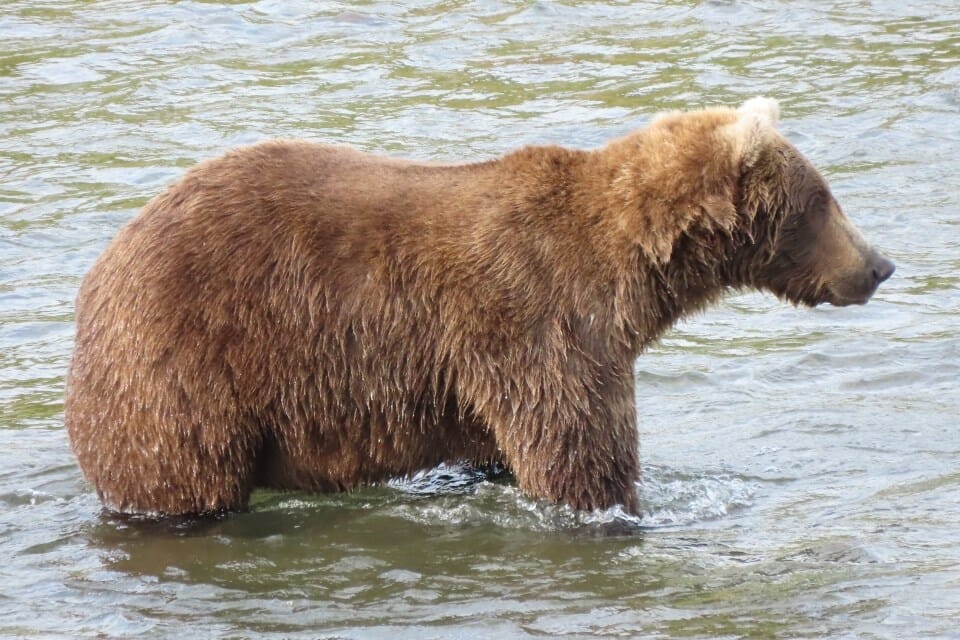 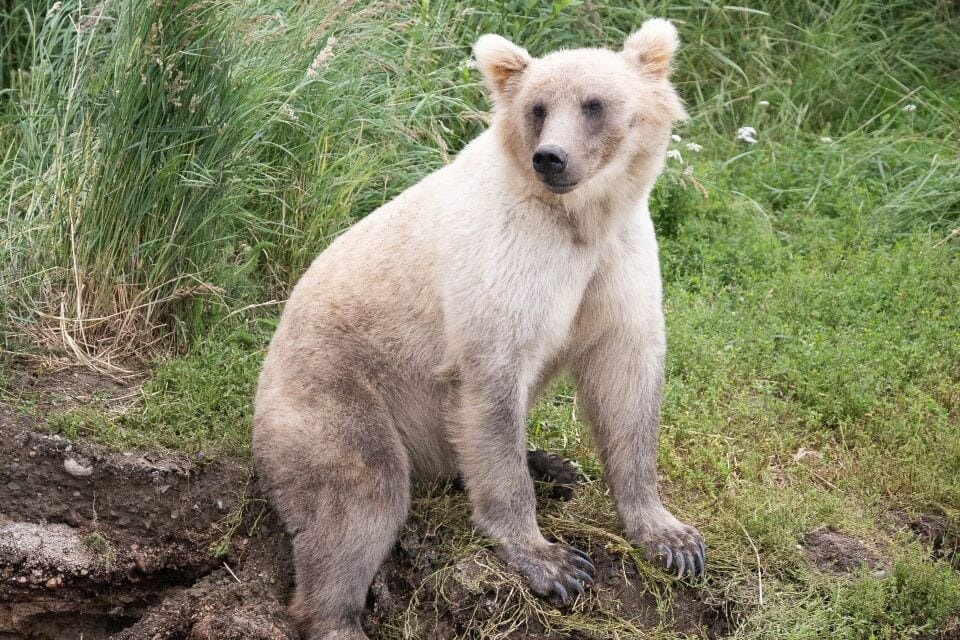 335 is a young subadult female brown bear from 435 Holly’s most recent litter. She is known for having a very light blonde coat and round, fluffy ears. This is her first winter away from her mother, and she has been seen following 435 Holly and fishing nearby. However, she has gained the critical weight needed to survive this upcoming winter without her mother, and looks to be very happy. 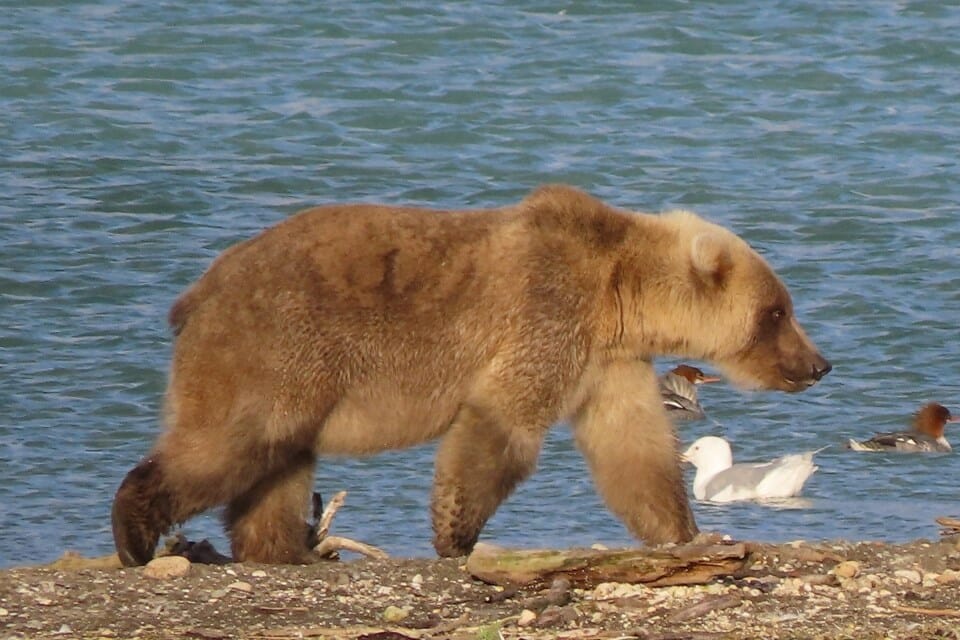 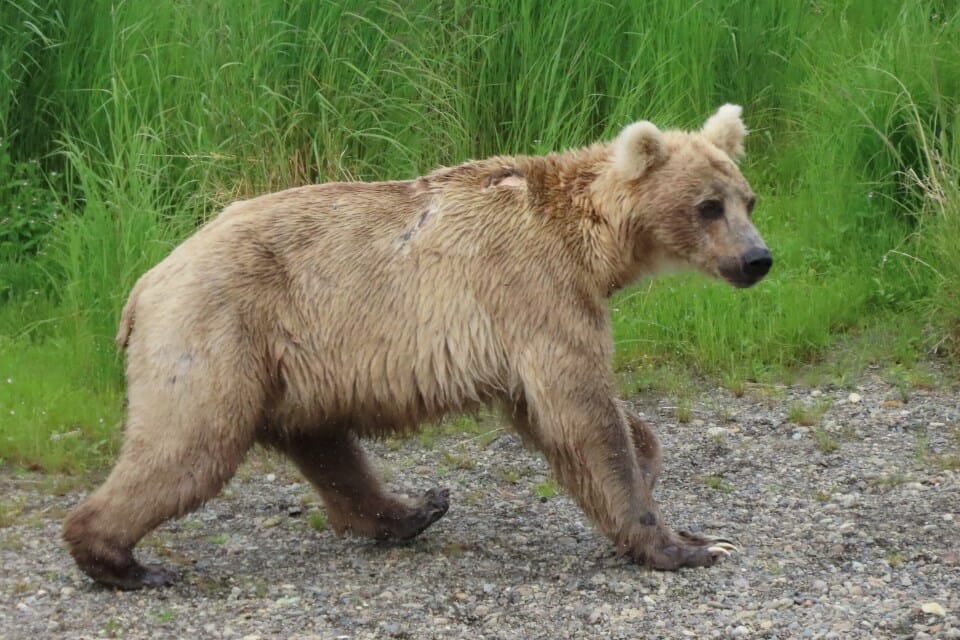 435 Holly is an adult female brown bear in her mid-to-late 20’s. Like her cub 335, she also has a light-colored coat. The National Park Service has compared her to a “toasted marshmallow.” Fans also recognize 435 Holly thanks to the dark stripe down her back, and her light-colored ears and claws. She was also the 2019 Fat Bear Champion. 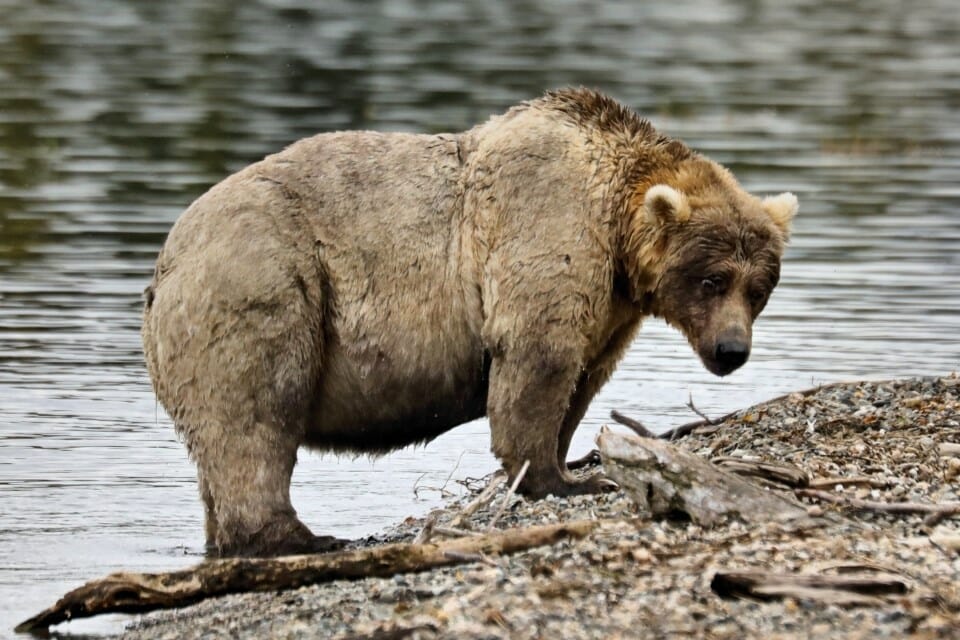 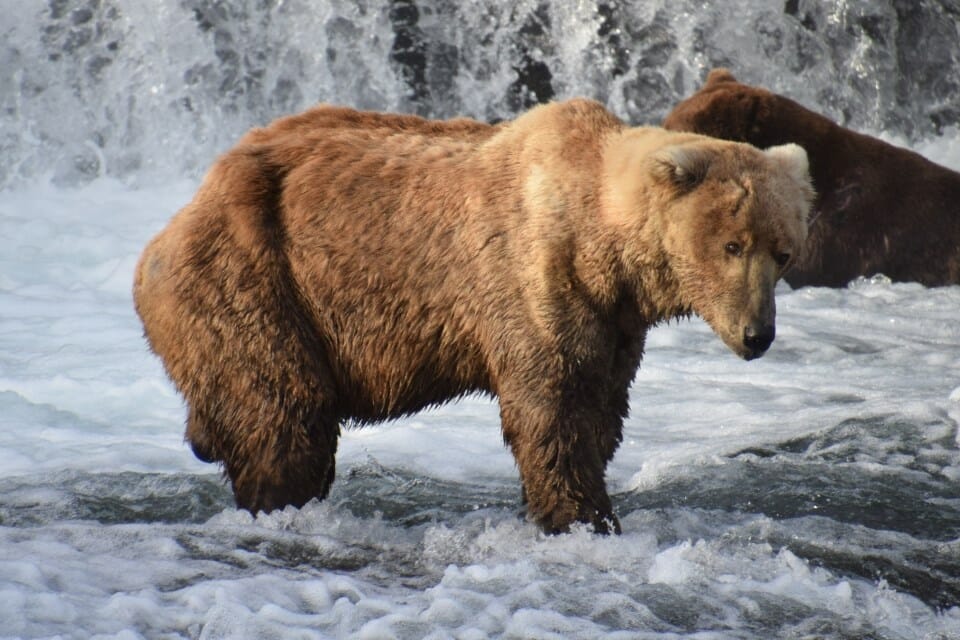 480 Otis’s summer body shows why he has been the Fat Bear Week Champion for 5 years. Photographed on July 1, 2022. Photo Credit: C. Rohdenburg.

480 Otis is one of the older male bears competing in Fat Bear Week. He is known for having a medium brown coat with a patch of blonde hair shaped like the number 7 and a floppy right ear. He is also missing two canine teeth, with the rest of his teeth worn down. However, he is still successful at fishing and putting on weight. He was also the champion of Fat Bear Week in 2021 and in 2014, 2016, and 2017. 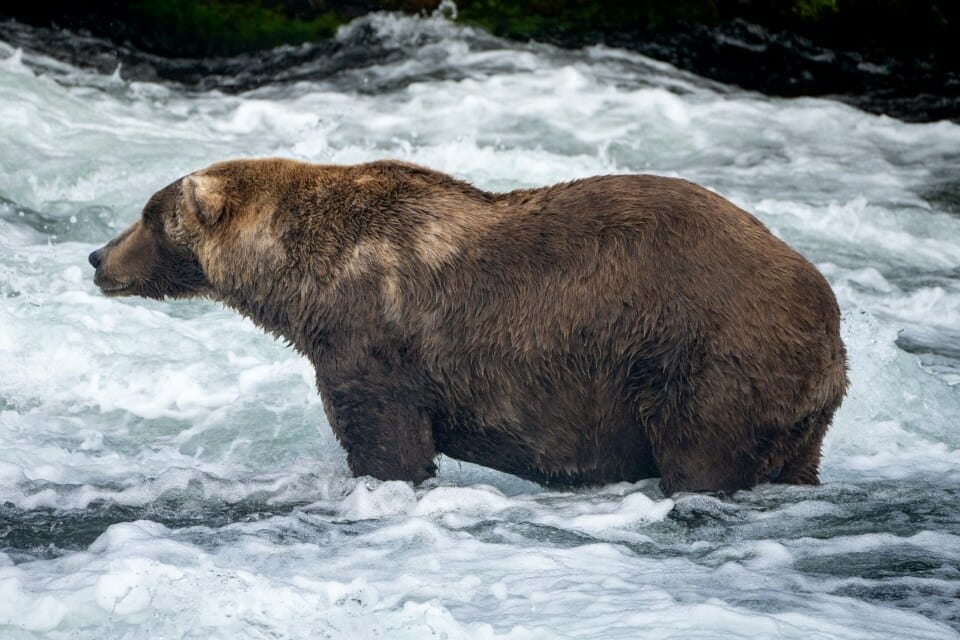 747 is the largest bear known to use the Brooks River in Katmai. He is roughly in his mid-20s, and has a stocky build, short muzzle, and a dark brown coat. 747 is also heavily scarred, and appeared with torn ears this year. He is also the favorite to win this year, as his large size and assertive disposition has led him to be the top bear of the hierarchy at Brooks Falls. 747 was also the Fat Bear Champion in 2020. 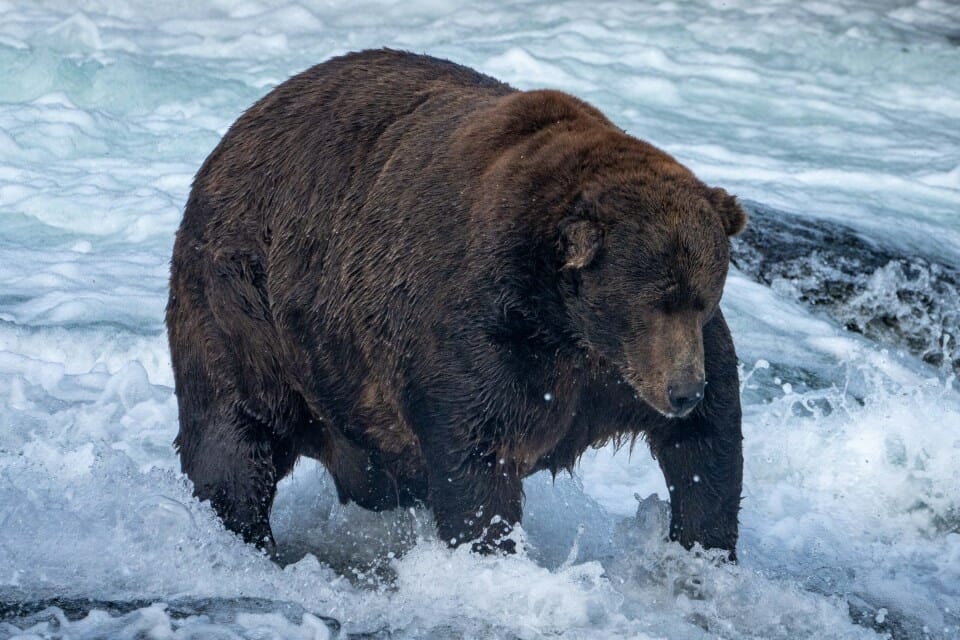 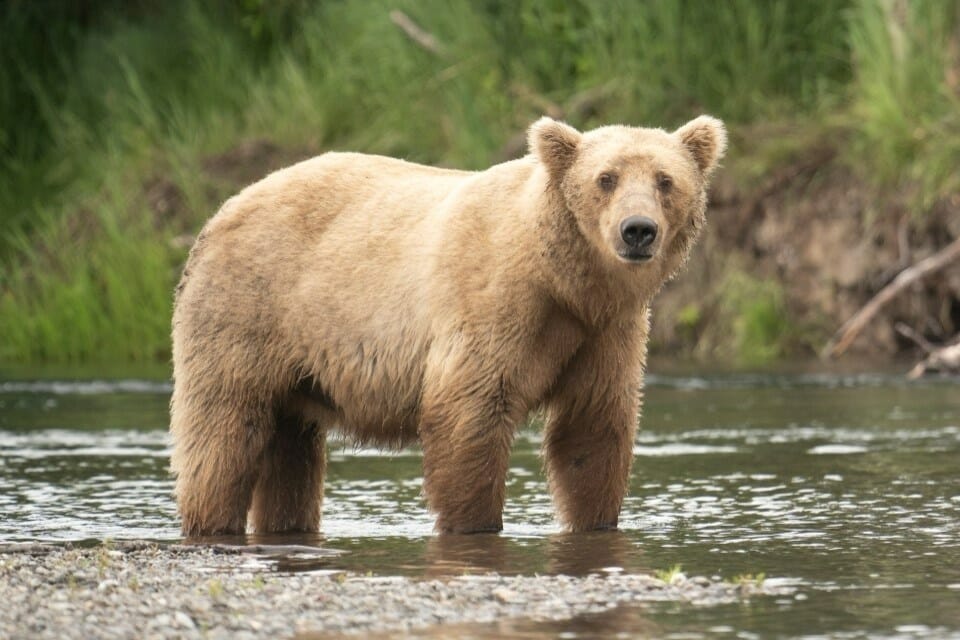 854 Divot is a female brown bear of about 20 years old. She has a straight muzzle with close-set eyes. 854 Divot is also known by a scar around her neck from a wire wolf snare that had to be removed back in 2014 by park rangers. 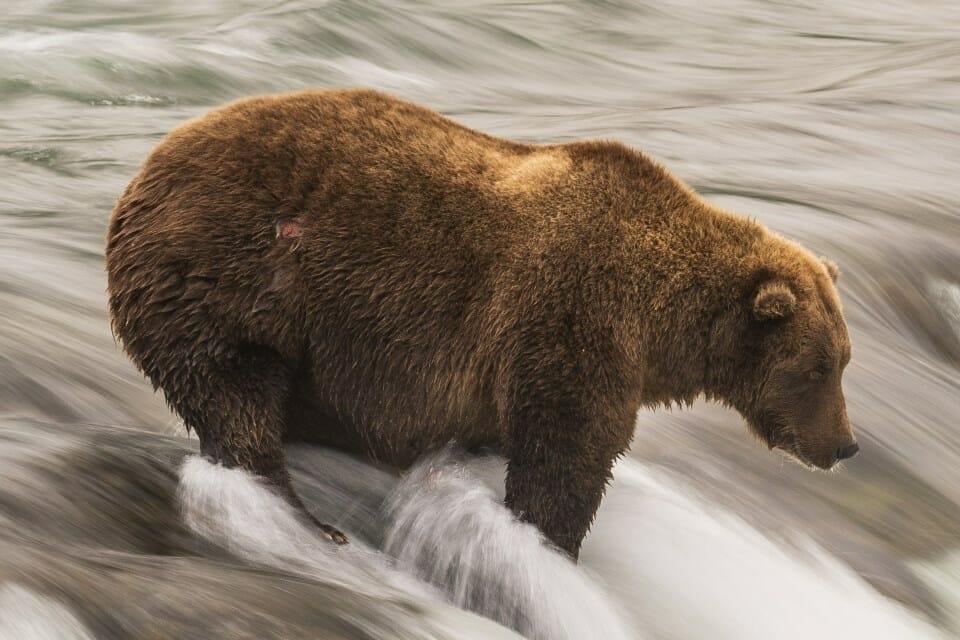 854 Divot has a much fatter body in the fall. She still retains some light brown patches of fur. Photographed on August 17, 2022. Photo Credit: K. Moore. 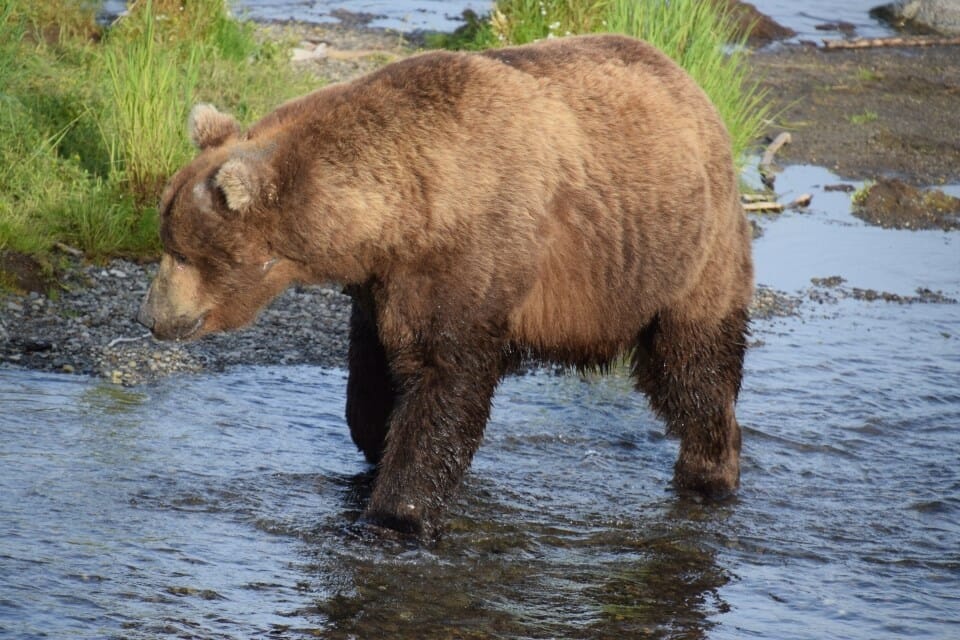 856 is another large male brown bear. At approximately 20 years old, 856 has a lighter brown coat and light ears. He retains these light-colored ears when his coat turns darker in the fall. 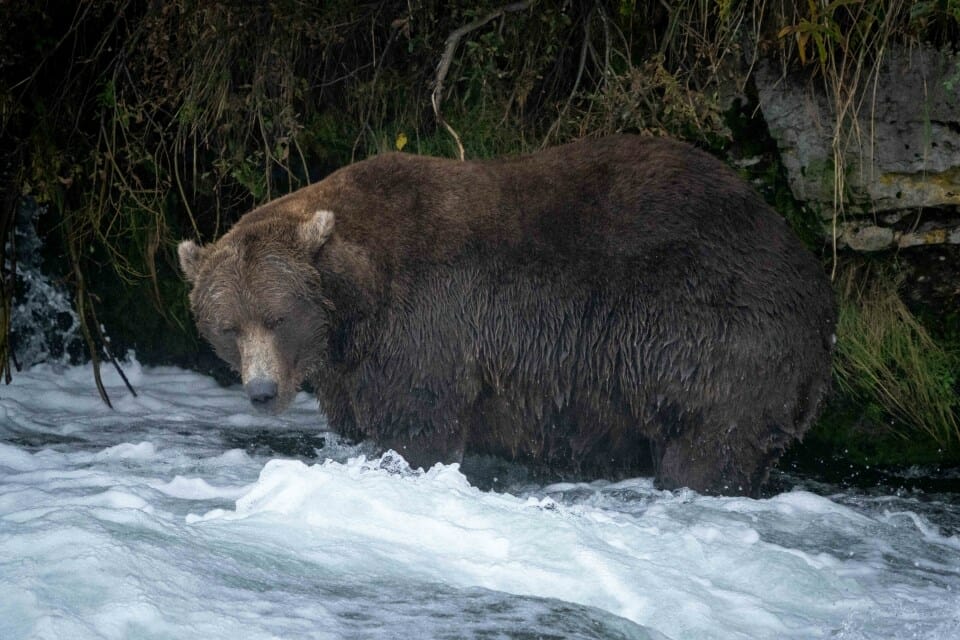 856 has gained an impressive amount of weight in the fall. Photographed September 11, 2022. Photo Credit: L. Law. 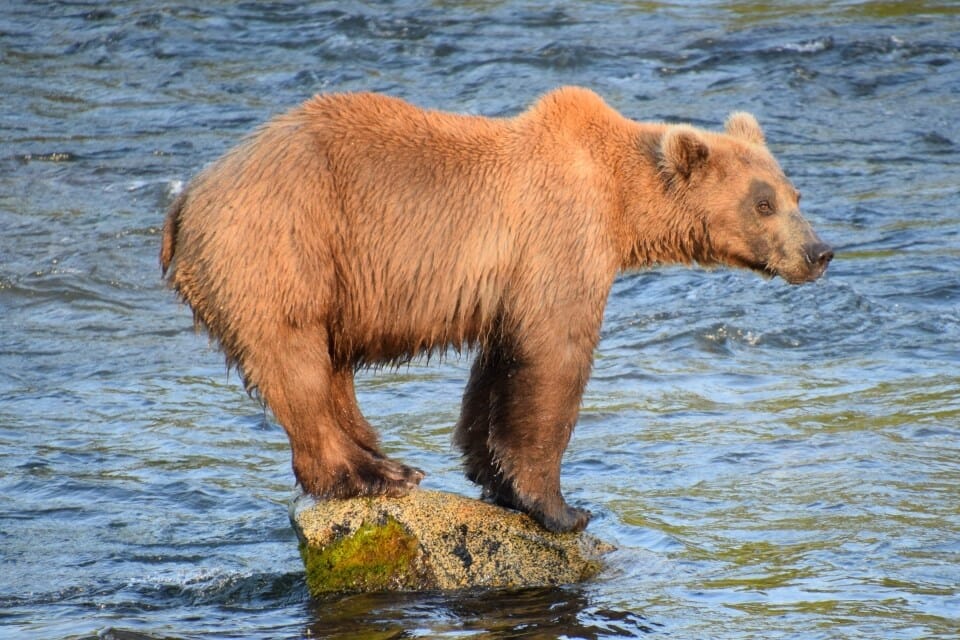 901 is a young subadult female brown bear. She has blonde rimmed, triangle-shaped ears, and her face is darker with a lighter muzzle. 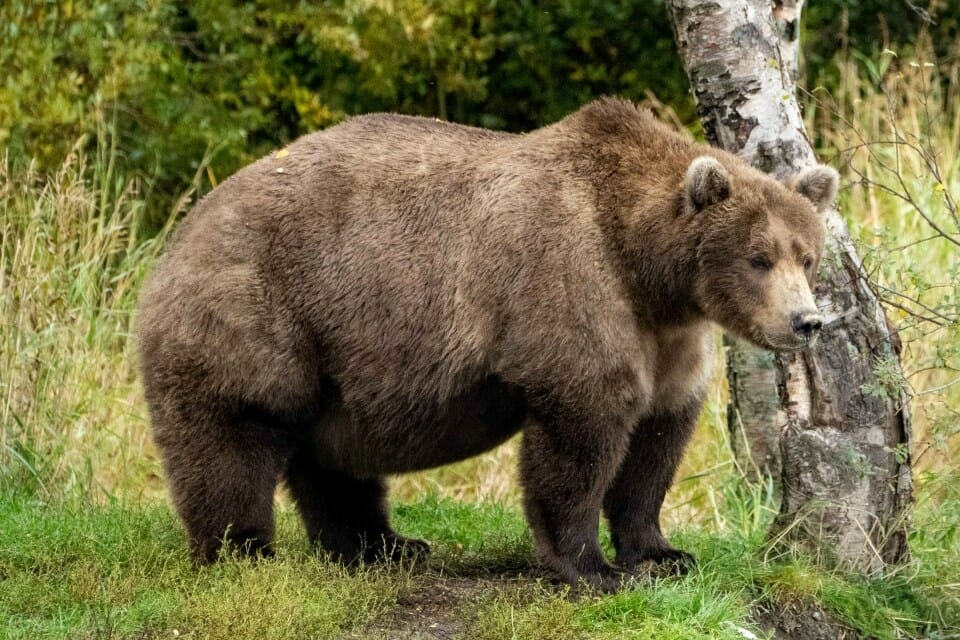 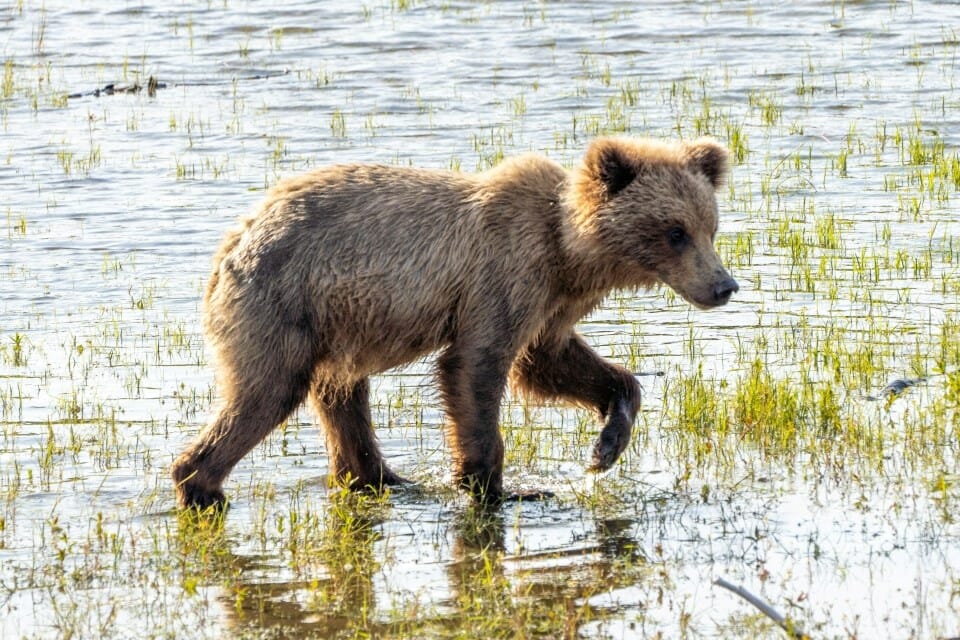 909’s cub was first seen at Brooks River in 2021 as a female spring cub, or first year cub. As a yearling, she has developed a medium-brown coat with round and fluffy ears. 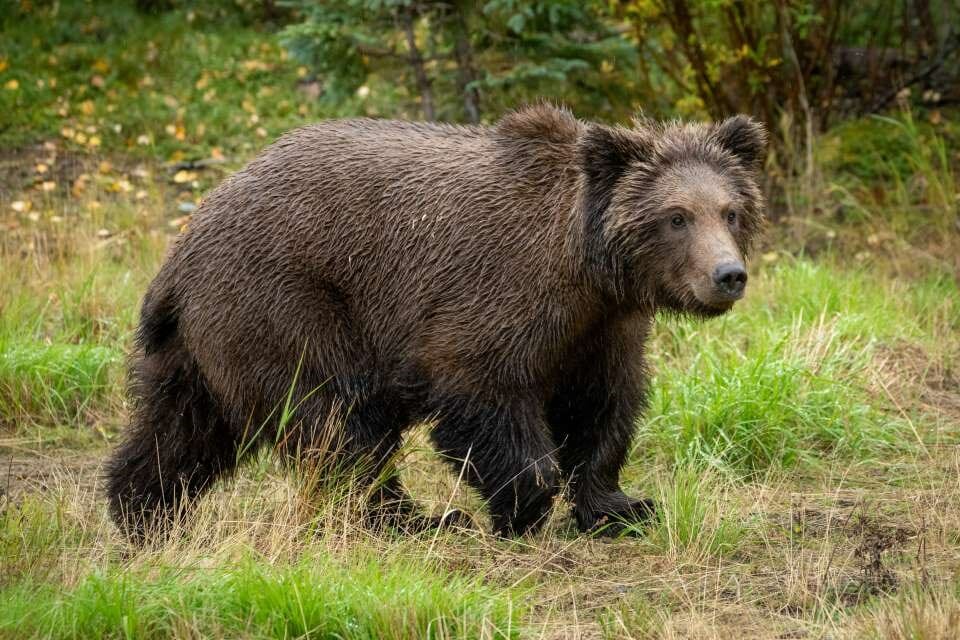 Fat Bear Week has already begun! The event started at 12PM EST on October 5, and will conclude on October 11.

How can I participate in Fat Bear Week?

During this week, there will be a series of online chats on explore.org featuring Mike Fitz, explore.org’s resident naturalist, and rangers from Katmai. These chats focus on both the individual bears and Katmai’s healthy ecosystem.

The explore.org bear cams also offer fans an up-close look at the lives of the bears of Brooks River. Throughout the season, you can tune in to watch the bears fish for salmon, play in the water, and lounge on the banks. You can also learn about the bears’ unique personalities and see how they interact with each other. In addition to the live cams, there are also special live events hosted weekly throughout the season.

Fat Bear Week is an annual event that takes place in the last week of October. During this week, viewers around the world vote for their favorite brown bears from Katmai National Park & Preserve. The results of the contest are announced near the end of October. This year, make sure to tune in and cast your vote for your favorite bear!