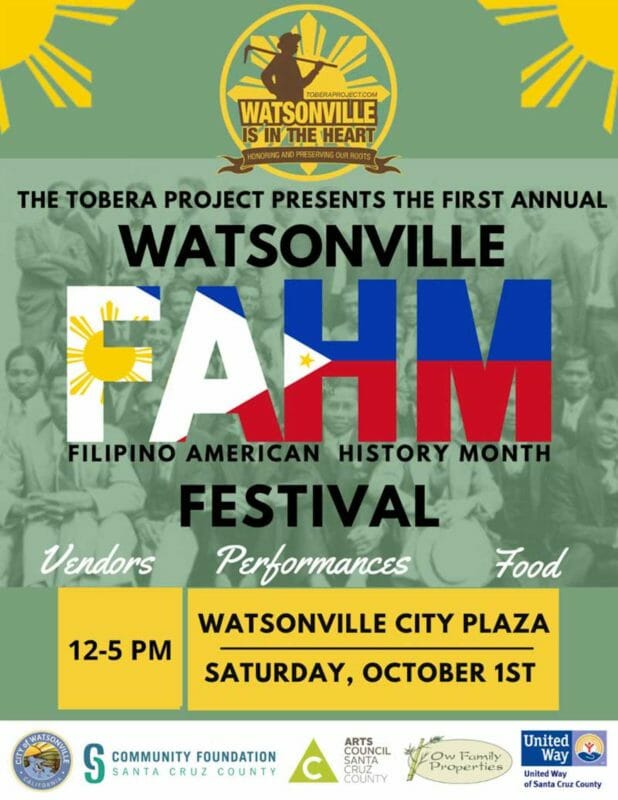 Watsonville, California, historically infamous for anti-Filipino riots in 1930, will celebrate Filipino American History Month Saturday, Oct. 1 to mark the first recorded presence of Filipinos in the continental United States in 1587.

The festival will take place in Watsonville City Plaza from 12-5 p.m. History Month was first introduced in 1992 by the Filipino American National Historical Society, and was officially recognized by Congress in 2009.

Despite Filipino presence of more than a hundred years, Watsonville had not celebrated Filipino American History Month, which other cities have been commemorating for a while.

This weekend’s festival is being hosted by the Tobera Project, which was formed in 2019 to honor the memory of Fermin Tobera, the lone fatality during the riots, when white mobs attacked Filipino labor camps.

Researchers at UC Santa Cruz, Santa Cruz Museum of Art and History and other local groups, created “Watsonville is in the Heart,” an ongoing digital archive chronicling the history of Filipino families in the Pajaro Valley, according

Roy Recio, lead organizer of the Tobera Project, told The Pajaronian that the City agreed to hold the celebration. He named Mayor Ari Parker, City Manager Rene Mendez, as well as Parks and Community Services’ Nick Calubaquib and Jessica Beebe as big supporters of the project. Recio also praised program coordinator Amanda Gamban as a main driver of the festival.