Cabanatuan POW camp in WWII was ‘Hell on Earth’

Cabanatuan POW camp in WWII was ‘Hell on Earth’ 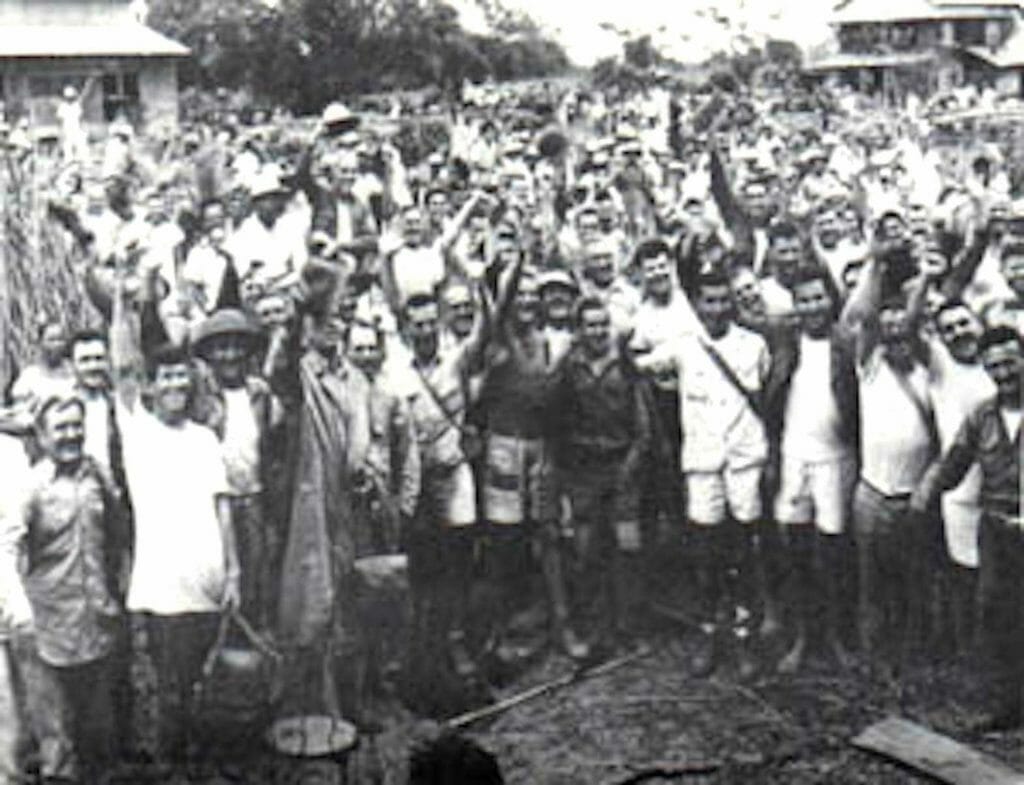 Newly freed POWs with some of their liberators.

On January 30, 1945, a combined force of United States Army Rangers, Alamo Scouts and Philippine guerillas liberated the Cabanatuan prisoners-of-war camp in Nueva Ecija, Philippines. The rescue of the emaciated American POWs, dubbed the “Great Raid,” has been made into movie.

The POW camp was 30 miles behind Japanese lines. Filipino guerrillas had provided the intelligence on the camp to the 6th U.S. Army, which had recently landed at Lingayen Gulf. There were considerable fears by the senior officers that the desperate Japanese prison guards might execute the POWs.

A recent barbaric massacre of the American and Allied POWs had taken place on Palawan Island. The men at Cabanatuan had survived 34 months of imprisonment under horrible conditions. They deserved a rescue attempt behind enemy lines.

General Walter Krueger, the head of the Sixth Army, approved the daring raid on Cabanatuan. He assigned the 6thRanger Battalion, commanded by Lt. Colonel Henry Mucci. The commander chose his Company C under the leadership of Captain Robert Prince. A contingent of elite special forces called the Alamo Scouts were also tasked for the operation. Two companies of Philippine guerrillas provided guides on the march to the camp. The guerrillas were also assigned to counter a Japanese Army camp of 5,000 men nearby in Cabanatuan City.

The raid on Cabanatuan was flawless. The raiders were able to liberate over 500 American POWs. The logistical planning had considered that many of the POWs would not be able to walk the distance to the American lines. The guerrillas provided carabao carts for the men who were unable to walk.

The Cabanatuan POW camp was established in June 1942. The site had formerly been a Philippine Commonwealth Army Training Camp. It was located close to Cabanatuan City, which had a population of 50,000 residents in 1942.

The site was chosen as a replacement for Camp O’Donnell in Tarlac Province. O’Donnell had become a death camp. The men who had survived the infamous “Bataan Death March” had succumbed to diseases and illness shortly after their arrival at O’Donnell. One out of ten American and Filipino POWs died at the camp.  There were 30 to 40 deaths per day, and ultimately 1,500 Americans had died at O’Donnell.

By September 1942, the Japanese had decided to parole the Filipino POWs at Cabanatuan and other POW camps. This was an attempt to win the hearts and minds of Filipinos for the Japanese occupation of the Philippines. The parolees had to sign an oath that they would not become guerrillas. The mayors of the parolees’ hometowns were responsible for the conduct of the former Filipino soldiers.

A POW hut in Cabanatuan camp.

Cabanatuan soon became the primary POW camp for the entire Philippines. All other camps were satellites of Cabanatuan. The Japanese Army’s goal for the camp was to screen POWs for workers. These workers were assigned to projects such as road and airfield construction at multiple locations. Some of the men were sent to Korea and Japan to be essentially slaves for the Japanese war machine.

Over time, 9,000 POWs passed through Cabanatuan. Approximately a third of them died at the camp and were buried on nearby grounds. In June 1942 alone, 503 men died at the camp.  By July that year, some 786 men had died. Finally, there were no deaths in December 1942.

The decrease in deaths was not the result of Japanese competence, but by the POW oversight and control of the conditions. The POW leadership instituted sanitation and public health protocols. Prisoners who had medical training set up a “hospital.” With this self-administration, the POWs thought that they had gained a semblance of control over their lives.

There was also an improvement in prisoner morale. The streets of the camp were named Broadway, Main Street, and 5th Ave. Sports fields were created along with a library, a musical band, schools, horseshoes, Ping Pong, and bible study. Navy POWs routinely rang bells, which provided stability and comfort.

The prisoners were assigned work parties outside the camp. The vegetable garden was known as “The Farm.” It provided a steady source of nutrition for the men. The highlight of Christmas 1942 was receiving a care package from the American Red Cross.

As the months passed by, monotony followed by depression was the biggest problem for the men. The POWs were a hardy group of self-reliant men, but time wore them down. Incidences of stealing, hoarding, and scheming were becoming common. As food and medicine became scarcer, malnutrition and tropical diseases were taking their toll.

The arrival of American airplanes flying over the camp brightened POWs spirits. The hope of liberation was tempered by the fear of being killed by the petrified and untrained camp guards. Fortunately, a combination of accurate intelligence from Filipino guerrillas, the willingness and foresight of senior American officers, and the superb operation of well-trained soldiers led to the dramatic raid at the Cabanatuan POW camp.

Dennis Edward Flake is the author of three books on Philippine-American history. He is Public Historian and a seasonal park ranger in interpretation for the National Park Service at the Eisenhower National Historic Site in Gettysburg, Pennsylvania He can be contacted at: [email protected]