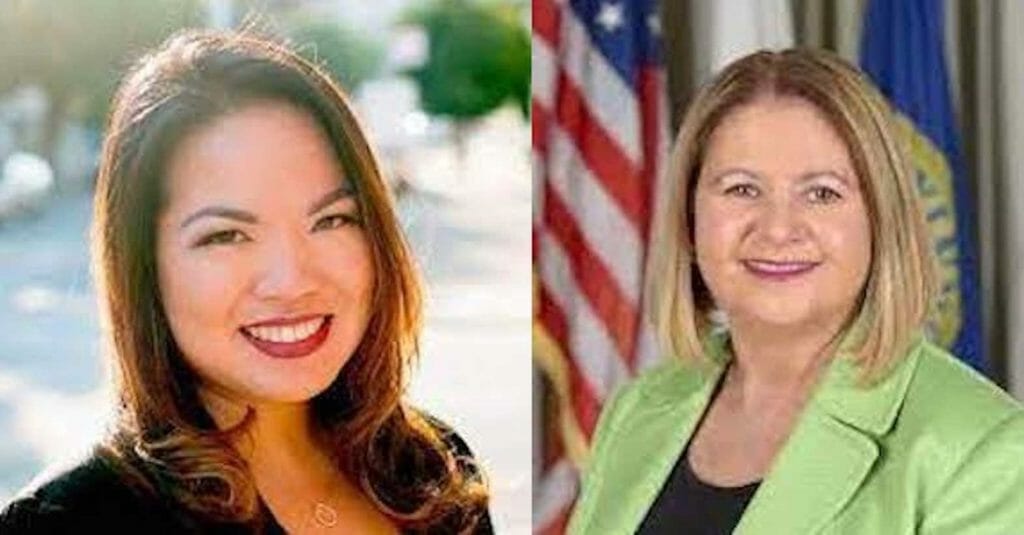 Councilmember Juslyn Manalo (left) accused Councilmember Pamela DiGiovanni, whom she said had been bullying her, of slamming a door on her back, causing injuries. TWITTER/DALY CITY.GOV

Councilmember Juslyn Manalo tearfully accused Councilmember Pamela DiGiovanni, whom she said had been bullying her, of slamming a door on her back, causing injuries.

She released photos on social media of herself with her arm in a sling and of bruising on her back.

Manalo spoke of the incident during a council meeting Monday, Sept. 26, saying “Councilmember DiGiovanni assaulted me in City Hall.”

Juslyn Manalo released photos on social media of herself with her arm in a sling and of bruising on her back. TWITTER

Manalo said she walked into a conference room in City Hall Monday afternoon when DiGiovanni told her she was in a meeting and allegedly slammed the door on her back as she was on her way out, NBC Bay Area News reported.

Manalo said she was shocked, broke down in tears and called paramedics as well as filed a police report. She is also asking the city for an internal investigation, saying it was not an isolated incident.

DiGiovanni denied the incident during the council meeting, saying she “would never do such a thing” and the accusation was “politically motivated.”

DiGiovanni is running for re-election, and Manolo has endorsed three of her opponents for city council seats.

Manalo has hired an attorney and is mulling possible civil action against DiGiovanni.

Last year, during a council meeting, DiGiovanni accused Manalo, who was then-Mayor, of a conflict of interest while working with a group teaching self-defense to Asian Americans and Pacific Islanders, according to NBC Bay Area News. The state fair political practices commission concluded there was no conflict of interest case against Manalo.