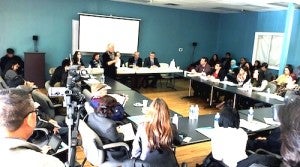 Officials from the Federal Trade Commission and California’s justice department  hold a briefing for ethnic media and community groups on scams that target immigrants and minorities. NAM

FRESNO, California — Fresno and Merced-area residents reported paying nearly $3 million to scam artists in 2016, according to state and federal officials. But that figure may be just the tip of the iceberg, they say, as victims are often reluctant to file a complaint.

“We’re here to ask for help,” said Nicklas Akers, senior assistant attorney general with the Consumer Law Section of the California Department of Justice (CDOJ). “Only through community complaints and dialogue does law enforcement know about the problem.”

Akers spoke during a community roundtable in Fresno last week organized by New America Media. He was joined by officials from the Federal Trade Commission (FTC).

Both agencies shared concerns over the deceptively low rate of complaints filed in the Valley, and encouraged residents to file reports when they are victimized by scams.

While anyone can fall prey to a scam artist, officials say immigrant, low-income and minority communities in the Central San Joaquin Valley are among the most frequently targeted by fraud. Language barriers and unfamiliarity with the U.S. government make them attractive targets for would-be scammers.

Undocumented communities are especially vulnerable, with fears of deportation preventing victims from interacting with authorities.

Instead, many turn to a notary public, or “notario,” for legal help. But, unlike in Mexico, where notarios are licensed to practice law, in the United States that isn’t the case. The confusion has opened the door to a number of immigrants and their families falling victim to scams.

Worker’s compensation fraud is another common scam in the Valley, said Edith Treviso, chief of financial crimes with the Fresno County District Attorney’s Office. The cases typically involve a scam artist working with attorneys and doctors to orchestrate kickbacks for an individual worker’s compensation claim.

Doctors get money from tests and referrals without ever actually treating the patient’s injury, while the attorney’s claiming to represent the victims mishandle the case.

“Many of the workers don’t understand what their rights are in the system,” she said. “They’re unfamiliar with the worker’s compensation process so they don’t know what to do.”

The trend originally came to her office’s attention because of referrals to investigate individual employees claiming worker’s compensation. From there Treviso said the unit traced the cases back to a network of doctors and attorneys who were in on the scam.

While there is growing awareness in the community for that particular scam, victim’s advocates say many Valley residents still suffer in silence.

“Our biggest message that we want to get out there [to residents] is that we will protect them and we want them to come forward,” said Sabrina Ashjian, deputy district attorney with the Fresno County District Attorney’s Office’s Consumer Fraud and Environmental Protection Unit.

“We really want these victims to come out of the shadows and share their story,” she continued.

Local officials are attempting to spread the word regarding scams and resources for victims through local ethnic news and radio, but Ashjian urged residents to avoid signing any blank documents, especially when approached by someone asking for money. Her office also advises residents to ask for a contract in their own language and follow-up with the Better Business Bureau or other reporting agencies when dealing with financial situations.

Even when residents do understand the language of a transaction, advocates warn they can still fall prey to scammers. During the roundtable, Fresno attorney Pahuoa Lor shared the story of a client who was contacted regarding bogus lottery winnings. In this case, Lor said the customer service representative spoke Hmong and was familiar with the culture.

Other scams she’s dealt with have involved intimidation and threats for victims who don’t immediately pay. Lor said she recently had a client who called her in a panic over a debt collector who was threatening to have the woman arrested if she didn’t pay back an old cash loan in the next 24 hours.

“This was a well-educated woman. She had been raised here and yet she still felt intimidated and scared,” Lor said.

While each of her two clients managed to detect the scam before losing any money, Lor said others are not so lucky and feel too ashamed to report it.

Lue Yang, director of the Fresno Center for New Americans, agreed and said he’s heard from many Hmong families who don’t know how to report their loss.

“They share their stories with me but I do not know how to report such a scam,” he said. “I want to share with you to hear how we can change this. How we can report this and stop it from happening in our community.”

In Fresno County, Ashjian said anyone from the community can submit a complaint to the DA’s office on behalf of someone else. The office can also pursue cases in criminal or civil court, depending on the circumstances.

“I tell people to call my office first before going to the police, because sometimes you can’t get a police report for this type of scam,” she said.

Residents are also encouraged to file complaints directly with the FTC. From there the report will go into a database for local agencies to view.

“Don’t think anything is too small for us,” said Thomas Dahdouh, regional director of the FTC’s Western Region. “We know there’s more complaints out there and we really want to hear more about problems locally.”

The FTC may not investigate every report, but officials say the agency monitors trends to help build larger cases.

Consumers can also file complaints directly with professional boards like the State Bar of California to help hold members accountable.

“There’s many different ways to get scammers or fraudulent professionals,” Dahduoh said. “We’re here to help and protect residents, but we need to hear from you.”