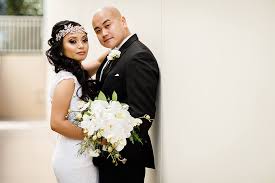 A wedding photo of Pauline Catibayan and husband, Paul Allen Mendoza. The two are facing charges of attempted murder. FACEBOOK

LOS ANGELES — A woman accused of helping her husband evade capture after he was named the suspect in the shooting of an elderly Baldwin Park couple could soon be out of jail following a bail hearing on Monday, March 26.

Pauline Catibayan, 31, who is accused of acting as an accessory to the crime after the fact, was apprehended with her husband, Fil-Am Paul Allen Mendoza, 34, near Horseshoe Bend, Idaho, roughly 900 miles away from the scene of the crime, on Wednesday, March 7.

Mendoza, a licensed bankruptcy attorney, remains in custody on two counts of attempted murder after police found two of his former clients suffering from multiple gunshots in their home on the 14700 block of Olive Street on Tuesday, March 6.

On Monday, Judge Victor Martinez agreed to reduce the value of Catibayan’s bond from $2 million to $150,000.  In exchange, the mother of three surrendered her passport and will be required to wear a tracking device while out on bail.

Catibayan’s father wiped tears from his eyes as his daughter sat behind her husband in the jury section of the sparsely populated courtroom. The defendants spoke quietly with their attorneys and exchanged glances with less than a handful of friends and family in attendance, but otherwise remained silent for the duration of the ten-minute hearing.

A court date originally scheduled for Monday, April 2, has been pushed back by more than two weeks to allow attorneys on this case more time to review evidence. Allen and Catibayan will reappear for a preliminary hearing on Thursday, April 18, before going on to face a jury of their peers, unless a plea deal is reached.

Police say the shooting stemmed from a dispute regarding money. If convicted, Allen could serve a life sentence and Catibayan could spend as much as three years in a state prison. Neither defendant has any history of prior convictions.

The victims of the shooting have yet to identify themselves or come forward with a statement.  No persons claiming to be present on their behalf had been observed at any of the proceedings.