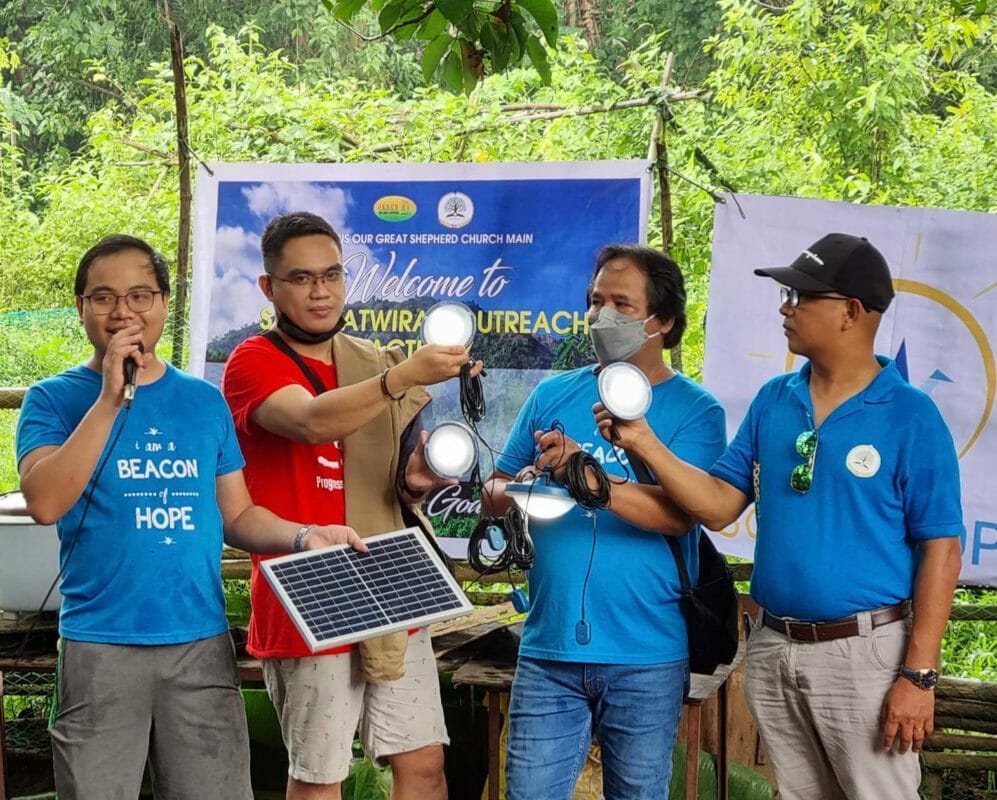 Through its Electrify My World Program, Calgary-based PAC has helped light up all of the 91 households in San Rafael, Rizal. CONTRIBUTED

RED DEER, Alberta – Calgary-based charity Progressive Assistance Canada Charity (PAC) on Aug. 29 finished its last of four distributions of solar lamps in the community of San Rafael, Rizal, some 36 km from the Philippine capital of Manila.

The community, located in the mountainous region of Rodriguez, Rizal, is home to Aetas, the Philippines’ earliest indigenous group. Through its Electrify My World Program, PAC has helped light up all of the 91 households in San Rafael.

Fortunately for the community of some 300 residents, PAC is lining up clean water supply as its next project. which is now in early phases, thanks to its Water Gives Life Program.

PAC was introduced to the San Rafael Community by Mark Napao, founder of Solar Hope (SH) Philippines, a Filipino NGO focusing on electrification of remote, impoverished communities in the Philippines.

As PAC was launching its new solar electrification program, it found a partner in SH to distribute the solar lamps to the SRC residents. Each solar lamp costs P4,500 ($125 CAD) and contains a panel and one master lamp that holds a rechargeable battery. The master lamp is portable and connects to three more light extensions which are typically mounted in bedrooms.

PAC adopted the community only in February, starting its operations outside Manila for the first time after almost 6 years of operations in the Philippines.

“They have limited to no access to electricity and potable water, which is the reason why PAC adopted the community and launched its new [electrification] program,” said Philippe Blanchard, PAC founder and executive director in an interview with INQUIRER.net.

PAC observed far-flung areas rely on hazardous, costly kerosene or candles to light their homes, and many suffer in the dark with no alternative.

PAC Director of Strategy and Development John Salazar started volunteering for the charity in March 2021, saying it was his way to give back to his roots.

A coworker whose family in in Tondo, Manila, infamous for the gritty realities of urban poor, received help from PAC told Salazar about the organization.

Salazar’s family moved to Canada in 2001 when he was 12 years old, finishing his later years of high school. He has a degree in mechanical engineering and works for TC Energy, an international power-generation company based in Calgary.

In 2019, his family once again moved to Lac La Biche, a close-knit community in northern Alberta.

“I discovered a small town with a massive Filipino community. It was here that I reconnected with my Filipino roots, learned about the diverse background of Filipinos who migrated here from all over Philippines and all walks of life, but there was one thing common – they were all giving back to the Philippines in some shape or form to help lift their families and have a more comfortable life,” he said.

“At the height of the pandemic in late 2000, a lot of things in life slowed down and it gave me an opportunity to reflect on the blessings we have. It was through this reflection that I remembered what poverty was like in the Philippines and inspiration from the Filipino community in Lac La Biche that had me searching for a way to give back to my roots,” he added.

This self-discovery led him to become one of PAC’s many volunteers and eventually acting as one of PAC’s formidable leaders.

“PAC aims to create self-sustaining, thriving barangays (villages) which can provide future generations the resources and opportunities necessary for success by mitigating risks associated with the cycle of poverty, limited access to resources, economic opportunities paired with an ever-increasing population,” said founder Blanchard.

The charity, founded in Canada in May 2016, performs all of its administration and support to its Philippine operations from Calgary.

Barangay 128 also known as Smokey Mountain located in Balut, Tondo was one the first beneficiaries of PACs charitable projects. The urban poor community consists of thirty tenement buildings that house some 30,000 residents was adopted by PAC in 2018.

Maralla, an informal settler community of approximately 500 residents located within the tenement housing in Balut was the first to receive PAC’s assistance in 2016, which expanded to the tenement building dwellers.

At present, PAC is working with Bgy. 128 leaders and members to develop a community garden model under its Planting the Seed program, a need the group noted was further highlighted by the Covid-19 pandemic when food security became more unstable in the already impoverished community.

“When PAC is invited by a community into their lives, we all become part of their family. PAC is an active partner for our adopted communities in our mission to relieve hunger and poverty, and promote education and healthier living to create a stronger and more sustainable future,” added Blanchard.