Two men suspected of killing 10 people in a stabbing rampage that devastated an indigenous community in Canada were at large on Monday as authorities tried to determine a motive for attacks that shocked a nation where mass violence is rare.

Police launched a manhunt for Damien Sanderson, 31, and Myles Sanderson, 30, after they allegedly stabbed people in 13 different areas across an indigenous community and its surrounding province on Sunday. At least 15 others were wounded.

The attacks in Saskatchewan province were among the deadliest in Canada’s modern history. A statement by indigenous leaders indicated they may have been drug-related. Police said some of the victims appeared to have been targeted, while others were apparently random.

Police are expected to provide an update at 12:30 p.m. EDT (1630 GMT). The suspects were last seen traveling in a black Nissan Rogue and spotted on Sunday in the city of Regina, about 320 km (200 miles) south of the attacks in the James Smith Cree Nation and the village of Weldon, police said.

In an update on Monday morning, police said the suspects were still at large and urged residents to call authorities if they had information that could help in tracking the two men. 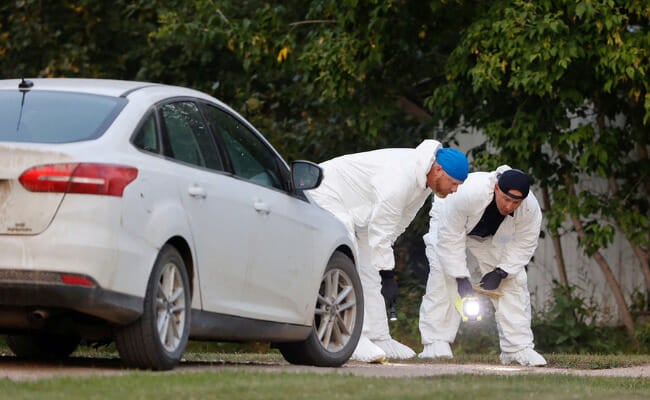 A police forensics team investigates a crime scene after multiple people were killed and injured in a stabbing spree in Weldon, Saskatchewan, Canada. September 4, 2022. REUTERS/David Stobbe

Doreen Lees, 89, said she and her daughter were sitting on their porch in Weldon on Sunday morning when a dark SUV quickly sped past, an unusual sight in the small village.

Shortly after, a man approached them saying he was hurt, Lees said, adding that he stood around 10 feet away and had his face covered. Her daughter ran inside to call the police. But then the man took off, she said.

“At the time the person didn’t make us feel nervous. We just thought he was hurt and he needed some help,” Lees said. “But he didn’t stop and wait for the help, then we wondered ‘What is going on here?'”

Indigenous people account for less than 5% of Canada’s population of about 38 million and suffer from higher levels of poverty and unemployment than other Canadians and also have a shorter life expectancy.

Prime Minister Justin Trudeau said his government had been in direct communication with the James Smith Cree Nation leadership, adding, “we are ready to assist in any way we can.”

James Smith Cree Nation is an indigenous community with a population of about 3,400 people largely engaged in farming, hunting, and fishing. Weldon is a village of some 200 people. 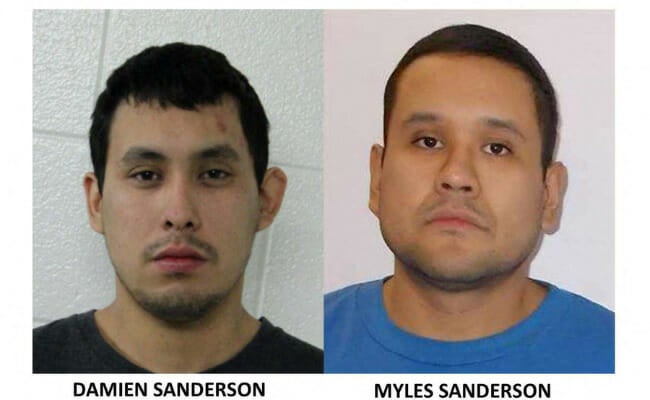 Damien Sanderson and Myles Sanderson, who are named by the Royal Canadian Mounted Police (RCMP) as suspects in stabbings in Canada’s Saskatchewan province, are pictured in this undated handout image released by the RCMP September 4, 2022. RCMP/Handout via REUTERS

Residents of Weldon identified 77-year-old Wes Petterson, a widower, as one of the victims of the stabbing. Lana Head, a mother of two, had also been killed, her former partner said.

The suspects were likely in Regina, the city’s police chief, Evan Bray, said in a Twitter video late on Sunday. But authorities have warned it was not clear where they might be headed or if they had changed vehicles.

The two men share the same last name but it was not clear if they are related or come from the same community.

Police bulletins urged people to take precautions including sheltering in place while warning against picking up hitchhikers or approaching suspicious people.

“Do not leave a secure location. Use caution allowing others into your residence,” one advisory said.