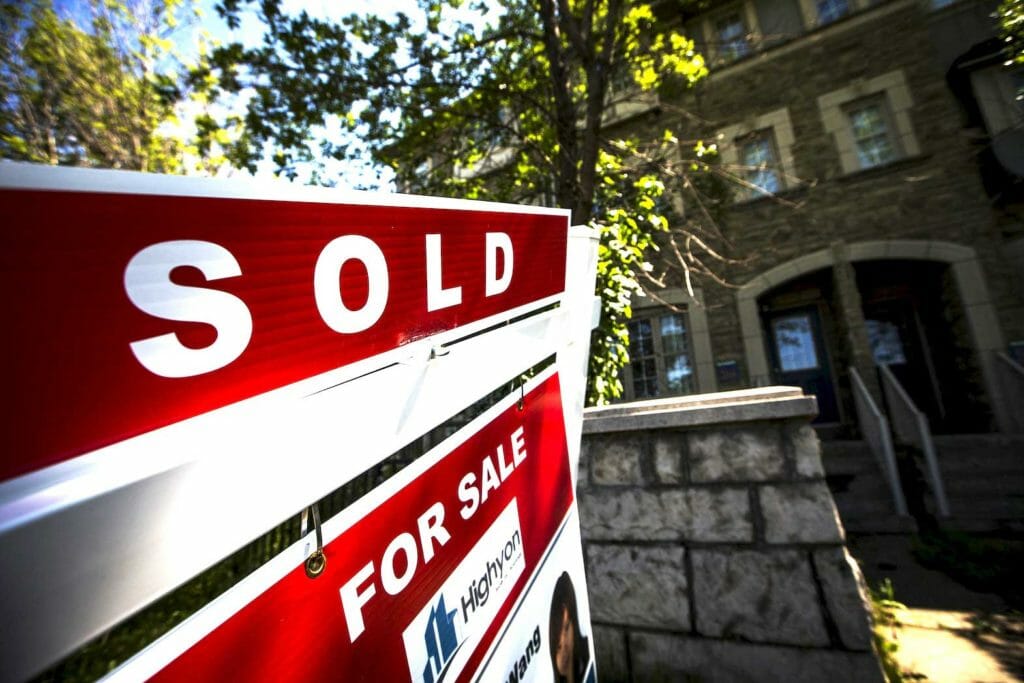 A “For Sale” sign stands in front of a home that has been sold in Toronto, Canada, June 29, 2015. REUTERS/Mark Blinch/File Photo

TORONTO – Canadian home buyers are shifting to fixed-rate mortgages at the fastest pace in a year, on bets that more rate hikes from the central bank are in store to bring inflation under control, even as the cost of these home loans remains close to the highest level since 2009.

Borrowers are also increasingly eschewing the popular five-year fixed mortgage term in favour of two- or three-year loans, to guard against the possibility that the Bank of Canada’s rapid rate hikes push the economy into a recession and result in another easing cycle.

More than half of Canadian home buyers opted for variable-rate mortgages since July 2021, as these became cheaper relative to fixed.

Now, that is reversing, returning to the historic norm. Fixed-rate mortgages made up 49% of all home loans in May, according to the latest data from the Bank of Canada, up from 43% in March, the lowest proportion since the Bank began tracking the data in 2013.

James Laird, co-founder of mortgage rate comparison site Ratehub.ca said the trend has continued, estimating that fixed-rate mortgages accounted for more than half of all new home loans in July.

“If (current economic conditions are) keeping you up at night, the best thing to do is get a fixed-rate mortgage and forget about it,” Laird said.

Borrowers are increasingly opting for this certainty, even though the fixed rate is still just a sliver below a 13-year peak hit in mid-July. This means they could face elevated payments for longer if rates do decline in the next two to three years. Refinancing can be a somewhat costly option.

The best discounted five-year fixed rate is 4.24%, while the variable rate is 3.5%, the narrowest gap since September, another factor driving more borrowers to the former.

Variable loans are tied to the Bank of Canada’s benchmark rate, which is up 2.25 percentage points since March. Fixed rates move alongside longer-term bond yields, which have fallen below shorter-term yields, a sign that markets fear a recession.

Michael Driscoll, head of North American financial institutions at DBRS Morningstar, said if the economy slips into recession due to aggressive interest rate hikes, fixed-rate borrowers will be locked into higher payment even when variable rates come down, which would crimp their spending elsewhere.

While higher delinquencies and associated losses are inevitable when rates rise rapidly, the financial system is unlikely to take a hit given the significant equity that backs these mortgages, Driscoll added.

Canada’s biggest banks’ outstanding uninsured mortgages, which account for the majority of their portfolios, equate to about 50% of the value of the homes they’re backed by, according to their latest financial statements. The loan-to-value ratio on new originations is at or below 70%. Uninsured mortgages require a down payment of at least 20%.

Borrowers are also increasingly considering shorter-term fixed-rate home loans, which have typically been seen as riskier as they expose them to higher rates upon expiry, but the current environment is making them more appealing.

Mortgages of less than five years made up 53% of fixed-rate home loans in May, from 51% in January, Bank of Canada data shows.

“In January, it was ‘give me your lowest rate and lock it in for as long as you can’,” said Mark Ostland, director of mobile experience at Meridian Credit Union. But now, “we’re having tons of conversations, and… definitely, a shorter term is in that conversation.”