WEST HOLLYWOOD – “Easter Sunday’s” cast members told the media that the movie is important not only for the Filipino community, but also for the Asian American and Pacific Islander  movement and immigrants who have moved to this country but do not feel seen or heard.

The weekend before the movie’s premiere, Universal and the “Easter Sunday” team held a press junket at the London Hotel.

“It honors the Filipino immigrant experience, recognizes and embraces the specific cultural details and differences that distinguish us as a community, but also demonstrates how universal the concepts of family, commitment, and caring for one another are,” Butiu shared.

The  comedy film based on Jo Koy’s life experiences, in which he plays the role of Joe Valencia.

“We wanted to make a funny film that would appeal to a wide range of audiences, and the representation will sort of take care of itself,” said director Jay Chandrasekhar, who also plays Joe Valencia’s agent, Nick.

The cast shared their experiences working with Jo Koy and their gratitude for his efforts in creating a film like “Easter Sunday.” After spending over 30 years building a career and selling out massive arenas during his comedy tours, Jo Koy pitched movie to Steven Spielberg’s Amblin.

Joey Guila stated, “Working with Jo Koy taught me that he is the hardest working man in show business!”

Guila plays the character Tito Manny and has been part of Jo Koy’s Standup Comedy tour since finishing the film Easter Sunday, “His journey has inspired me to become a lot more passionate about standup; I love being able to say that my best friend is one of the greatest!”

“He’s just so generous and kind, and he sets the tone for everyone,” said Tia Carrere who plays Tita Theresa. “Cheering for us from behind the camera!”

“Jo was a natural after a few takes on the first day and he was just very comfortable,” said Jimmy Yang, one of the producers and who plays Marvin in the film. 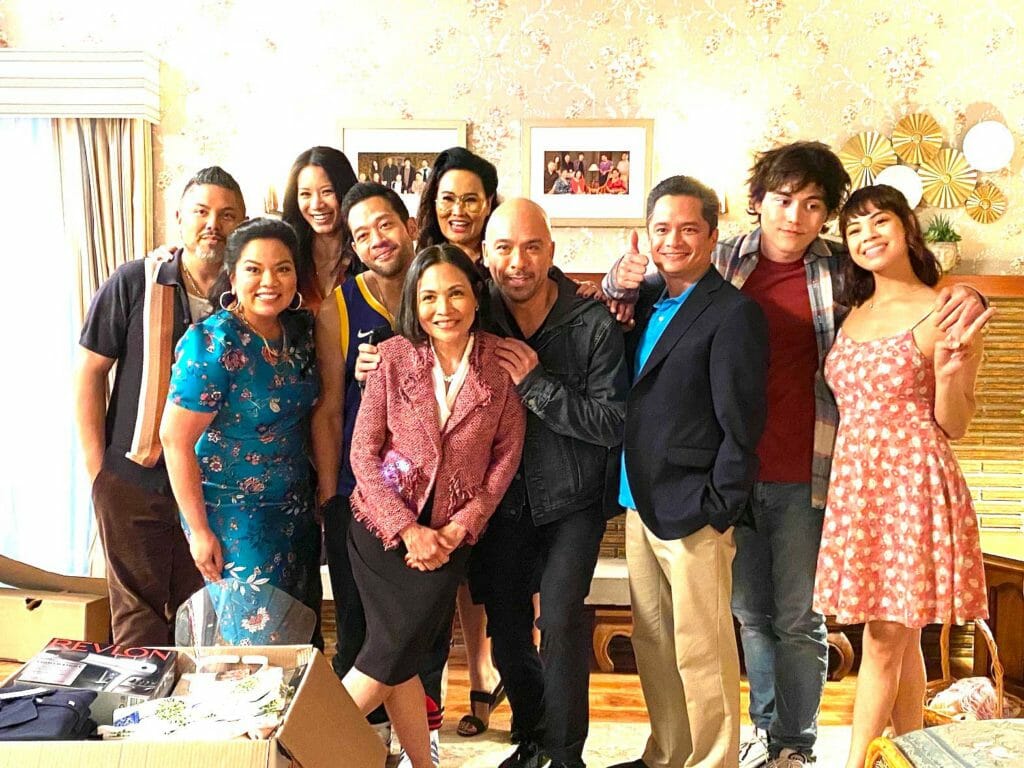 “As we prepared to film the scene where we meet Joe and Junior before church, I asked if I could try a sniff-kiss, which is such a loving, affectionate gesture that reminds me so much of my own Titas and Lolas.” We threw it in, and I’m so glad the scene made it!” Butiu shared.

Carrere put in recognizable Filipino body language: “I wanted to make sure I could point at things with my lips.”

“He has always found the [Sto. Niño figurine] quite scary and is constantly being spooked by it!”

Chandrasekhar explained why the Sto. Niño became a focal point.

The cast found their own experiences to be relatable to Jo Koy’s.

“I dated a Filipina in high school and I was very connected with her family,” Chandrasekhar said of his firsthand experience with Filipino culture.

“I can relate to the bickering Aunties and funny Uncles,” Chandrasekhar added, noting that the Indian and Filipino cultures are similar because both peoples learn and speak in English.

Yang explained about how he can identify with Jo Koy’s character Joe: “When I told my father I wanted to be a stand-up comedian. He asked, “What is stand up, is it a talk show?”

“My sister-in-law is really good at arranging the balikbayan box. So whenever, whenever she sends one, she’ll always call my sister and I, and to see if we’re sending anything,” said Gaston.

“Seeing ourselves on the big screen is a validation!” Gaston beamed.

“So, after the premiere, after all of these interviews, I’m going to invite everyone over!” Yang said in celebration.

“A lot of my family that I have not seen in years are all gathering together to watch like it’s a Pacquiao Fight!” said Guila.

“Easter Sunday” is now out in theaters across the U.S.