The Blinken-Bongbong Show: Friends in need

The Blinken-Bongbong Show: Friends in need 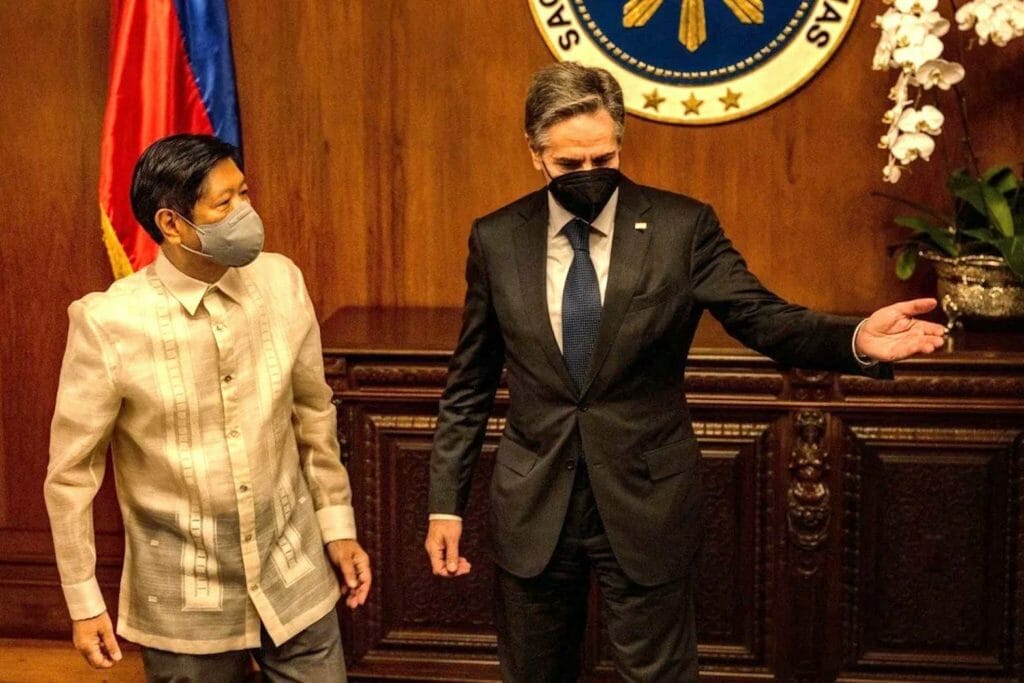 Philippine President Ferdinand Marcos Jnr (left) and US Secretary of State Antony Blinken during their meeting in Manila on Saturday. Photo: Reuters

In the shadow of U.S. House Speaker Nancy Pelosi, U.S. Sec. of State Antony Blinken was also in Asia this past week.

Not starting any extreme war games with China’s missiles flying over Taipei, but engaging in his own modern diplomatic games, nevertheless.

It was the Blinken and BongBong show in the Philippines! And it was what you’d expect from a second coming of a Marcos. Be like Dad. And the U.S. will comply. And everything will be fine. We hope.

The U.S. secretary of state assured the newly elected President Marcos Jr. that the U.S. would be there to support the Philippines, thanks to the existing Mutual Defense Treaty.

It’s the same treaty that has been in place since before Marcos’ dad, the autocrat Ferdinand Marcos Sr. The treaty binds the U.S. and the Philippines to aid each other in event of an attack in Asia. Not bad in pre-Marcos Sr. era considering the fledgling democracy, but surely a problem once Marcos Sr took over.

You’ll recall that was no democracy, but an autocracy the U.S. supported during martial law. Democracy was only restored in the Philippines when people power kicked out the dictator.

But it shows you how flexible U.S. support for “democracy” in Asia can be.

Perhaps the Blinken meeting with Bongbong would have taken place anyway, but it was all different once Pelosi stepped foot in Taiwan. And that was an important and necessary trip.

“We cannot stand by as the CCP  (Chinese Communist Party) proceeds to threaten Taiwan — and democracy itself,” Pelosi explained  why she went to Taipei in a Washington Post opinion piece. “Indeed, we take this trip at a time when the world faces a choice between autocracy and democracy.”

And what choice has Bongbong made since getting elected? The scion of an autocrat who won by a landslide is seen more as a would-be strong man who needs a few more pumps in the weight room.

But it’s the nature of U.S. support. If you’re democratic enough, the U.S. will have your back. And prop you up—if it’s in America’s mutual interest.  And certainly, right now, it is.

The Philippines had cool relations with the U.S under President Duterte through presidents Obama and Trump. Duterte constantly talked of testing the Philippines’ friendships with Russia and China.

Now however, given the new political temperature in Asia, it’s practically nouveau little brown brother time. Both the U.S. and the Philippines could use each other’s friendship.

This is the power of history. Having a history with each other matters. You’re drawn to one another/ You trust each other’s devils and angels.

But where was the U.S. during the Spratly/West Philippine Sea controversy within the last decade? You recall images of the ragtag Filipino Navy defending the islands against China.

It was a David vs. Goliath moment, and you didn’t see loud pronouncements from Washington about coming to the Philippines rescue.

Seems like after this week, there’s a greater willingness to do the very least–joint maritime patrols in the South China Sea. Suddenly, the Mutual Defense Treaty is seen as applicable.

“In our view, joint patrols between the Philippines and the [U.S.] can take place. They are under the ambit of the MDT, and also within the context of the Mutual Defense Board and Security Engagement Board. So, I think this is an issue that we’ll continue to explore bilaterally,” said Foreign Affairs Secretary Enrique Manalo during a virtual joint press conference with U.S. Secretary of State Antony Blinken on Saturday.

It’s been six years since the Philippines won a practically meaningless decision in the Hague against China for its aggressive incursions in the West Philippines Sea.  But it’s been largely ignored by everyone but the Philippines.

When Blinken acknowledged the sixth anniversary of that decision in June, it was a signal from the Biden administration. A return to a modern version of old colonial times? Possibly.

But Filipino nationalists have something to think about, too. After Pelosi arrived on Tuesday in Taipei, Michael Eric Castillo, deputy director general of the National Security Council (NSC) spoke on the radio program of the Philippine Air Force.

The country better hit the weight room. Or not.

You’ll recall when President George W. Bush asked for an alliance on the Gulf War, who was first to flex her biceps? Then Philippines President Gloria Macapagal-Arroyo. The mouse that roared.

The Blinken-Bongbong show then is a bit more positive than not. The Philippines is “important” again in the eyes of the U.S.  Both countries are getting sentimental out of necessity.

One big negative? On top of all the Duterte human rights issues of the past administration, the rekindled relationship does bring up all the bad U.S./Marcos history.

That may be enough to keep Bongbong from making the kind of decisions worthy of his infamous autocratic dad. As Asia enters a more dangerous new era, he’ll learn it’s still better to play ball with your former colonizer than not.

NOTE: I will talk about this column and other matters on “Emil Amok’s Takeout,” my AAPI micro-talk show. Live @2p Pacific.  On Facebook.com/emilguillermo.media;  my YouTube channel; and Twitter @emilamok  Catch the recordings on www.amok.com.

Emil Guillermo is a journalist and commentator. He writes a column for the Inquirer’s North American Bureau.