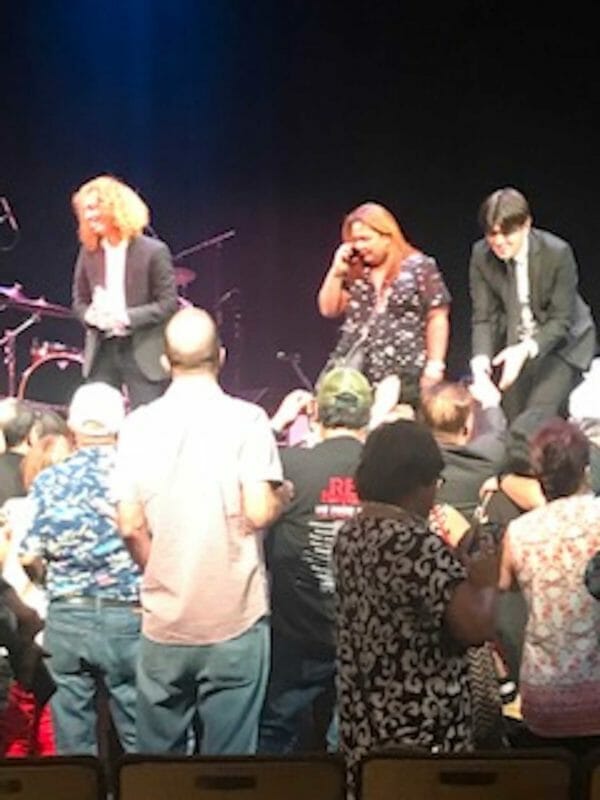 At the Aratani theater, the audience, mostly seniors, once more relived their generation’s music, prancing and swinging to “A Hard Day’s Night,” “I Saw Her Standing There,” “Eye in the Sky” by The Alan Parsons Project; The Bee Gees’ “ Stayin’ Alive,” and two dozen other favorites!

The irony of their music is that the none of the boys was around to actually witness their idols perform the songs  of that generation.  They listened to their father’s favorites on the radio and loved the tunes.

Soon, lead vocalist RJ started playing drums from a set made from tin cans covered with potato-chip bags. He then mastered playing the guitar and taught these skills to his other siblings.  “We continue to enjoy bringing back to our audience their years gone by,  through these musical revivals,” mused Raymart.

The five-member band rose to fame in 2013, emerging from the devastation of Typhoon Yolanda that ravished the country with its 120-mph torrential winds and floods.

It is well-known how the brothers survived that disaster with the rest of the family bundling a few clothes, crackers, candies and guitars to escape to Manila.

The siblings take pride in adapting the music of the ‘50s to the ‘70s and covering The Beatles, Bee Gees, The Dave Clark Five, Peter and Gordon, among other musicians of the era.

Already gaining popularity in hometown clubs and parties since 2005 for their smooth replication of the famous Liverpool mopheads’ hits, the  band was featured in the ABS-CBN Christmas Special 2013 at the Araneta Coliseum. Their story of survival touched the metro audience.

On March 14, 2014,  they fascinated an international audience at The Theater at Madison Square Garden in New York for the “Pinoy Relief Benefit Concert” ( for Yolanda victims), joining other performers such as Jennifer Hudson, Jessica Sanchez, apl.de.ap, Charice, among others.

The following September 17 they became the only Philippine musicians to be invited to perform at the historic Cavern Club in Liverpool England, the birthplace of The Beatles.

The audience, many of whom are members of their growing international fan clubs, gave RJ a standing ovation.  A Facebook post proudly reported that their fan clubs have grown from 22 members to 50,000.

He recalled that before Typhoon Yolanda hit his hometown in 2013, a businessman, Reynaldo Fuentes, heard them perform and gave his business card to contact them if they came to Manila.  In Manila, Fuentes linked them with other gigs which meant financial support to their family.

“Wala kaming balak umalis sa Tacloban, kontento na kami sa buhay namin sa probinsiya (We weren’t planning to leave Tacloban, we were contented with our life in the province),” said Raymart who is brother to eight other siblings.  The other members of the band besides Ronjoseph and Raymart are Reno, 32; Ralph, 26; and Roy Mark, 23.  REO comes from the first letters of their first name, middle name (Evasco) and last name.

sRJ’s and Raymart’s uncertainty about their futures seems to reference the calamities that have determined their professional fate— the devastation of one of the most powerful typhoons in 2013 and, seven years later in 2020, the worldwide pandemic.

Aster Abada of Seatstubs said the REO Brothers are expected to come back to the U.S. in two years, unless their growing popularity demands them to return sooner.  “Sa YouTube lang talaga sila nakilala lalo na nitong pandemic; sa susunod na tour nila, tiyak dudumugin na sila (They became popular mainly through YouTube during this pandemic; in their next tour fans will surely mob them)!” This current tour is produced by Amor Yu and promoted by Joel Sebag.