Did we appreciate enough the Fil-Am chief justice of California’s Supreme Court?

Did we appreciate enough the Fil-Am chief justice of California’s Supreme Court? 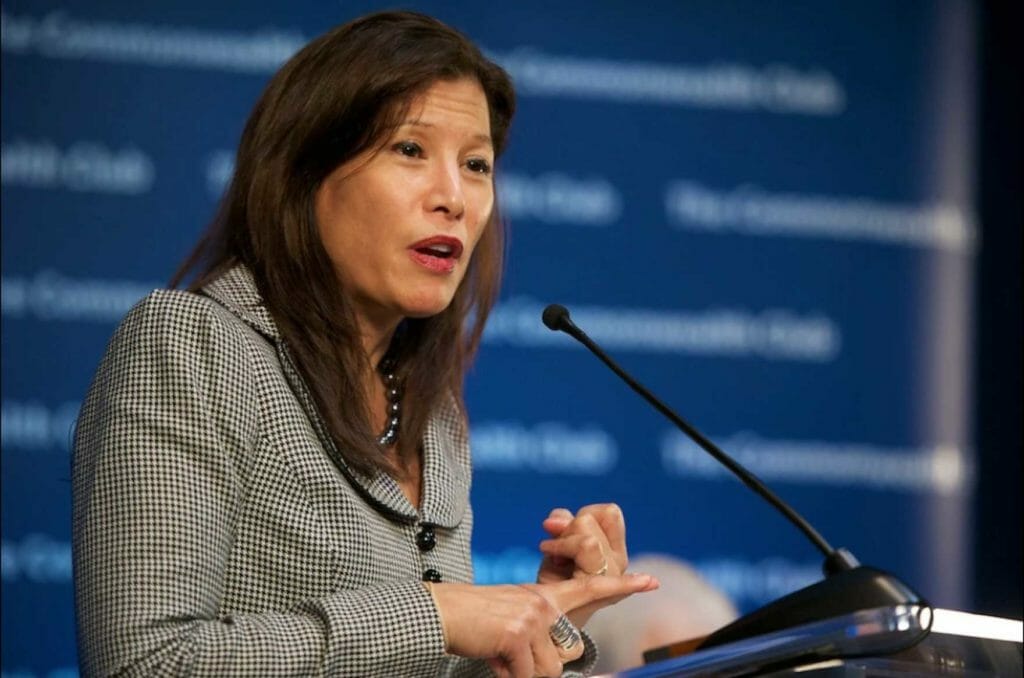 California Chief Justice Tani Cantil-Sakauye described the reaction from colleagues about news of her departure as “moans and groans and exclamations of concern and dismay and congratulations.”

Filipina matriarchal figures are a thing. Mom packs a wallop. From Marcos  to Aquino, strong women are common.

So when a Filipina rises to the top of her field, as the Chief Justice of the California Supreme Court, one wonders. Did we appreciate Tani Cantil-Sakauye enough?

Do this experiment. I’ve given you the answer, but ask any ten friends at random who the Chief Justice of the California Supreme Court is, and see how many can name the person on the spot. Don’t even mention a pronoun, and see if they just don’t assume it’s a man.

I’ll wait. How many did you get? See what I mean? Did they even get to mispronounce her name?

Compare that with the other high court in the land, the U.S. Supreme court. By now, anyone concerned about the rollback of social justice in America can name every single member of that court. That’s how political the high court has become. For every issue, we know the “count.”

We know the death knell of the 6-3. We know exactly who’s on the six and who’s among the three. We also know the hopeful, but ultimately failed, taste of the 5-4. From all perspectives.

You vote for president, and then the chief executive gets to pick, if partisan obstructionists allow.

It’s different in California, the most populous state in the nation with the most Asian Americans in the country. The governor gets to appoint a judge to a 12-year term, but that judge must be approved by a state commission, then a vote by the people. (Wouldn’t you like to vote thumbs up or down for SCOTUS justices?)

And for surviving all that, I’ll bet few in California (or anywhere else) would be able to name one or two of California’s seven justices. Hint: Two are Asian American. One is Associate Justice Goodwin Liu.

But the other one, an Asian American Filipina woman, is historic. She has been the chief justice of California’s high court for the last 12 years, the aforementioned Tani Cantil-Sakauye. (Of course, you can say her name, but just in case, here’s a pronouncer: Con-TEEL-Saw-ka-OO-yay.)

Her black robe wasn’t made of stealth material. But she is virtually unnameable. But maybe that’s good.

If a judge’s job is to stay above it all and concentrate on the work at hand, then the fact that Cantil-Sakauye is not exactly a household name testifies to her ability to have done her job exceedingly well. Impartially. Without hardly an objection. Without making the news.

That’s why I was shocked to hear Cantil-Sakauye’s announcement last week that at age 62, she has decided not to go before the voters for another term. Or maybe I wasn’t. By time I saw it in the Inquirer, it was a few days late.

Cantil-Sakauye described the reaction from colleagues about news of her departure as “moans and groans and exclamations of concern and dismay and congratulations.”

But just look at what she’s left us. It’s a marvel.  A judicial environment where consensus is enabled in the pursuit of fairness under the rule of law.

Instead of a fragmented court constantly drawn into issues of rancor and division, California’s high court has been collegial and focused on its job. It’s a court that in Cantil-Sakauye’s words is now “solid and sustainable.” And perhaps that is the reason she has set a retirement date of Jan. 1.

Cantil-Sakauye said she’s not going into politics, though she does plan to do something. She’s just not saying now.

Appointed by then Gov. Arnold Schwarzenegger, a Republican, Cantil-Sakauye took her oath in 2011 as the first person of color and the second woman to serve as chief justice of the California Supreme Court.

She definitely, was a first Filipino (a club to which I have a minor membership).

She’s guided the court system as its top administrator through budget cuts to budget surpluses, through Covid shutdowns to ideological stagnation. Once seen as a stodgy conservative bunch, the high court with Cantil-Sakauye at the helm has evolved into an institution shaped by Governor Newsom and his predecessor Jerry Brown, both Democrats. Their appointments of new justices have turned the court into one that reflects the interests of the state’s diverse people.

And now Newsom will have another appointment.

People forget that Cantil-Sakauye was a Republican who worked her way up in her hometown of Sacramento, from a county prosecutor to cabinet positions under Republican Governor George Deukmejian. She was a state appellate judge before her appointment to the state’s high court.

As the chief justice, she garnered national attention in 2017 when she criticized federal agents for arresting immigrants in California’s state courthouses. Cantil-Sakauye saw it as eroding trust in the state courts and called it “stalking.”

Later in Dec. 2018, she left the Republican party after watching the Senate hearings for Judge Brett Kavanaugh and registered as an independent.

So in January she’s out? It’s hard to imagine Cantil-Sakauye is done with public life when she’ll be just 63.

63? Biden and Feinstein think that’s the infancy of a career in elected politics.

But politics would be a natural thing for Cantil-Sakauye, whose inspiring origin story has voter appeal. Consider how her Filipino-Portuguese father, Clarence Cantil, worked the pineapple plantations before coming to California. Her mother, Mary Gorre, a Filipina, was a migrant worker who followed the crops. Cantil-Sakauye grew up humbly and has said publicly that she remembers her mother’s savings guiding her principles about hard work being rewarded and providing the opportunities in the American Dream.

I wonder what would happen if she got an equal dose of Larry Itliong’s speeches.

More dominant were phrases like, “There for the grace of God go you,” and “You listen to everyone because everyone has something to say,” the latter she admits has helped her in her work to this day. And perhaps that explains her conservative, but empathetic nature.

After two years at junior college, Cantil-Sakauye went to UC Davis for her B.A. She also got her law degree from Davis, all while working as a waitress and blackjack dealer in Lake Tahoe.

At age 35, and already moving up the conservative ranks, she was Cantil-Gorre until she married Mark Sakauye, a retired Sacramento police lieutenant. Her hyphenated name merges some major Asian American histories. The Hawaii plantations, the California fields, and her husband’s story, the son of farmworkers who became farmers and then were incarcerated in concentration camps. Cantil-Sakauye told The New York Times that her husband’s grandmother developed breast cancer while in a Colorado camp. After a Japanese doctor performed a double mastectomy, the grandmother died. Cantil-Sakauye said the stories of her in-laws’ struggles made her more of an immigrant rights advocate. Could that be a hint of the future?

Still, to retire as a chief justice and to drop immediately into the fray sounds unlikely.

At least for now, we have four more months to notice her, the Asian American Filipina  chief justice of the Supreme Court in the most Asian American state in the nation.

We were at a pinnacle, and many of you didn’t even know it. But it’s true. The success of others has always been the reminder not of the possibility of the American dream, but  of the Filipino dream.

So let’s appreciate Chief Justice Tani Cantil-Sakauye and the historical nature of it all in the present tense while it lasts.

Or until she’s ready to announce what’s next in her already estimable career.

Emil Guillermo is a journalist and commentator. He writes a column for the Inquirer’s North American Bureau.