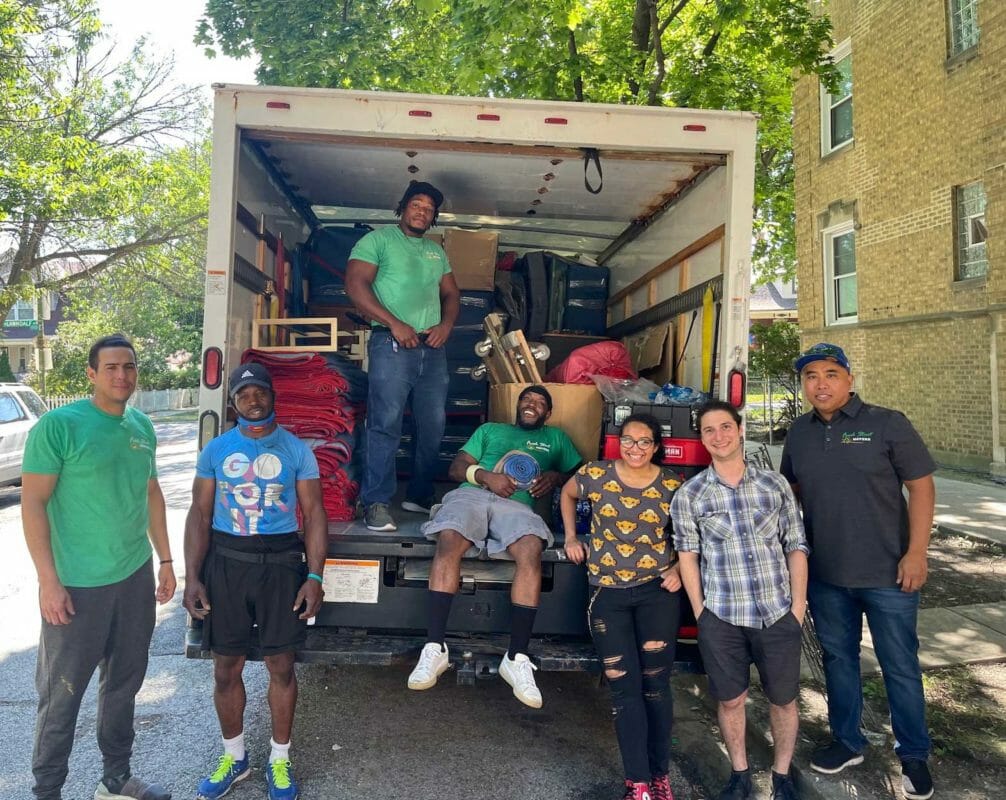 Filipino American Neal Vichiensaen (extreme right), president of Fresh Start Movers, poses with some of his hardworking and loyal workers who serve the Chicago Area. They are thankful to Neal for giving them an opportunity to work to be able to rebuild their lives. (Photo: David Santos)

CHICAGO – “Everyone deserves a second chance in life,” said first generation Filipino-Thai Neal Vichiensaen, 42, president of Fresh Start Movers, a moving company. “I believe that you do have to help your community,” he said.
Vichiensaen employs former incarcerated individuals looking to integrate back into society. He wants to address the problem of recidivism, or the tendency for an individual to be re-incarcerated.

Recidivism is not only a societal failure, but an economic one as well, costing Illinois $13 billion over a 5 year span alone.

Fresh Start Movers provides opportunities and utilizes the specific skill sets of these individuals to help keep them from re-entering the penal system.
Before Fresh Start, Vichiensaon’s love of math led him to the trading floor at the Chicago Mercantile Exchange. There, he led the agricultural team by trading options and specialized in derivative instruments of different equities and interest rates. He later opened several trading firms with several colleagues. He considered himself a market maker.
Vichiensaon also had to persevere in an environment where very few people looked like him. The trading floor was often hostile, chaotic, and unfortunately, sometimes, racist.

He acknowledges that not many people may have been able to endure the abusive nature of trading, but he was focused, motivated, and thick-skinned.

After 15 years, Vichiensaon decided to leave trading. “My colleagues and I realized that our careers were not going to last forever.” He saw the role that technology was playing in the industry, and decided it was to time leave.
Around this time his sister and brother-in-law opened LifeHouse Group in Chicago, an idea that was inspired by The Outside Academy in Utah.

LifeHouse Group is a halfway house on the southside of Chicago that assists roughly 140 incarcerated men to transition back into society by providing job training and free housing for 90 days.
This provided inspiration for the start of Vichiensaon’s new journey. He opened Fresh Start Movers, along with his business partner Jason Mrozik in 2020.

He recruits workers from LifeHouse Group for his moving company in addition to non-incarcerated professional movers. “There was an opportunity that arose in my eyes. I saw what you could do for these guys. We provided a chance to help them get back on their feet,” he said.
His company’s motto: “We move more than boxes, we move lives.”

Former incarcerated employees who no longer work for thank him for giving the the opportunity to work save up, be responsible, go on with their lives.

One employee, David Starks, who now off parole and has been with Fresh Start Movers for a year, is now financially independent.
“Ninety percent of the formerly incarcerated individuals went on to lead successful lives,” he said. What surprised him the most was the positive feedback and support given to him by the general public. He was originally skeptical about the business model of using formerly incarcerated individuals as movers, but admitted that he was proved wrong. “In a way, it was a renewed sense of faith”.

Neal’s value system was heavily shaped by family and education. Vichiensaon’s mother, Nilda Dumapit, a retired dialysis technician from Negros Occidental, and father, Sompap, a Buddhist engineer from Thailand who passed away in 2016, both emphasized the importance of education.

This led Vichiensaon to pursue his love of math and numbers at Loyola Academy in Wilmette, Illinois and eventually Loyola University in Chicago. There, he learned the importance of giving back while also adopting the school’s ethos of “men and women for others.”

Both schools’ principals were founded on service work and, in college, Vichiensaon was a member of the fraternity Alpha Phi Omega, which required a minimum of 20 hours of community service.

It could be said that these paths have led Vichiensaon to his present endeavor in life. Looking back, he is humbled and grateful for the opportunities afforded to him by his parents.

Vichiensaon’s advice for future entrepreneurs: “Don’t quit. Have a map where you write everything down. Have your destination. Know where you want to be in 6 months.” But most importantly, “in order to give back, make sure to leave time for yourself and those you care for.