Trump should share the heat with the Walis Tambo Man

Trump should share the heat with the Walis Tambo Man 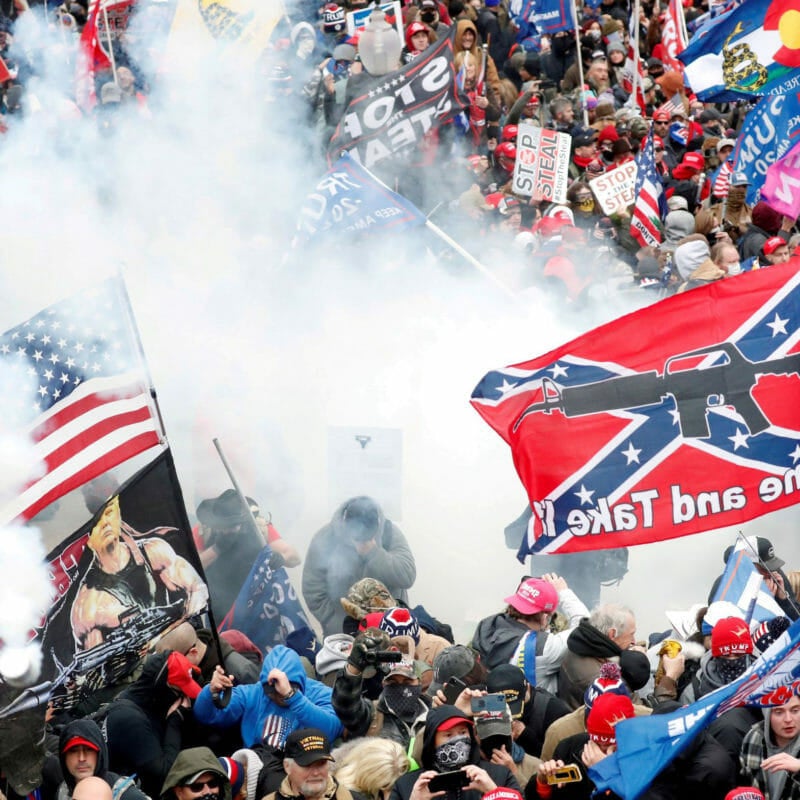 Tear gas is released into a crowd of protesters, with one wielding a Confederate battle flag that reads “Come and Take It,” during clashes with Capitol police at a rally to contest the certification of the 2020 U.S. presidential election results by the U.S. Congress, at the U.S. Capitol Building in Washington, U.S, January 6, 2021. REUTERS/Shannon Stapleton/File Photo

When it comes to Jan. 6, I’m thinking of all of us. Especially Asian American Filipinos like Kene Lazo of Norfolk. mOn that day, he carried a boi-boi, or “Walis Tambo” into the rotunda to, in his own insurrectionist way, sweep out Washington.

Lazo pleaded guilty last March, as did more than 320 people of the nearly 900 people charged in connection to the riot. But why is Lazo alone on the hook? Shouldn’t the man who led him there be also?

When it comes to Jan. 6, I also think of the kids of Michael Fanone. He’s the DC Metropolitan Police Department Officer who’s become somewhat famous for defending democracy. As he was brutally attacked at the Capitol, his plea for mercy was a simple one.

And he does. Three of his four kids are Chinese American. When he defended democracy, he was defending diversity. Kill him? He had to care for his Asian American kids.

I think of them, as well as all members of Congress, including Chinese American Grace Meng and Vietnamese American Stephanie Murphy, forced to seek secure shelter on Jan. 6. And I think of New Jersey’s Korean American Andy Kim, famously depicted in the Wall Street Journal sweeping up the debris in the Capitol when the drama had all ended.

But it’s mostly Fanone’s three Chinese American girls I think about. They nearly lost their police officer father who was dragged, beaten, and tasered all while he was having a heart attack.

He lived, but other lives were lost that day. And someone could have stopped it all. The former President of the United States.

Voyeur, not a leader

Last week, the Jan. 6. Select Committee gave us the details of what President Trump was doing while the Capitol was under siege. Nothing.

Trump was like the arsonist admiring his reflection in the fire he set. He told people to come to the Capitol and indeed, they came.

High level White House aides and true-blue Republicans like White House counsel Pat Cipollone, once again testified under oath that Trump was watching it all unfold on television for 187 minutes.

That number will forever be associated with our democracy — 187 minutes, the threshold for almost losing what we gained in 1776.

Fans of antiquity will instantly turn to Nero, who is said to have fiddled as Rome burned in the summer of 64 CE (AD).

Trump was fiddling too. But not with calls to the National Guard or to others who could quell the crowd. Trump called senators to help him continue to thwart the certification vote scheduled for that day, as well as his main henchman, Rudy Giuliani.

But he also watched Fox News and liked what he saw, especially when the mob provided the lyrics to the mayhem of his making. Who can forget the memorable “Hang Mike Pence”? They may as well have been saying all our names.

There was another chant in the crowd too, which Trump may have seen reported. “Kill him with his own gun!” That was what people were saying of Officer Fanone as he was punched and kicked and dragged face-down some Capitol steps.

Fanone testified last year at this time to the committee and could be seen in the crowd last week. He knows what it was like that day. And why he brought up his Asian American kids.

On the morning of Jan. 6, 2021, Mike Fanone woke up early, as usual, and went to the gym. He’d been living with his mom since a breakup left him with an apartment he couldn’t afford, working a second job at a security consultancy, saving for a down payment on a house for him and the girls—Piper, 9; Mei-Mei, 7; and Hensley, 5.

That his kids are multiracial is significant. Fanone’s kids are the democracy we’re all fighting for, the new America.

America is changing. Whites are still the largest group at 204.3 million, but that number has decreased 8.6 percent since 2010.

That fact has led to a growing resentment among on the Right. And Jan. 6, despite the boi boi guy, was really an expression of White Rage.

Ziegler said he invoked his right to remain silent through the Fifth Amendment or executive privilege in most of his answers before the committee.

But he did not stay silent on social media. Online, Ziegler called the committee an “anti-white campaign, and if you can’t see that your eyes are freaking closed.”

Ziegler said he was the “least racist person that many of you have ever met. By the way, I have no bigotry. I just try to see the world for where it is.” That’s what they all say.

But this is our polarized America now. And while Ziegler chooses to dig in and insist he is not a racist, we have seen other rioters repentant for what they’ve done.

Rioter Stephen Ayres testified to the committee  last week and then tried to apologize to Fanone.

Fanone was asked about the apology and told CNN (where he now works as an analyst) he was caught off guard and didn’t remember Ayres’ exact words. But he said apologies are deeply personal and private moments.

“Save the apologies,” Fanone said. “And that goes for anyone involved in Jan. 6.”

“The way [the apology] was carried out I found disingenuous, and you know, in regards to January 6, I’m sorry, I am not anyone’s rest stop on the road to redemption.”

His phrasing stopped me cold.

In 2012, I interviewed by phone Vincent Chin’s killer, and Ronald Ebens apologized. I heard it. But it wasn’t up to me to either accept it or to judge him. I was an opinion journalist. If anything, I wanted to know why Ebens has continued to avoid the judgment against him that he owes to the Chin estate.

I wish I had Fanone’s line to respond to Ebens’ apology. “I am not anyone’s rest stop on the road to redemption.”

I imagine many more will want to apologize for their actions on Jan. 6, perhaps sooner than later. But apparently not Ziegler, or his former boss, Trump.

Trump continues to campaign for his clone election deniers like former Arizona TV anchor Kari Lake. And just last week he made calls to a Wisconsin official to reverse the decertification of the 2020 vote. That’s how unwilling Trump is to accept defeat, to him his loss is more important than our country’s loss of democracy.

And that’s where the alarm bells should go off. Yes, politicians are self-serving bastards for the most part. But to do it like Trump goes beyond the norm.

American Filipino Republican lawyer and commentator George Conway called Thursday’s hearing “a devastating portrait, not just of dereliction, but depravity by the president, and derangement.

That makes Trump at the very least a triple D.

Cheney: The strongest case  Trump is from his own people

That’s why, no matter where you are in the political spectrum, you have to like Jan. 6 committee co-chair Liz Cheney’s closing last week. The hearings are no witch hunt. Cheney called it “a series of confessions” by Donald Trump’s own appointees, friends, campaign officials, and even his own family.

“They have come forward and they have told the American people the truth.”

And then Cheney played a public comment of Steve Bannon, the Trump aide who was found guilty in contempt of Congress last week and faces jail time for ignoring a subpoena to testify. Bannon described how it was Trump strategy to “declare victory,” claim the election was stolen (without evidence), and do some “crazy sh-t.”

And all because Trump knew he could convince millions of supporters to do his bidding.

That is a crime. Yet only Trump’s followers who rioted like Stephen Ayres and Kene Lazo have been charged. Why not Trump, the man who incited the riot?

“Donald Trump made a purposeful choice to violate his oath of office, to ignore the ongoing violence against law enforcement, to threaten our constitutional order,” Cheney said. “There is no way to excuse that behavior. It was indefensible. And every American must consider this: Can a president who was willing to make the choices Donald Trump made during the violence of January 6 ever be trusted with any position of authority in our great nation again?”

The answer is always a resounding, “NO,” if America is to remain a strong and vital democracy.

Cheney, who faces a primary challenge from an election denier in Wyoming and is likely to lose, doesn’t seem to care about her own political ambition. She cares about our country.

On Sunday she told Jake Tapper on CNN, something that is tantamount to a functional oath of really putting America first.

“If I had to choose between maintaining a seat in the House of Representatives, or protecting the Constitutional Republic, and ensuring the American people know the truth about Donald Trump,“ Cheney said, “I’m going to choose the Constitution and the truth every single day.”

Donald Trump would never say that. He’s all Trump first, America last, which makes him unfit for any office, let alone the presidency of the United States.