Jake Lamb drove in the go-ahead run with a seventh-inning double, while Gavin Lux and Trayce Thompson each drove in two runs as the Los Angeles Dodgers finished off a four-game sweep of the visiting San Francisco Giants with a 7-4 victory Sunday.

Lamb, Lux, and Thompson each drove in runs in the seventh inning against Giants right-hander Tyler Rogers to break a 4-4 tie. The Dodgers increased their winning streak to a season-high eight games despite getting just 4 1/3 innings from All-Star left-hander Clayton Kershaw.

Darin Ruf hit a two-run home run and Thairo Estrada drove in two runs for the Giants, who fell to 0-6 at Dodger Stadium this season. San Francisco had gone into the All-Star break winning five of six games. 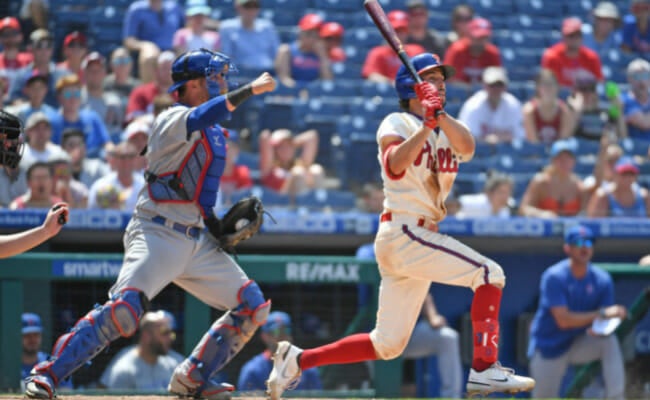 Christopher Morel had a double, single, and an RBI for the Cubs, who swept the series and won their fourth in a row. Cubs starter Drew Smyly gave up two runs (one earned) on four hits over six innings. Smyly (3-5) struck out four and did not allow a walk.

David Robertson allowed two baserunners in the ninth inning but struck out Garrett Stubbs to end the game for his 14th save. 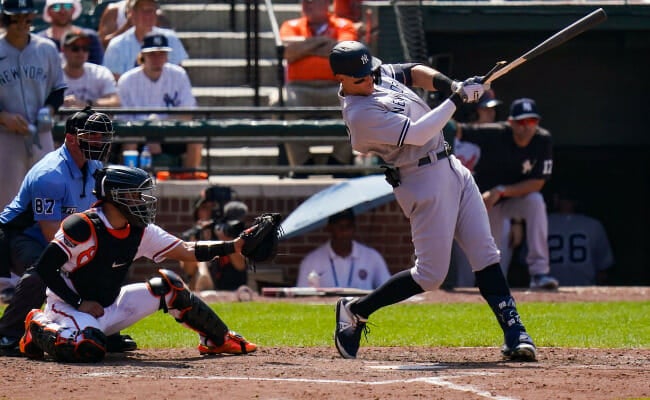 The judge went 2-for-4 with two RBIs, two runs, and a walk for the Yankees, who took two of the three games from the upstart Orioles. Baltimore has dropped four of its past six games.

After DJ LeMahieu gave the Yankees a 1-0 lead with an RBI double that scored Trevino with two outs in the third, Judge blasted Dean Kremer’s curveball 456 feet over the left-field fence to extend the advantage to 3-0. 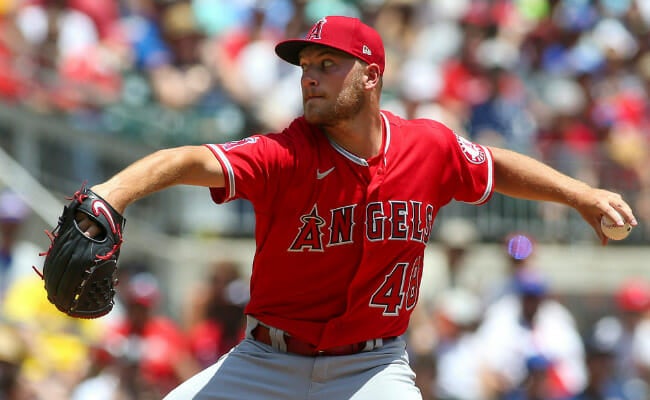 Detmers (3-3) was able to effectively change speed and location to quiet an Atlanta offense that had scored 15 runs in the previous two games of the series. The left-hander allowed three hits and two walks and struck out six in his first career appearance against the Braves.

Los Angeles had 13 hits Sunday. Taylor Ward and Max Stassi each had three, and Luis Rengifo and Jo Adell each added two. Stassi had a double, a triple, and three RBIs. The losing pitcher was Ian Anderson (8-6), who was knocked out after pitching three-plus innings. He allowed seven runs on eight hits, walking three and striking out two.

Luis Guillorme and Tomas Nido contributed RBI hits in the inning and Alonso added an RBI double in the seventh as the Mets avoided getting swept in the three-game series. They also increased their lead in the NL East to 1 1/2 games over the Atlanta Braves.

Padres starter Joe Musgrove (8-3) pitched out of a major jam in the fifth inning but didn’t survive the sixth. Starling Marte singled and Francisco Lindor doubled, putting runners at second and third with no outs for the second straight inning. But while Musgrove got three groundouts to end the fifth unscathed, he surrendered the 425-foot no-doubter to Alonso one frame later.

Tapia finished the series with 10 RBIs in just two games. He had six RBIs in Toronto’s 28-5 win in the series opener on Friday and didn’t play Saturday. Vladimir Guerrero Jr. added four hits and an RBI on Sunday.

Toronto scored five runs in the first. The rally started with an infield single by George Springer and an infield double from Guerrero that bounced off the bag at third. Bo Bichette walked to load the bases and Cavan Biggio hit a two-run single with two outs. Matt Chapman walked, and Tapia hit a three-run triple to right-center.

Run-scoring singles by Nick Fortes and Miguel Rojas in the 10th inning gave visiting Miami a win over Pittsburgh to take two of three in a weekend series.

Pinch runner Luke Williams opened at second in the 10th. Fortes singled to right against David Bednar (3-4), driving in Williams, and went to second on Cal Mitchell’s fielding error. Fortes went to third on Joey Wendle’s groundout and scored on Rojas’ single to left.

Mitchell’s RBI single in the bottom of the 10th against Jeff Brigham (first save) produced the final score. Bryan De La Cruz homered and hit an RBI single, and Jesus Aguilar hit a two-run single for the Marlins.

Joey Votto connected on a three-run homer and Tyler Mahle returned from the injured list with six solid innings as Cincinnati beat visiting St. Louis to earn its second win of a three-game weekend series.

Reiver Sanmartin and Alexis Diaz each pitched a scoreless inning of relief before Hunter Strickland pitched a perfect ninth for his fifth save in seven chances.

The Cardinals’ Paul Goldschmidt continued his tear against Reds pitching, hitting two home runs off Mahle to give him five homers in his last four games — all against Cincinnati — after a 17-game homerless drought.

Sonny Gray struck out seven batters and allowed one run in six innings to help lead Minnesota to a road win over Detroit.

Jose Miranda went 3-for-4 with two RBIs and two runs scored to lead the offense for the Twins, who swept the brief two-game series between the teams. Gray (5-3) walked one and threw 84 pitches, 55 for strikes.

Eric Haase had two of Detroit’s three hits and drove in the Tigers’ lone run. Tigers shortstop Javier Baez left the game with a left arm contusion after being hit by a pitch from Gray in the fourth inning.

Leody Taveras joined Garcia and Heim with at least three hits, notching a double and two singles as part of the Rangers’ 16-hit assault on A’s All-Star Paul Blackburn (6-6) and two relievers. Perez limited Oakland to one run and four hits, walking three and striking out six.

The Athletics made the final score respectable by scoring seven runs in the last two innings. A four-run eighth featured a two-run double by Chad Pinder and a two-run homer by Stephen Piscotty. Sean Murphy, Pinder, and Tony Kemp launched consecutive solo shots in a three-run ninth.

Bubic (2-6) surrendered two runs on four hits, struck out four, and walked three in winning for the first time since June 20 on the road against the Los Angeles Angels. In the seventh inning, Dozier singled in Whit Merrifield off Brooks Raley (1-1) to break a 2-2 tie.

MJ Melendez added an RBI double in the eighth as the Royals had 14 hits to claim their second straight victory. Bobby Witt Jr. had a first-inning RBI single and stolen base but left the game with a tight right hamstring.

Keibert Ruiz went 3-for-3 and drove in the winning run with a single in the eighth inning as Washington rallied for a victory over Arizona in Phoenix.

With the game tied 3-3 in the top of the eighth, Lane Thomas led off with a double to left-center off All-Star reliever Joe Mantiply (1-3). Luis Garcia then sacrificed Thomas to third and Ruiz followed with a single to right to give Washington its only lead of the game.

Ruiz also had a walk and scored a run, and Yadiel Hernandez had two hits and a run for Washington, which won for just the third time in its last 20 games and also avoided its first-ever series sweep at Chase Field.

Leury Garcia and AJ Pollock homered in the second inning off Bieber (4-6), who had allowed three homers in his previous 10 starts and seven overall. Eloy Jimenez also connected in the sixth inning for the White Sox, who earned a split of the four-game series.

Andrew McCutchen capped an eighth-inning rally with a two-run double and Milwaukee held on for a wild comeback victory over visiting Colorado.

Milwaukee began its three-run rally off Alex Colome (2-3) when Christian Yelich drew a two-out walk. Willy Adames and Rowdy Tellez followed with singles to tie it 8-8. McCutchen then lined a 3-2 pitch over the head of centerfielder Yonathan Daza.

Colorado got a run in the ninth off closer Josh Hader when Garrett Hampson tripled with two outs and Daza singled him home. Hader got Kris Byrant on a comebacker to the mound for his 28th save in 30 chances.

Jose Altuve and Jeremy Pena cracked back-to-back homers to start the game and Framber Valdez pitched shutout ball into the seventh as Houston defeated host Seattle to polish off a three-game sweep.

Martin Maldonado added three RBIs for Houston, which got another solid outing from Valdez (9-4). He scattered eight hits over 6 2/3 innings, allowing three runs and a walk while fanning eight in his 16th straight quality start.

Abraham Toro belted a two-run homer in the eighth that pulled the Mariners within three runs, but Ryan Pressly locked it down in the ninth for his 20th save. The 1-2-3 inning gave him 30 straight hitters retired, a franchise record.