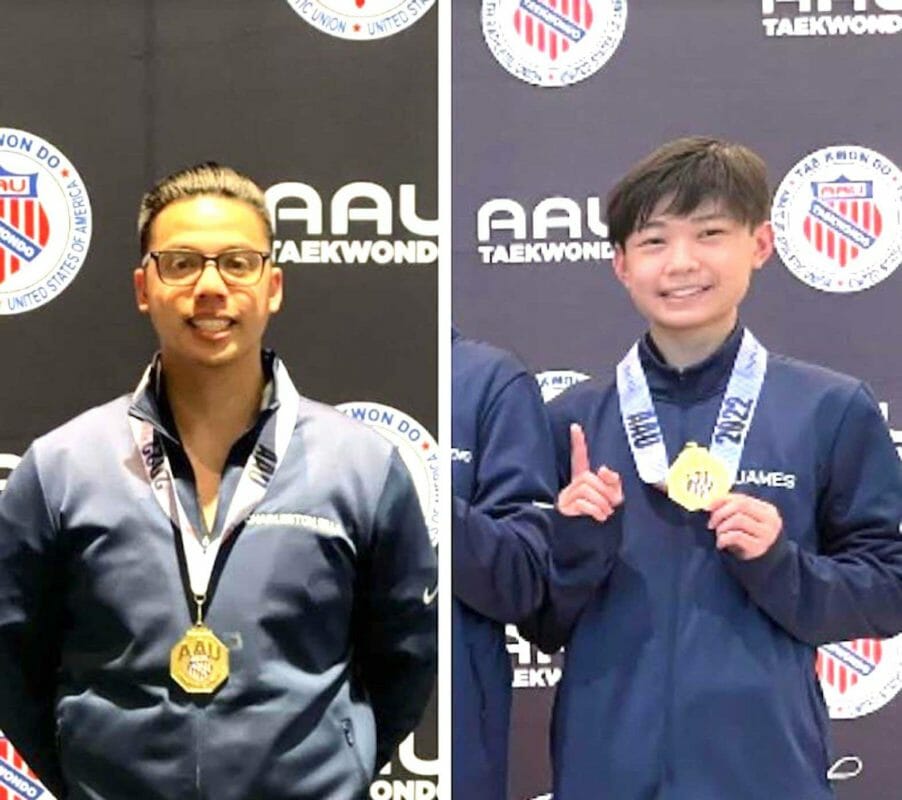 AAU — or Amateur Athletic Union — is a multisport organization that promotes amateur sports and physical fitness programs. It was founded in 1888 and has 700,000 members in the U.S. It has 34 sports programs, including beach volleyball, soccer and wrestling.

Gold medal winners Santos and Silla teach at Champions Martial Arts (CMA) in Forest Hills. Silla is the head Taekwondo instructor at the school, and Santos is a staff member. Much of their work ethic comes from the principles of the discipline and from their coaches Master Oh and Master Lee.

Master Oh posts inspirational quotes on their Facebook pages that serve to inspire them. One such quote is from the late Kobe Bryant who stated: “Show up every single day and do the work.”

Santos began taking Taekwondo lessons at the age of four and is now in the process of earning his 3rd Degree Black Belt. His competitions started at the local level in New York and New Jersey. He is also part of the Poomsae Team, which is also known as the forms part of Taekwondo. He won his second gold medal in his team competition, earning him a coveted spot as a member of the 2023 AAU National Team.

Santos is 16 years old, the son of a Filipino father, Don, and a Korean American mother, Sandie. His paternal grandmother worked in the United Nations as a secretary. His Filipino ancestry, on his grandfather’s side, is associated with the Lorenzana Food brand known for its dips, gravy and fish sauce. His grandparents emigrated to the United States in the ‘60s, and are now retired. He attends the Bronx High School of Science.

Silla, 23, was born and raised in Queens. His parents, Charlie and Annalynn, came from the Philippines to the U.S. in 1991 where they launched their nursing careers. Silla began to study Taekwondo  at age of 5, inspired by his older brother, Charles. Silla  also sought inspiration from his favorite martial arts actors such as Bruce Lee, Jackie Chan, and Jet Li.

Silla has actively been training for 18 years and has a 4th Degree Black Belt. He currently trains with Master Oh at Bayside CMA and teaches in his school, Champions Martial Arts Forest Hills. His dream of becoming a Taekwondo master and opening his own school has turned into reality. @TheFilam