Voices of a Fil-Am movement in ‘A Time to Rise’

Voices of a Fil-Am movement in ‘A Time to Rise’ 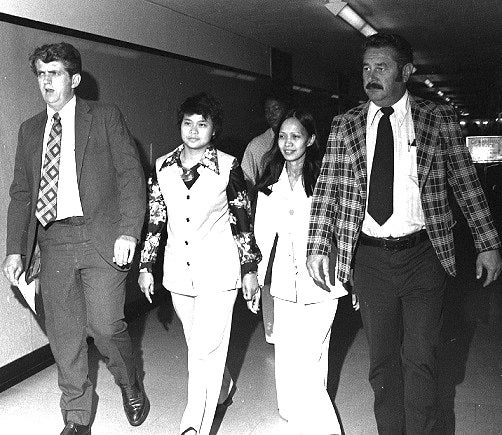 From our first wave of immigrants, the manongs of the 1920s and ’30s, who risked their jobs and safety fighting exploitative labor conditions on West Coast farms, Filipinos have been politically active in the U.S. Yet the dominant image of the passively assimilated Filipino prevails. A Time to Rise: Collective Memoirs of the Union of Democratic Filipinos (KDP) (University of Washington Press) meticulously shatters this stereotype with detailed accounts of 42 KDP activists, 27 of them women, who from 1972 to 1986, dedicated their lives to supporting a nationwide movement.

Founded in Santa Cruz, California in 1973, the KDP succeeded in its mission, not only to inform the public about civil rights violations in the U.S. and the Philippines, but also to mobilize hundreds of activists to confront injustice and effect change. For anyone looking to engage in the issues they believe in or find inspiration amid today’s discouraging headlines, the lessons shared by former KDP members in A Time to Rise are deeply impactful. 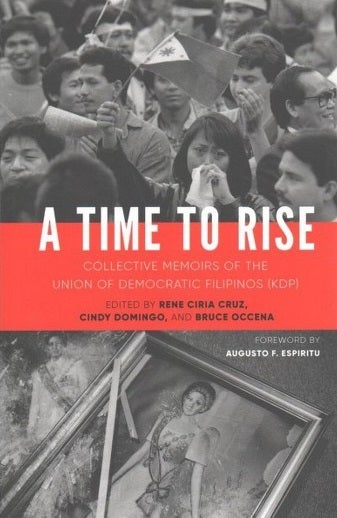 A Time to Rise: Collective Memoirs of the Union of Democratic Filipinos (KDP) is published by the University of Washington Press.

“In these narratives, instead of ideological debates, we see the inside of a movement, the emotional and deeply felt experiences of a group of young people dealing with difficult situations, some involving great personal risk, others requiring courage to challenge the status quo or disrupt the familiar,” says Augusto F. Espiritu, associate professor of history and Asian American studies at the University of Illinois, who wrote the foreword of the book.

The KDP didn’t have the benefit of social media to bring mistreatment and prejudice against Filipinos to light. Nevertheless, the group’s network, which had offices from Seattle and Oakland to New York and Philadelphia, found and confronted unfair working and living conditions that would have remained unquestioned and forgotten. Detailed and informative, the memoirs in A Time to Rise hash out the struggles that made the difficult road to justice possible.

For instance, Esther Hipol Simpson describes her work helping two Filipina nurses, Filipina Narciso and Leonora Perez, who were accused of murdering 35 patients in an Ann Arbor, Michigan, hospital in 1975.

“It was clear that the hospital administration and FBI were zeroing in on the two nurses because they were immigrants who, like most new immigrants, weren’t aware of their rights,” Simpson says.

The KDP investigated with the nurses’ legal team, distributed leaflets to educate people on the nurses’ plight, and coordinated demonstrations in front of federal buildings in several major cities.

FEATURED STORIES
LeadAdvisors Reviews and Ratings
The Power of Links: How Many Does it Take to Get Ranked on Google?
Best Crystals for Protection Against Negative Energy

“This was the first time in Filipino American history that the community held an orchestrated nationwide protest against a domestic injustice,” Simpson says. In 1977, the nurses were freed when a federal judge ordered a new trial due to prosecutorial misconduct, and the prosecutor never retried the case.

Another example of KDP work takes place in the early 1980s, when the group coordinated with civil liberties organizations, churches, labor unions, and senators to stop the passage of a U.S. bill that would have allowed Marcos to extradite Filipinos with unproven criminal activity.

“Our hard work paid off,” says Odette Polinta, who was a KDP member based in Washington, D.C. “In spite of the Reagan administration’s strong support for the treaty, we successfully blocked the Marcos government’s attempt to extend its repressive tentacles in the United States.” 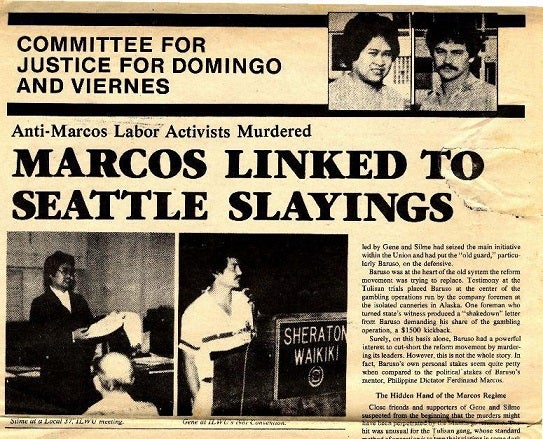 The 1981 murder of union leaders Silme Domingo and Gene Viernes led to the conviction of a hit man working for dictator Ferdinand Marcos. UW DIGITAL ARCHIVES

The most significant victories are those that reappear throughout the book. Editors Rene Ciria Cruz, Cindy Domingo, and Bruce Occena successfully arranged the narratives of A Time to Rise in an arc, revealing why members chose to join, the day-to-day work of activism, and the legacy their work left behind. As with every story, common threads begin to overlap and familiar characters reappear, cluing in the reader as to the struggle’s most significant moments.

For the KDP, the murder of beloved Seattle activists Gene Viernes and Silme Domingo by Marcos operatives in 1981 was a gut-wrenching blow. Ten years and three criminal trials later, the KDP succeeded in bringing the hit men and Marcos collaborator, Tony Baruso, to justice with criminal convictions, and winning $23.3 million in damages from the Marcoses’ estate for the Viernes and Domingo families in a U.S. federal civil suit.

More than a list of achievements, A Time to Rise is personal. It’s about mothers who formed collectives in which to raise their children while working full-time jobs before their nightly KDP discussion groups. It’s about different classes and generations bonding over a common cause. It’s about sacrifice; KDP members regularly gave up homes and careers to fulfill KDP duties in another state. It’s about being conflicted, when the demands of activism began to take their toll on personal wellbeing and relationships.

Estella Habal sums up her KDP work nicely: “Activists and revolutionaries seemed to be at the forefront of everything in those days. If you were a woman like myself, we did it all and then some. We had our children, divorced the men we didn’t love, organized childcare for our kids, all the while fighting hard to win battles we passionately believed in. My individual energy and power were doubled, quadrupled by the social movement of the times and an organization like the KDP.”

Renee Macalino Rutledge is an author, a journalist, and book editor based in the San Francisco Bay Area. Her first novel, The Hour of Daydreams, was released last year to critical acclaim.

A Time to Rise: Collective Memoirs of the Union of Democratic Filipinos (KDP) is available in Amazon.com.

MOST READ
usa Man in hate crime attack on elderly Filipina in NY gets 17.5 years in prison
usa Quebec coroners refuse to reopen case of Filipina, 86, found dead on hospital floor
usa 10 Signs Your Partner Is Emotionally Unavailable
usa Tenuto 2: The Only Male Vibrator Designed For Him With Her In Mind
usa Achievers honored on PH Heritage Night at sold-out Madison Square Garden
usa Best TV Recliners 2022
usa No Contact Rule: The Best Way to Get Over Your Ex
DID YOU KNOW?
25 Best Deals for the Holidays - Gift Guide 2022
Best Crystals for Protection Against Negative Energy
25 Best Holiday Deals: Top Brands to Shop This Holiday Season
Best Barbie Dollhouses 2022
Best Anime Mouse Pad 2022
5 Ways to Hack the Holidays with the Best Cash Back App
4 of the Best Holiday Gifts for Coffee Lovers