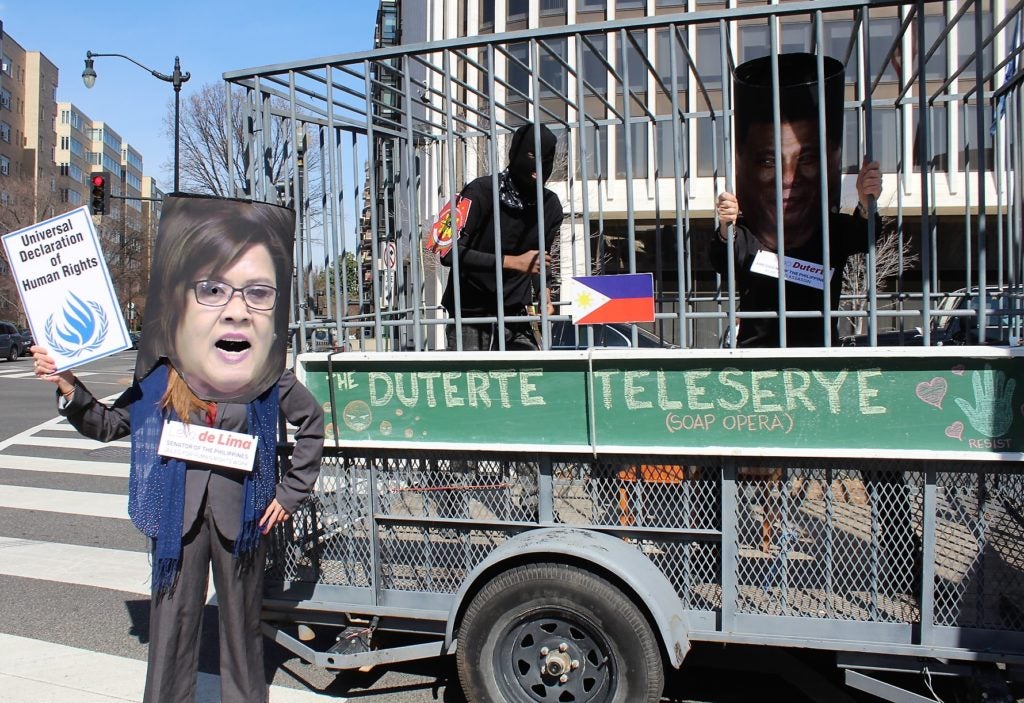 WASHINGTON, DC — A Jeep Wrangler pulls in front of the Philippine Embassy on Massachusetts Avenue, hauling an empty mobile prison cell. Inside the vehicle is President Duterte and two masked men toting automatic weapons. The soundtrack from “Angel of the Morning” fills the air.

Duterte speaks to protesters lined up against the Embassy fence. “Come closer so I can shoot you,” he says. “I’m going to purify this land from drugs.”

The armed men start searching the protesters, quickly turning them to victims. One by one they fall to the ground. Sen. Leila Delima emerges from the crowd and screams: “President Duterte, you are a war criminal. We will investigate you.” Duterte’s men drags Delima and locks her up in the mobile jail. 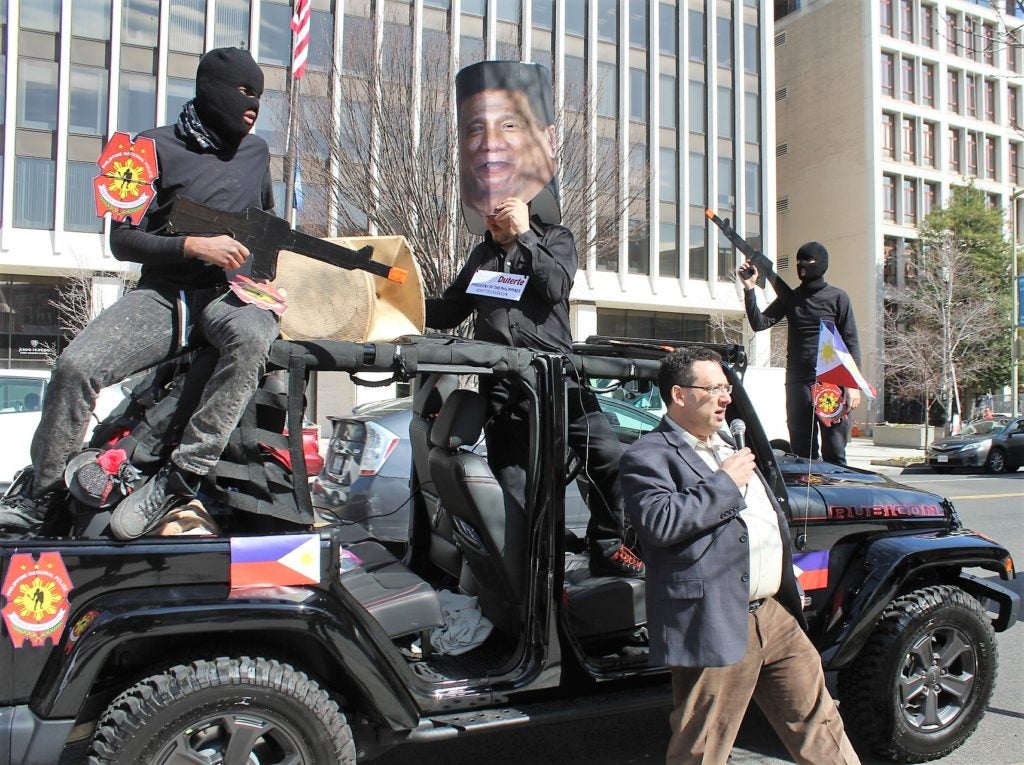 David Gorden of StoptheDrugWar.org explains the theme of “Duterte Teleserye” shortly before actors in a street theater stage a “soap opera.” INQUIRER/Jon Melegrito

The chants grow louder: “There’s blood in their hands. Where do you stand? Stop, stop the killings.” The victims rise and release Sen. DeLima. Next, they seize Duterte and throw him in jail. The crowd cheers.

The tender ballad by country singer Juice Newton punctuates the silence that follows:

“And if we’re victims of the night,

I won’t be blinded by the light…

Just call me angel of the morning, angel

Just touch my cheek before you leave me, darling.” The “Duterte Teleserye” (soap opera) ends. The Jeep Wrangler hauling a mobile prison cell pulls out. But not before security men peering from inside the Embassy could take pictures.

Pedestrians on their way to lunch stopped to watch caricatures of Duterte, De Lima (Duterte’s fiercest critic) and Philippine policemen toting toy rifles. Newton’s romantic ballad was designed to get people talking about this in the Philippines, one of the actors explained, because “this is a major soap opera that the whole world is paying attention to.”

Borden explained further: “We selected the teleserye theme for this theatre piece because there is a pop culture cult of personality around President Duterte and many celebrities are supporting him, and this is all part of helping a lot of people there who are pretending that something other than what is clearly going is going on. What is really going on is a slaughter we are here because it needs to stop.” 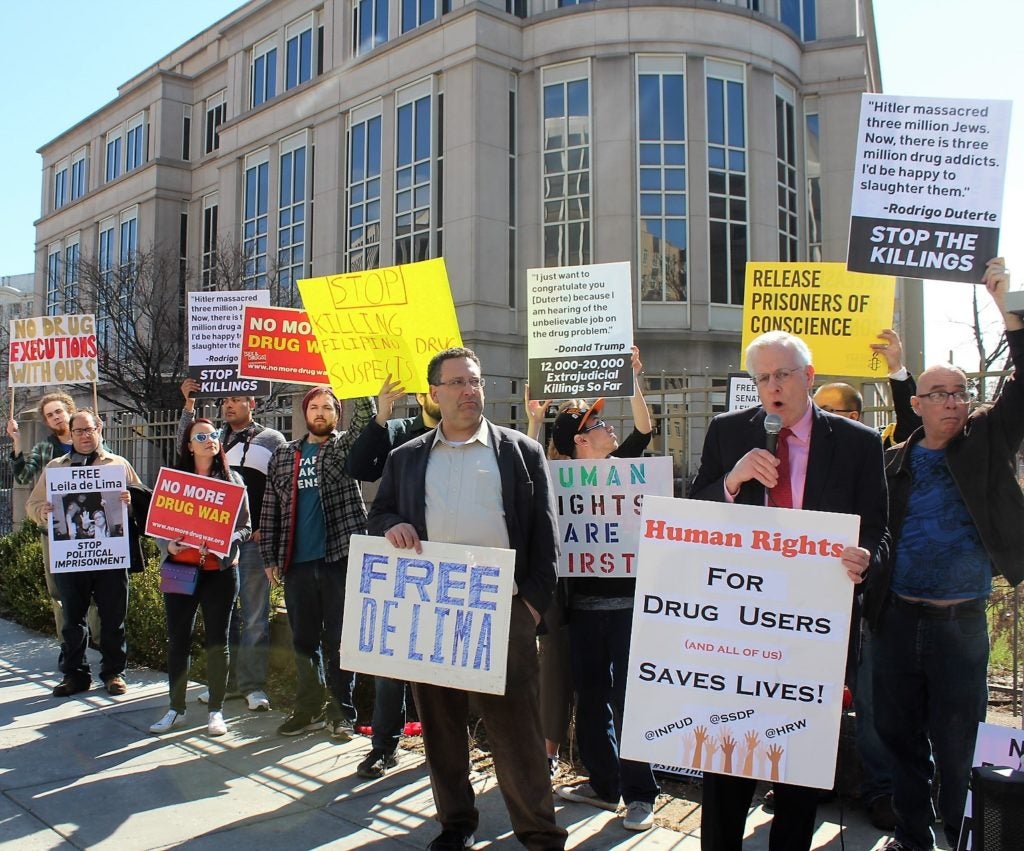 Throughout the hour-long demonstration, protesters waved signs and chanted slogans: “Stop the killings!” “No Justice, No Peace!”

“Currently we are working with Filipino American advocates and others to pass legislation in the US Congress placing human rights conditions on aid to the Philippines, while funding positive alternatives to the drug war there, and to encourage such moves by other donor countries,” Borden said, referring to S.1055, sponsored by U.S. Senator Ben Cardin (D-MD).  “And we are engaged in other work on the issue, including support for the campaign to free Philippine Senator Leila Delima.”

Also speaking at the rally was Sancho Tree of IPS who compared Duterte to autocrats and dictators who “use a mountain of lies” to mobilize a whole population against a small group.

“He ignores a complex, systemic problem and projects all the social ills to this small group of drug users, eliminates them and gets away with it,” he said. “We are here to remember that your lives matter, that no one is expendable.”

Eric E. Sterling, executive director of Criminal Justice Policy Foundation, called out Donald Trump for condoning Duterte’s drug war. “This is a crime against humanity,” he asserted. “We are horrified that Trump thinks this is an appropriate response to the tragedy of substance abuse. Trump shames every American.”

Sterling, who used to work as a counsel in the House Judiciary Committee, adds that the U.S. Congress “has not taken a principled stand on the human rights situation in the Philippines.”

This is due, he points out, to national security problems affecting both the U.S. and the Philippines, which Duterte is using as a pretext to attack drug users.

In her remarks, Maurese Oteyza Owens of USPGG used the occasion of EDSA’s 32nd anniversary to condemn Duterte’s “blatant disregard” of the Philippine Constitution and the crackdown on press freedom. “Enough is enough,” she declared. “We must resist and unite against tyranny and dictatorship.”

Jo Quiambao of Gabriela, D.C., reminded protesters that Duterte has already exceeded the total number killed during the Marcos presidency.

“Duterte’s regime has killed over 14,000 people, displaced over 400,000 with the imposition of Martial Law in Mindanao, and has been perpetuating violence and brutal killings on peasant leaders, labor activists, indigenous peoples. Even priests, ministers and other human rights defenders,” Quiambao said.

The demonstration was live-streamed on Stopthedrugwar.org’s Facebook page. “The video appears to have gone viral and is popular in the Metro Manila area — which is impressive given that it’s only now 6:30 in the morning there,” a member of the organization noted. 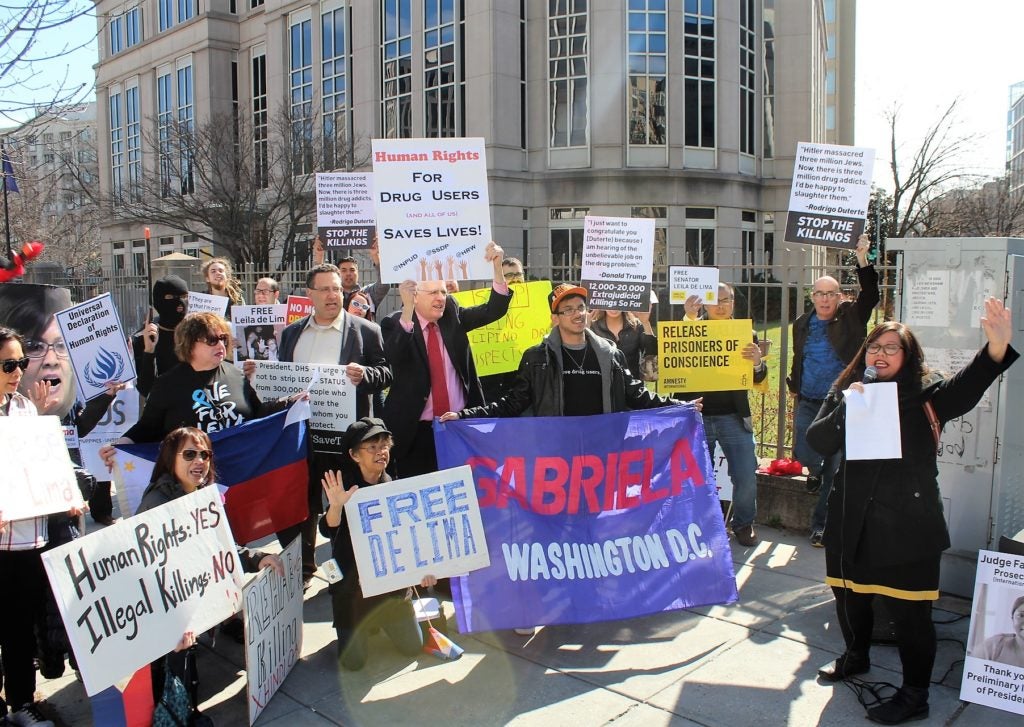 Jo Quiambao of Gabriela leads chants during the hour-long demonstration outside the Philippine Embassy. INQUIRER/Jon Melegrito

“But the number of views is over 42,500, and still growing fast. Not everyone was pleased with the demo, however. A virtual troll army of Duterte supporters descended on our Facebook page, to denounce it.”

“The top priority of the Philippine Government is improving the lives of all Filipinos. Human rights and rule of law are not only integrated into, but more important, serve as the underpinnings of the Government policies and programs. This will be validated by independent and objective assessments of its performance in restoring law and order, eliminating corruption and strengthening public institutions, and ensuring economic growth for the benefit of all.”

There haven’t been EDSA commemorations at the Philippine Embassy since Duterte became president. In prior years, the embassy always marked the anniversary of the People Power Revolution, which toppled the Marcos dictatorship, with cultural and educational programs.

“It’s not something Duterte wants us to remember, I suppose,” Oteyza-Owens mused.