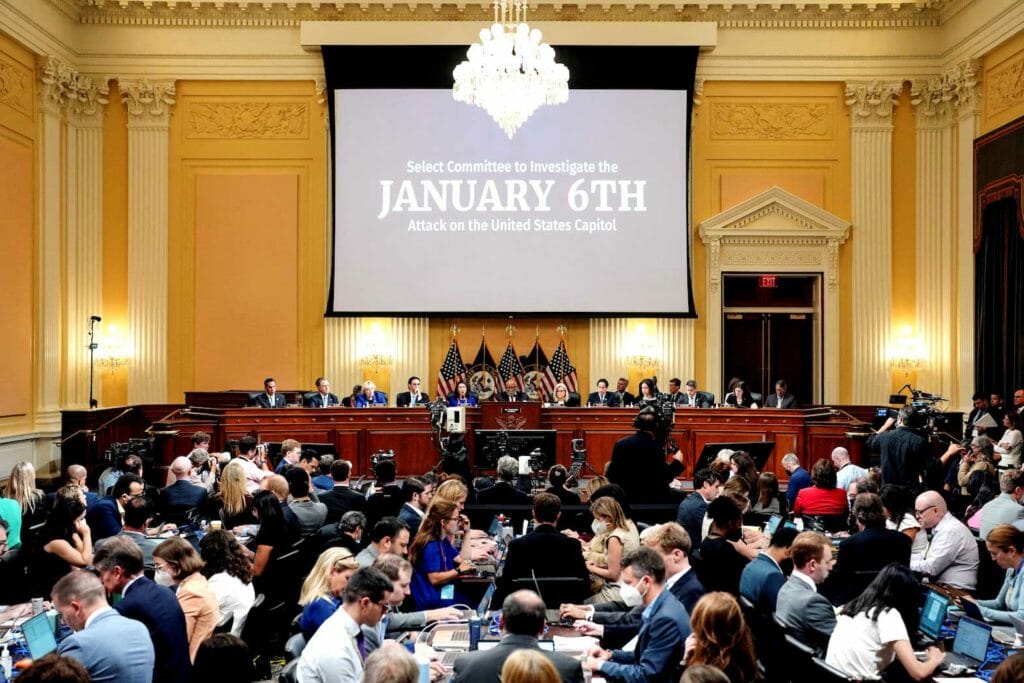 Committee Chairman Bennie Thompson (D-MS) and Vice Chair Liz Cheney (R-WY) sit next to other committee members as they lead the seventh public hearing by the House Select Committee to investigate the January 6th attack on the US Capitol, in Washington, DC, U.S., July 12, 2022. Doug Mills/Pool via REUTERS

WASHINGTON – U.S. lawmakers on Tuesday accused Donald Trump of inciting a mob of followers to attack the U.S. Capitol on Jan. 6, 2021, in a last-ditch bid to remain in power fueled by a chaotic meeting with some of his most ardent supporters.

The House of Representatives committee also produced evidence that aides and outside agitators knew before the riot that Trump would urge thousands of his supporters to march on the Capitol that day.

The panel’s seven Democrats and two Republicans have used the hearings to build a case that Trump’s efforts to overturn his defeat in the 2020 election constitute illegal conduct, far beyond normal politics.

As the three-hour hearing ended, Republican Representative Liz Cheney said Trump had tried to phone a potential committee witness, raising the possibility he might have illegally tried to influence witness testimony.

In video testimony shown during the hearing, witnesses described a loud late-night six-hour meeting on Dec. 18, 2020, where Trump disregarded White House staffers who urged him to concede the November 2020 election to Democrat Joe Biden.

Instead, Trump sided with outside advisers who urged him to keep pressing his baseless claims of election fraud.

Committee members said Trump ultimately was responsible for the chaos that followed.

“President Trump is a 76-year-old man. He is not an impressionable child. … He is responsible for his own actions and his own choices,” said Cheney, the committee vice chairperson.

Committee members said Trump incited the riot through his refusal to admit he lost the election and through comments like his Dec. 19, 2020, Twitter post, shortly after the meeting, for supporters to flock to Washington for a “big protest,” saying, “Be there, will be wild.”

Trump, a Republican who has hinted he will seek the White House again in 2024, denies wrongdoing and has falsely asserted that he lost only because of widespread fraud that benefited Biden, a Democrat.

The committee played recorded testimony from White House aides describing the angry Dec. 18 meeting where a handful of Trump’s outside advisers, including his personal lawyer Rudy Giuliani, attorney Sidney Powell and Patrick Byrne, former chief executive of Overstock.com, encouraged him to fight the election result.

“I don’t think any of these people were providing the president with good advice. I didn’t understand how they had gotten in,” Pat Cipollone, Trump’s former White House counsel, said in video testimony.

Giuliani, who was escorted from the White House grounds, said in video testimony his argument had been: “You guys are not tough enough. Or maybe I put it another way: You’re a bunch of pussies, excuse the expression. I’m almost certain the word was used.”

The attack on the Capitol, following a speech Trump gave at a rally outside the White House, delayed certification of Biden’s election for hours, injured more than 140 police officers and led to several deaths.

‘A MOB WAS BEING ORGANIZED’

The committee presented evidence that it said showed Trump’s call for his supporters to march on the Capitol was not spontaneous but had been planned in advance.

The panel showed an unsent Twitter message about the rally, with a stamp showing Trump had seen it: “Please arrive early, massive crowds expected. March to the Capitol after. Stop the Steal!”

The committee also played audio testimony from a former employee of Twitter describing his fear after Trump’s December tweet and deep concern on Jan. 5 about the possibility of violence on Jan. 6.

“It felt as if a mob was being organized and they were gathering together their weaponry and their logic and their reasoning behind why they were prepared to fight,” the Twitter employee said, his voice disguised.

About 800 people have been charged with taking part in the Capitol riot, with about 250 guilty pleas so far.

The hearing also looked at links between right-wing militant groups, including the Oath Keepers, Proud Boys and the QAnon internet conspiracy movement, with Trump and his allies. Many Oath Keepers and Proud Boys participated in the Jan. 6 attack.

Two witnesses testified in the hearing room – Stephen Ayres, who has pleaded guilty to a federal charge for participating in the attack on the Capitol, and Jason Van Tatenhove, a former spokesperson for the Oath Keepers.

Ayres said he joined the march because he believed Trump, and that he had since lost his job, sold his house and no longer believes Trump’s “Big Lie” that the election had been stolen. “It changed my life, you know, definitely not for the good.”

Trump and his supporters – including many Republicans in Congress – dismiss the Jan. 6 panel as a political witch hunt, but the panel’s backers say it is a necessary probe into a violent threat against democracy.