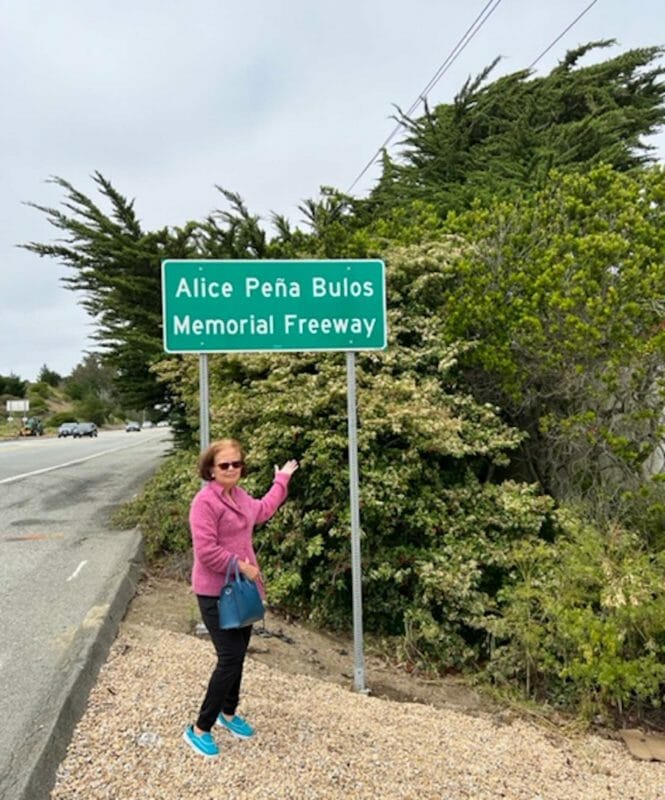 Elizabeth Bulos Ramilo was near tears to see her mother officially honored on Skyline Boulevard. CONTRIBUTED

Elizabeth Bulos Ramilo was driving to work on the morning of June 27 when a road sign grabbed her attention: ALICE PEÑA BULOS MEMORIAL FREEWAY.

Ramilo had long known of state and local officials‘ efforts to honor her mother in perpetuity, but she was unaware the sign already had been installed on Skyline Boulevard.

The South San Francisco resident said she was elated near tears to see the memorialization fulfilled.

“O, Ma, you see, your dedication to others is recognized by your allies and all the people you’ve helped realize their aspirations,” Ramilo shared her thoughts INQUIRER.net upon encountering the surprise sight.

Known officially as California Route 35 or SR35, Skyline Boulevard is almost 55 miles of highway between the City and County of San Francisco to the north and Santa Clara County to the south.  The panoramic thoroughfare meanders through San Mateo County and its contiguous towns of San Bruno, South San Francisco and Daly City, where thousands of Filipinos have resided for multiple generations.

“I called my children right away and they were also happily surprised to hear the sign celebrating their Mommy Alice is in place,” she said.

Ramilo is the only child of the late leader, who was the first Filipino American appointed by a sitting president to a federal advisory body when President Clinton named her to the National Council on Aging. She said seeing the sign every morning and every afternoon is like having her mother’s blessing each time.

“This sign is a tribute to my mother and all Filipino Americans,” Ramilo emphasized.

Ramilo was thrilled to know there is one more sign further along SR35, atop the access to Thornton Beach across John Daly Westlake Boulevard in Daly City, where Filipinos compose almost 40% of the population. 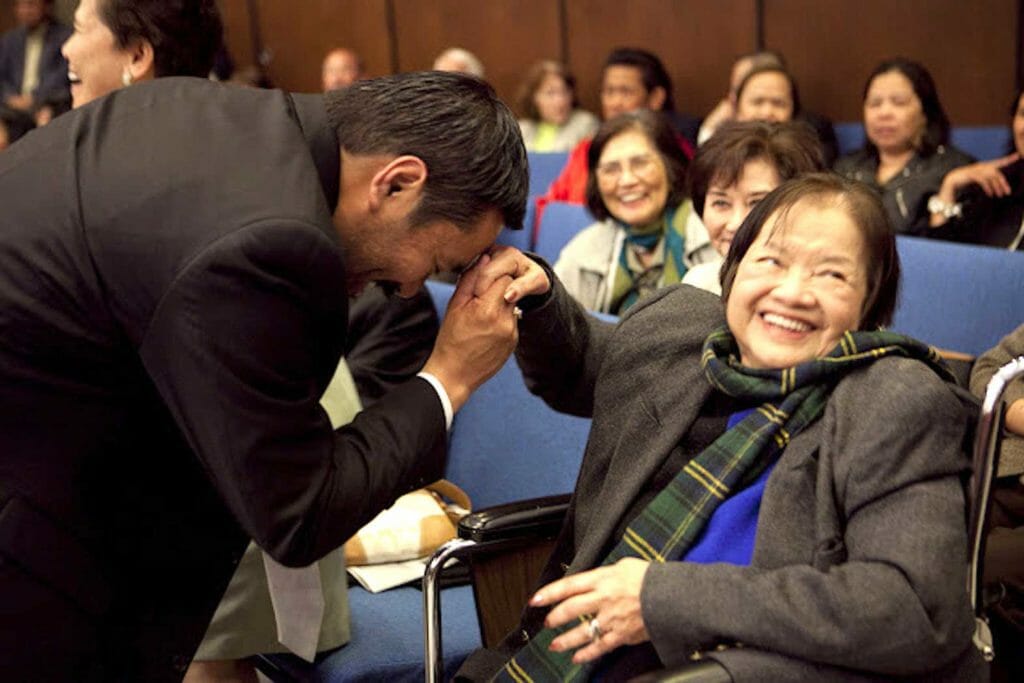 “My family is extremely grateful to Daly City Vice Mayor Ray Buenaventura for proposing the project to Assembly Member Phil Ting, who filed the resolution in the State Legislature,” said Ramilo.  “We thank them, the City Council, donors and supporters for remembering Mommy.”

At press time a formal unveiling of the sign was scheduled for 1 p.m., Saturday, July 16, Buenaventura told INQUIRER.net.  He was unable to specify the exact location.

“We’re waiting for permission from CalTrans to do partial road closure for the ceremony,” he said.

Buenaventura was grieving the loss of his mentor who died of heart failure in October 2016, when he began contemplating an ideal testimonial for her.

He said he was driving along SR134 Ventura Highway Southern California when a sign identifying portion of the road as President Barack H. Obama Highway* inspired him to look into the possibility of a similar memorial for the former University of Santo Tomas sociology professor-turned-community activist in California.

Buenaventura reached out to Democratic legislator Phil Ting, State Assembly Member representing District 19, which covers the southern tip of San Francisco and northernmost Daly City.  Over 43 % of the area residents identify as Asians, with whose leaders Bulos collaborated, particularly on political empowerment.

“We see the influence of Alice Peña Bulos throughout our communities, as well as in elected local and state government leadership. That’s why she’s considered the ‘Godmother’ of Filipino American politics and empowerment. It’s my honor to carry the legislation that celebrates her legacy,” he said.

“Throughout her life, ‘Tita Alice’ was committed to opening doors for young FilAms who wanted to enter public service and politics, but did not see themselves represented in those places of power. Tita Alice has left an everlasting mark in commuters all over California and especially here in the Bay Area where she called home. While she is no longer with us, her memory lives on in her family and the numerous friends, supporters, and pupils she inspired over her decades of service.”

The State Legislature approved ACR165 August 28, 2020 allowing supporters to raise funds for the signs projected for installation by 2021.  A $10,000 fund was required to ensure no public funds would be spent on the project, Buenaventura told Inquirer.net.

Bulos is the first known Filipino American commemorated with a portion of a state freeway.

Last year South San Francisco renamed its Westborough Park recreation center the Alice Peña Bulos Community Center in honor of its new namesake who championed empowerment from her home a few steps away for 40 years.

*Freeways and highways are interchangeably used by there’s a difference between the terms.  All freeways are highways but not all highways are freeways.  Edward Basset, a New York lawyer, is credited with coining “freeway” in reference to “controlled access urban facility based on the parkway concept but open to commercial traffic.” Freeways are accessible only through ramps.  Highways are usually two-lane roads.  Speed limits tend to be higher on freeways than highways.