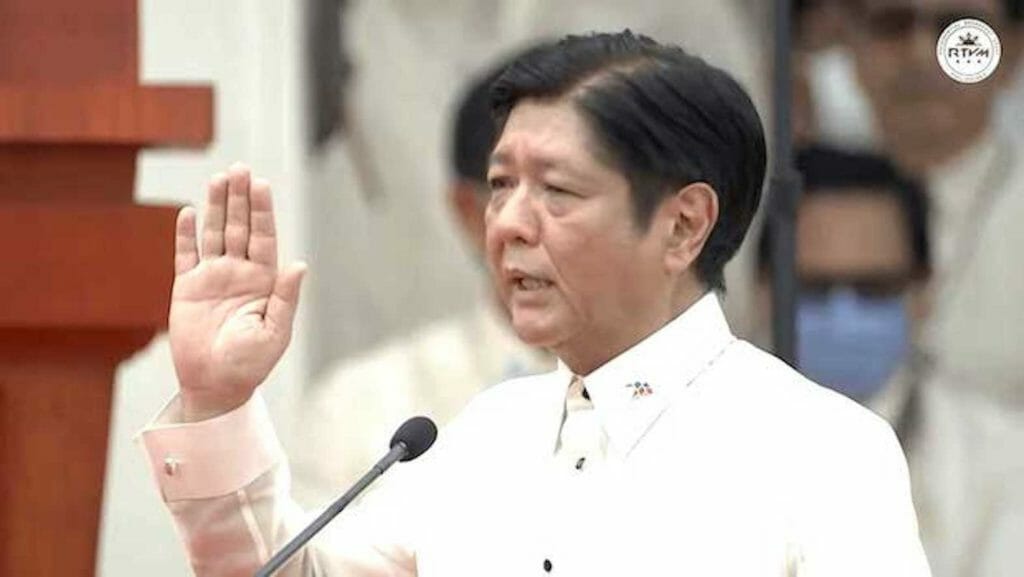 On the day we celebrate freedom in America, Philippines President Bongbong Marcos must be glad we take some of our democracy seriously.

Here in the land of the rule of law, the U.S. gives immunity to world leaders for whatever ails their legal souls. Even people named Marcos.  And that means a scofflaw like Bongbong will get to use a “come to America free” card, courtesy of Joe Biden.

Of course, all this sounds the alarm to the relatives and friends of the more than 70,000 Filipinos who were detained by Marcos’ father, and the estimated tens of thousands who were tortured by the Philippines during the family’s rule under martial law.

I just wasn’t sure what would happen last week when Pres. Joe Biden didn’t go to the Bongbong inaugural and oathtaking in Manila.

Of course, Biden had better things to do, like attend the NATO Summit. That conveniently let Biden give an appropriate backhanded slap to the newly elected son-of-a-dictator.

What else is it when the U.S. delegation was helmed by the Second Gentleman (that would be Douglas Emhoff, the husband of the absentee Vice President Kamala Harris).

Was the message that Bongbong doesn’t rate? At least they didn’t send a White House valet who would have at least been Filipino.

Saving the day was delegation member Rep. Bobby Scott (D-Virginia). Scott represents the heavily Fil-Am Hampton Roads area, is believed to be the first Congressman elected with some Filipino heritage, and is the co-chair of the U.S.-Philippines Friendship Caucus.

Scott’s unique Fil-Am immigration story involves his grandfather Valentin Cortez Hamlin from Benguet, PH, who stowed away on a ship during the Spanish American War, was adopted by a U.S. Navy officer, then brought to live in North Carolina.

That would make Scott’s blood infused with some seminal U.S./Philippines history. But that’s if you buck the trend and actually put a value on history, at least the parts you don’t want to forget.

When Biden didn’t go to Bongbong, my first thought was well, of course. Marcos the father was such a corrupt leader, how could the U.S. support the rehabilitation of the family name?

It’s not like cozying up to murderous Saudi oil money. It is, however, still an ally. Sending Emhoff gave Biden some distance from Bongbong.

But now we learned this weekend that Emhoff delivered a letter that Philippine officials said was a future invitation from Biden. Officials said it read: “I hope you can come to Washington once our teams find an appropriate time.”

Sounds like more than a secret rendezvous at a point-point-joint. Officials told the Inquirer on Saturday: “President Marcos responded by saying he hopes to do so as soon as our schedules permit them.”

And so a date in the U.S. is forthcoming, and mostly because Bongbong is immune from arrest. Elections have consequences?

If you’ve wondered why Bongbong hasn’t come to Daly City for karaoke the last ten years, it’s because in 2012, a U.S. Court of Appeals for the Ninth Circuit got tough on Ferdinand Marcos’ widow, Imelda and Bongbong for violating an injunction that barred them from touching the billions of dollars of the Marcos estate, much of which is believed stolen from the Philippine treasury.

It was the U.S. District Court in Hawaii in 1991 that first barred the Marcoses’ from the money because it was seen as a way to pay the damages to human rights victims of the Marcos regime. And the court took further action when the Marcoses’ started giving back money to the Ramos government in 1992.

Last week, victims of martial law were gathered in the Philippines as protesters against the Bongbong Inaugural. Now many of those who live and work in the U.S. will have their chance to show the world that the second coming of the anti-Marcos movement is for real.

The Filipino passion to avenge the human rights injustices of the Marcoses has not ended. President Biden has just reignited it.

It’s still hard to believe that Marcos won by a landslide in the Philippines given all we know about the dictatorship of his father.

Then again, what are we to make of Republicans in the U.S. who when given the damning testimony of the January 6th Select Committee Hearings there’s still support for Trump and the Big Lie?

The fireworks from this past week were a prelude to the Fourth.

The hearings are intended to help us understand what really happened when a mob nearly prevented a presidential election from being certified. But we can’t get to that until someone has the courage to tell the truth.

And it needed to be someone on the MAGA inside, like Cassidy Hutchinson, 26, a white female conservative Republican.

You want to know what it was like on the day of Jan. 6 from within the White House? Hutchinson was in the West Wing, a top aide to White House Chief of Staff Mark Meadows.

And she did what even her old boss has failed to do–cooperate with the committee. At the hastily set up hearing this week, under oath, garbed in a white suit jacket, she was like a symbol of light.

Hutchinson had the courage to break the Trump code and speak out.

We learned that the morning of the big rally on Jan. 6, White House Counsel Pat Cipollone told Hutchinson to “make sure we don’t go to the Capitol.”

The consequences? Hutchinson said Cipollone told her that “we’re going to get charged with every crime imaginable if we make that movement happen.”

Hutchinson testified it wasn’t the first time Cipollone mentioned that going back to the Capitol would look like they were obstructing the Electoral College count or generally inciting a riot.

But as Jan. 6 evolved, Hutchinson said that Trump knew the crowd was violent and armed, and that once the rally attendees made it to the Capitol, Trump wanted to be there.

Hutchinson testified about an incident after the rally in the presidential limo, “the Beast,” when Trump was told by Secret Service chief Bobby Engel that they were going back to the White House and not the Capitol.

“I’m the f—ing president,” Trump said according to Hutchinson’s testimony. Then Hutchinson was told Trump tried to grab the wheel and physically threatened Engel.

Is any of this activity criminal? Not any more than Trump staining the White House walls by throwing plates with ketchup and flipping tablecloths, another revelation from the hearings.

More important, and potentially criminal, are the reports that Hutchinson received intimidating reminders to be loyal to Trump World, a possible example of witness tampering.

Our lower bar as Americans is to ask if the unhinged Trump is a person who should have ever been president, or should be president again.

It’s a question for all of us, especially Republicans like Korean American Michelle Steel, a member of Congress representing California’s 48th. She still backs Trump. Her Democratic opponent Jay Chen sure doesn’t.

The frustration has been in the silence of those in the know. White House lawyer Cipollone has now been subpoenaed and is negotiating the manner of his cooperation. Others have pleaded the fifth or are hiding in their silence. Time for them to make a choice, as should the large number of Asian American Filipinos who are Republicans.

Cheney’s question for all

Liz Cheney, the vice chair of the House select committee, gave a speech at the Reagan Library last Wednesday, talking about the crossroads our country is in.

She called out Trump as a “threat to democracy” and said: “Think about the choice in front of us. We have to choose because Republicans cannot both be loyal to Donald Trump and loyal to the Constitution.”

Cheney got 19 seconds of applause.

It could be the tidal wave of change about to come. People should take this long weekend to think about what the Sixth has to do with the Fourth, and what it means to be an American in a functional, viable democracy.

The Republicans at the Reagan Library event erupted again when Cheney said, “We must not elect people who are more loyal to themselves or to power than they are to the Constitution.”

It was fireworks to my ears, the sound of people coming to their senses. And maybe an America finally coming together as one, and not just for the Fourth of July.

NOTE: I will talk about this column and other matters on “Emil Amok’s Takeout,” my micro-talk show on AAPI and Filipino issues. Live @2p Pacific. Livestream on Facebook; my YouTube channel; and Twitter. Catch the recordings on www.amok.com.