The more things change, the more they remain the same

The more things change, the more they remain the same 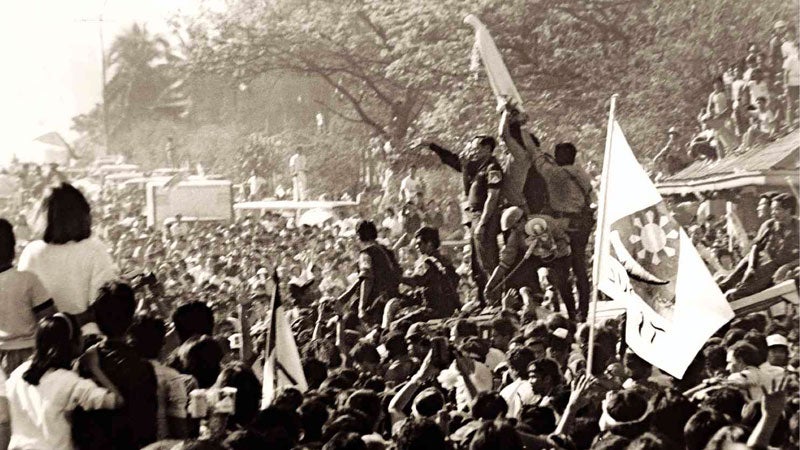 NEW YORK — Was the hope drunk wherein we dressed ourselves, to paraphrase Lady Macbeth?

For four days in February of 1986—four days that shook the world—an outraged populace, sans bloodshed, said, “Enough! Time for a Change.” An aging tyrant and his kleptocratic wife and family were forced to flee to balmy Hawai’i. The nation was euphoric, indeed, drunk on the hope that finally the darkness brought on by the Marcoses would forever be dispelled, and the dazzling light of a true democracy allowed to shine.

A widow had come, who had triumphed in the snap elections, to open the window onto a future that looked glorious. Corazon C. Aquino, with no political baggage and no experience in governance, took over as president of a deeply wounded country, who looked to her as one would a long-absent mother come to nurture one back to health.

Then, those days seemingly pointed to a rejuvenation of the national psyche, and a cleansing of all the toxins ailing the body politic.

Thirty-two years have elapsed since that magical moment.

Should we celebrate or should we commiserate? What have we achieved? Has there indeed been a change for the better? What is the state of the nation?

Have we gone further up the road to a robust democracy? Or have we reverted to form, becoming once again a work very much in progress, showing disturbing signs of backsliding into authoritarianism?

The Marcoses moved abroad, but in truth they never left. Their network remained, even if for a while weakened, by the new dispensation. Today, Imelda, Ferdinand Jr., or “BongBong,” and Imee are active politically, and continue to be among the country’s power brokers. It is no secret that the Marcoses have been among the current president’s backers.

The cronies for the most part remain untouched, with only Senator Juan Ponce Enrile, the prime enforcer of martial law, spending a bit of time behind bars due to charges of plunder (old habits do die hard, if they die at all), committed decades after 1986. He was released due to ill health, though he seemed to rebound on that score rather fast once he was out—proof of freedom’s salutary effects on both body and soul.

And now with Duterte as president, one could very well exclaim, Déjà vu! As pointed out in an earlier column, Duterte is Marcos redux with a vengeance, the barbaric war on drugs being Exhibit A. Ironically, by allowing the burial of the dictator at the Libingan ng Mga Bayani, or National Heroes Cemetery, Duterte has resurrected the hopes of the die-hard Marcos loyalists for a return to the good ol’ days, as they envision it.

A U.S. intelligence report, released by the Director of National Intelligence last February 13, has labeled Duterte as one of the threats to democracy in Southeast Asia. The report highlights Duterte’s threats to suspend the Constitution, following that up with a revolutionary government and the possibility of extending martial law, now in place in Mindanao, nationwide.

This is a judgment I won’t question, though the same intelligence agency might take a closer look at the U.S.’s own shameful history of bolstering autocratic rule in countries deemed allies. And they need to pay closer attention—and this I suppose is what the Mueller investigation is doing—to President Trump. The man with the orange hair is no friend of the democratic process.

And there is Duterte’s cozying up to China, even joking recently that if China wished, it could make the Philippines a province. But that “joke” may not be too far from what could happen, given the president’s wimpy stance regarding China’s illegal claim to islands and waters that rightly belong to the country whose territorial integrity he is bound by the Constitution to defend.

Post-1986, the dominant attitude was, the malignant tumor has been excised, now we can relax. Well, to continue the analogy, a cancer may initially be defeated, but it takes a while before the body can be said to completely rid of it.

Getting rid of the dictator was the easy part. The hard part is in keeping the body politic free from the toxins that continue to assault it. What made People Power succeed? One factor, and the main one in my view, was simple: Outrage across a broad spectrum, forging a coalition of the urban poor, the working class, the students, the entrepreneurs, the middle and upper classes, and even the military.

Right now, that broad-based outrage is sadly absent, especially among the middle (muddled?) and upper classes, making them complicit in the Duterte administration’s continuing and deliberate erosion of the country’s civil liberties. If they think the government’s egregious conduct won’t breach their gated communities eventually, they are sadly mistaken.