Catholic Bishops and diocesan synodal teams of the Ecclesiastical Province of Manila gathered last week at the Pope Pius XII Catholic Center in Manila to conclude a synodal consultation on challenges the church must tackle.

Pope Francis formally opened the synodal consultation process in October 2021 at the Vatican with the theme “For a Synodal Church: Communion, Participation and Mission.” Since then, churches and Christian communities on all levels worldwide have held a series of consultations.

“Somehow, this consultation allowed me to dream again,” shared Donna Caacbay, diocesan lay coordinator of Paranaque’s synodal team. “It inspires me to know there is still hope for the poor.” She was one of those invited to attend and who actually took an active part in the concluding whole-day Manila synodal journey. 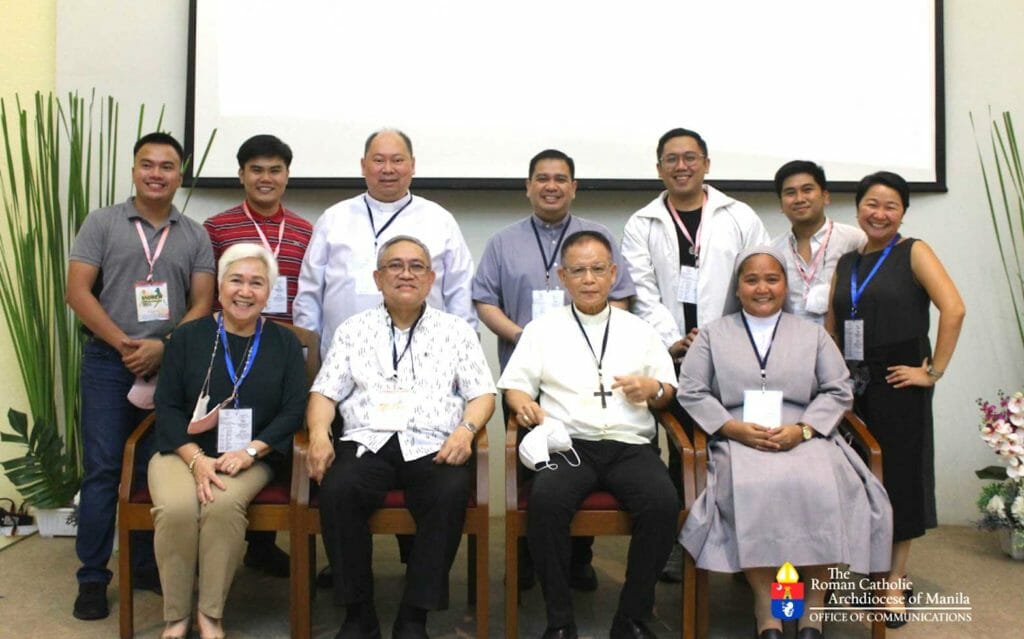 Some of the participants at the recent synodal consultation in Manila.

“The Church, though consistently extending aid and assistance to those who are in need, especially in the peripheries, still has a lot of work to do,” said Caacbay.

According to her, the Church should not just lend a listening ear but should completely involve herself in the lives of the faithful the way Christ did.

The Ecclesiastical Province of Manila is comprised of the Archdiocese of Manila, Dioceses of Antipolo, Cubao, Imus, Kalookan, Malolos, Novaliches, Paranaque, Pasig, San Pablo, Apostolic Vicariate of Puerto Princesa and the Apostolic Vicariate of Taytay (Palawan). The Military Ordinariate of the Philippines, represented by its Bishop, Oscar Florencio, also joined in this concluding synodal consultation.

Synodal coordinator Msgr. Gerardo O. Santos, expressed joy that through this consultation, many voices were heard.

“Joy is one of the most wonderful features of our gathering. Joy is shared when stories of faith are shared. Stories of faith, in turn, give us hope,” added Santos.

As Pope Francis calls for a synodal church or a listening church, among the problems that arose during the consultation was the neglect to listen the tiny voices of the people in the church.

“The message is clear: Every one of us is a companion in a synodal journey. We can start with our fellow Catholics but we can go beyond – journeying with fellow Christians, fellow believers, fellow Filipinos, and fellow human beings. The Holy Father’s call to synodality is universal,” said Bishop Pablo Virgilio David

David is the President of the Catholic Bishops Conference of the Philippines (CBCP) and Bishop of Kalookan, one of the suffragan dioceses of the Ecclesiastical Province of Manila.

“In the synodal journey, the Church,” according to Bishop David, “should learn to listen especially to the voiceless who are mostly neglected. “Listening, he added, requires a lot of humility.”

Commenting on the victory of Bongbong Marcos, the dictator’s son, in the May 2022 presidential race, Jayeel Cornelio said that it seems that Filipino Catholics are not anymore keen on listening to their bishops and priests who talked about the morality of politics. Dr. Cornelio is a professor of Development Studies at the Ateneo de Manila University.

Last week, in a separate forum, Bishop Junie Maralit of Boac said that the message of the bishops and priests, though remaining “moral leaders with moral ascendancy,” did not have that impact on the Filipino people, maybe because they might not have been listening to them and their stories. This was also in connection with the spirit of synodality. The bishop’s comments are also related to the victory of another Marcos as Philippine president.

Nevertheless, Caacbay said that she is still optimistic that the Philippine Church can stand up from where the Church failed.

“Coming from the pandemic, when you look at the situation in the Philippines, it appears nothing has happened in spite of the many documents we have produced. But participating in this synodal consultation, one gets the feeling that there’s still hope for the Church,” Caacbay said in English and Pilipino.

From the bishops conference’ level, a consolidated report will then be presented to the Synod of Bishops at the Vatican. The two-year journey will culminate in the Synod of Bishops in October 2023, a gathering of bishops that will produce a final document which will serve as a pastoral guide in the future.

The event was concluded by the celebration of the Holy Mass presided over by Manila Archbishop Jose F. Cardinal Advincula. Kalookan Bishop Pablo Virgilio David served as the homilist.