First Fil-Am Federal Judge Lorna Schofield: ‘I had no Filipino consciousness growing up’

First Fil-Am Federal Judge Lorna Schofield: ‘I had no Filipino consciousness growing up’ 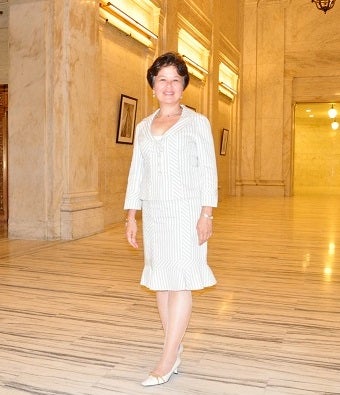 Judge Schofield says she had a “great love of debate, speech and theater” even as a child. THE FILAM/Elton Lugay

Born in Indiana, Schofield traced her roots to New Haven’s blue collar community. Her father left the family when she was 3. Her mother, Priscilla Tiangco, a pharmacist from Batangas who graduated from UP, raised her as a single parent.

“There were no other Filipino families in New Haven,” she said when interviewed by The FilAm at her office at the Thurgood Marshall Courthouse on Foley Square in downtown Manhattan. She recalled two Filipino families in nearby Fort Wayne, but interaction with them was largely limited to holidays.

In her classroom, she had only one African American and two Hispanic classmates. She was the only Asian.

“I didn’t have much of an Asian identity,” she said. “The people of Indiana overlooked the fact that I was different…that my mother spoke with an accent.”

What she remembers, and this story made her laugh as she drew from the well of her past, was being cast in the annual Christmas pageant as the one of the three Marys.

“I was always the Asian Mary and I would be with the White Mary and the Black Mary holding a baby,” she recalled while motioning a cradling gesture with both arms.

Schofield conceded being raised an all-American girl. No speaking Tagalog at home, and eating potatoes while her mother ate rice. Hence, she acknowledged no real Filipino consciousness developed as she was growing up. She did not feel like a minority.

“I have a theory,” she said on why her mother raised her the way she did. “She was in college during the war. I read her transcript, and one of her years in college was interrupted. When the Americans came, she saw them as liberators and heroes. Since then, she wanted to become American, marry an American and have American children.” Her mother died when Schofield was 20.

Schofield was previously married, and has a daughter who is now 25. “There she is,” she pointed to a framed portrait of a young woman dressed as if she was going to a prom, sitting on her bookshelf. Schofield is her father’s name, not her ex-husband’s.

The judge declined the use of a tape recorder for our interview, but relented on being photographed. She was dressed in a business suit of lime green stripes with ruffled hem, and made a remark about hoping to “not look frivolous.” The photo op was held at the courthouse lobby where our camera was being held by the building’s security.

“Top floors are overrated,” she said by way of a joke, as we were coming down the stairs from her second-floor chambers. True, the views are worth living in a Manhattan high-rise, but she said she’s quite pleased with her lower-level office and preferred the convenience of easy exit in case of an emergency.

From lawyer to judge

She showed us a PowerPoint album of her family – her mother as a young bride; her mother together with her father dressed in his Air Force uniform; herself when she was five photographed with her mouth slightly open as if she was caught in the middle of a conversation. It was her fifth birthday party in the Philippines, and she was photographed with all her first cousins.

“Even as a kid I had a great love of debate, speech and theater,” she said, a natural fit for the law profession. 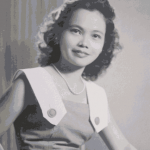 At Indiana University, she graduated with a Bachelor of Arts degree majoring in English and German. She pursued graduate studies in Comparative Literature (German, French and English) at Brown University in Rhode Island. She earned her Juris Doctorate from the NYU School of Law in 1981. She became an associate at Cleary, Gottlieb, Steen & Hamilton, representing clients in commercial and civil litigation, as well as transactional matters. Working at Cleary brought her to the Philippines in the 1980s when the firm represented the government of the Philippines, which was renegotiating its sovereign debt with the major international banks.

In 1984, she became an Assistant U.S. Attorney. As a federal prosecutor under then Mayor Rudy Giuliani, she investigated and tried criminal cases, including tax evasion, white collar fraud, international arms sales and terrorism, according to a CV furnished The FilAm.

She returned to private practice in 1988, becoming a partner at Debevoise & Plimpton in 1991 and litigating complex commercial disputes. Possibly her most celebrated case was representing comedian Rosie O’Donnell in a dispute with her magazine publisher. It was, she said in a published interview, her “most memorable and most fun” case. She landed TV interviews with the “Today Show” and Dan Rather’s “Sixty Minutes.”

She retired from Debevoise & Plimpton in 2011. “When I became a partner at Debevoise, I was one of six women partners, out of 88 partners,” she said. “I was the only Asian partner, but not the first minority partner.”

As it was in Indiana, many in the profession were not aware she was Asian. She recalled a conversation with a colleague right after she became a partner, when she said the firm had another minority partner. The colleague asked, “Who?” That anecdote elicited soft laughter. 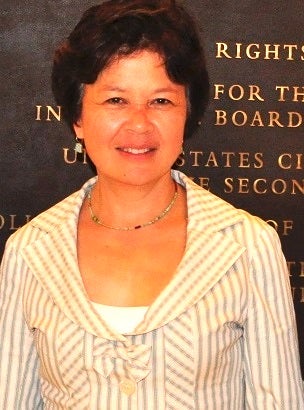 “I never felt like a minority growing up.” CONTRIBUTED

Gender, more than race, has been more of a hurdle in the male-dominated legal profession. “I sensed more of the gender challenges,” she said.

When Senator Charles Schumer recommended her, and later President Obama nominated her, to the position of Article III Judge of the U.S. District Court of the Southern District of New York, Schofield reached out to the Filipino community for support. Diversity was important to the process; it was to Senator Schumer and to President Obama, she said.

She didn’t know any Filipino organizations, but the community, such as lawyers’ groups, also reached out to her and welcomed her warmly. In the past year and a half, she has become visible, speaking at clubs and marching in the June 2 Philippine Independence Day Parade on Madison Avenue.

“After my mother died I had no contact with Filipinos,” she said, her contact limited to her mother’s sister in Manila, until she too died a few years later.

On December 14, 2012, her historic confirmation as the first Filipino American federal judge in American history was announced. In congratulating her, the Asian American Bar Association of New York described Schofield as “a highly qualified jurist” whose life story is the “epitome of the American Dream.”

Schofield is now discovering, perhaps for the first time, her Filipino identity. After receiving the support of Filipino organizations in the confirmation process, she pledged to try to give back to the Filipino community whenever asked, of course within the considerable ethical constraints placed on federal judges.