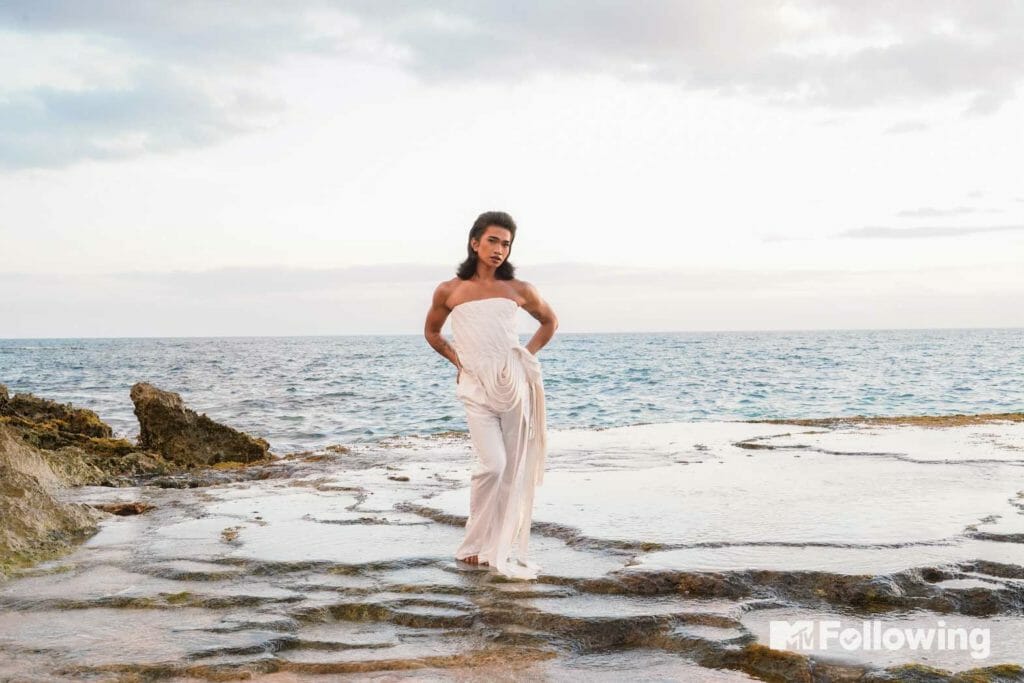 NEW YORK—As Season 2 of his reality TV show rolled out on MTV, Bretman Rock finds himself in some unfamiliar places. Last week he was in Cannes for the first time, his first foreign trip since immigrating to the United States as a seven-year-old. There, Logitech announced his appointment as its creator-director supporting a network of influencers.

“It’s my first time abroad so I really don’t know how to act here,” Rock told INQUIRER.net via a Zoom interview while in Cannes. “I’ve been saying bonjour, oui, merci… I’ve just been fulfilling my European fantasy here and I love it because I’m the only brown person here and I feel so hot.”

Season 2 of MTV’s “Following: Bretman Rock” documents another first in the YouTuber’s life — seeing a therapist. What he initially thought would be a “cringe” experience, ended up giving him some major takeaways about mental health.

“I think it’s very important because the story of first-generation immigrant kids, I feel like regardless of where you come from in the world, we all kind of have the same story where our parents didn’t have access to a therapist or even pills to help them with mental health,” Rock said.

Admitting to having resented his mom for a long time because growing up, his anxiety attacks had been dismissed as him “just being dramatic,” YouTube’s beauty guru became aware of and started healing from his “generational trauma” after seeing the therapist.

“The main takeaway that I wanted my audience to have is that it’s okay to have mental health issues, it’s okay to talk about it and it’s also okay to forgive your parents who might not have had access to therapy or allowed you to explore that,” Rock said.

Asked for some advice for those experiencing anxiety, depression or any behavioral mental issues, his answer was down-to-earth.

“That is a heavy question because I feel like this is something that I’m still learning on my own and there is really no way of answering this question without sounding cliché. I can say like check on your friends, check on your family, but everyone says that. So I really can’t even think of an advice that is unique but I think my biggest advice and my biggest takeaway with mental health is that it’s really up to you, at the end of the day, to work on your mental health. I would just say it is not [being] weak to want to better yourself. If anything, it is a sign of strength and I think you just have to switch how you think on things,” Rock said.

One practical advice is to go solo when seeing a mental health specialist. “If I had to give any advice, your first therapy session should not be with your sister. Do it by yourself, okay, because my god, my sister and I, regardless of what we’re doing, we’re going to bicker, okay. So I would say, my first time, I learned that I needed to do it by myself first. I think I needed to work on myself before I start working with my relationship with other people,” Rock said.

The social media influencer’s tumultuous relationship with sister Princess Mae is one of the highlights of “Following: Bretman Rock”’s Season 2, based on trailers released by MTV. Despite his increasing frustration, Rock explained that different “love languages” is at the root of miscommunications between him and his sister, or even with his mom.

His personal touch is spending quality time with the beloved person. His sister, on the other hand, needs and uses words of affirmation to feel loved. Meanwhile, his mom says “I love you” with thoughtful actions like cooking adobo and cutting fruits for him. Perhaps her most meaningful gesture was buying his first make-up, which signaled her acceptance of his gayness, something that his late father also tolerated as long as he pursued sports.

“My family knew I was gay at a very young age. I never really had to come out. I think a lot of Filipino kids don’t really come out because your parents just know you’re gay. I don’t think I’ve ever sat my mom down to say, ‘Mom, I’m gay.’ But my Dad has always said that I could be gay as long as I do sports, and sports was something very special to him for some reason. He didn’t even play sports himself so I don’t know why he projected that towards me, but they just signed me up for every freaking sports there is to do. Yeah, I think he was training me to become like the WWE [World Wrestling Entertainment] but I ended up going for the Divas World Cup,” Rock said.

Bretman Rock Sacayanan Laforga in real life, Rock’s first names were influenced by his father’s love for wrestling and is a nod to professional wrestlers Bret Hart and The Rock. Now at 23 with a YouTube channel that has almost 9 million subscribers, Rock has accomplished so much over the past five years. He has won the People’s Choice Awards, MTV Movie and TV Awards and Streamy Awards in succession, met Michelle Obama and became co-chair of When We All Vote. Last year, he made history as the first male and openly gay man on the cover of Playboy magazine.

But the downside of fame is emotional exhaustion, which the reality TV star has alluded to in the past. During the interview with INQUIRER.net, Rock revealed that he has managed to find a formula for keeping his sanity. It includes meditation, taking in the sun and constantly reminding himself that he is the human being behind Bretman Rock.

“My Filipino grandma taught me that the first rays of light are the purest. And so because of that, I became a morning person and I meditate with the sun every morning now. And I don’t know if you believe in spirituality and stuff, but I feel like I get messages from her and I feel like I get kisses from my grandma through the sun sometimes. So yeah, I take care of Bretman Rock by meditating and connecting with my grandma whom I love so much, and separating work and personal life,” Rock said.

Is there anything more he wants out of life?

“I feel like I have a bigger mission back home and I would love to go home and do something that matters for my community, especially the LGBT community back home. So I think what’s left is really my Angelina Jolie era. All the resources that I have now, I have everything that I’ve ever wished for. I’m literally on the Season 2 of my reality show. You know, who has that? So I think for me, since I have everything I’ve already manifested, the only way now is give it back,” Rock told INQUIRER.net.