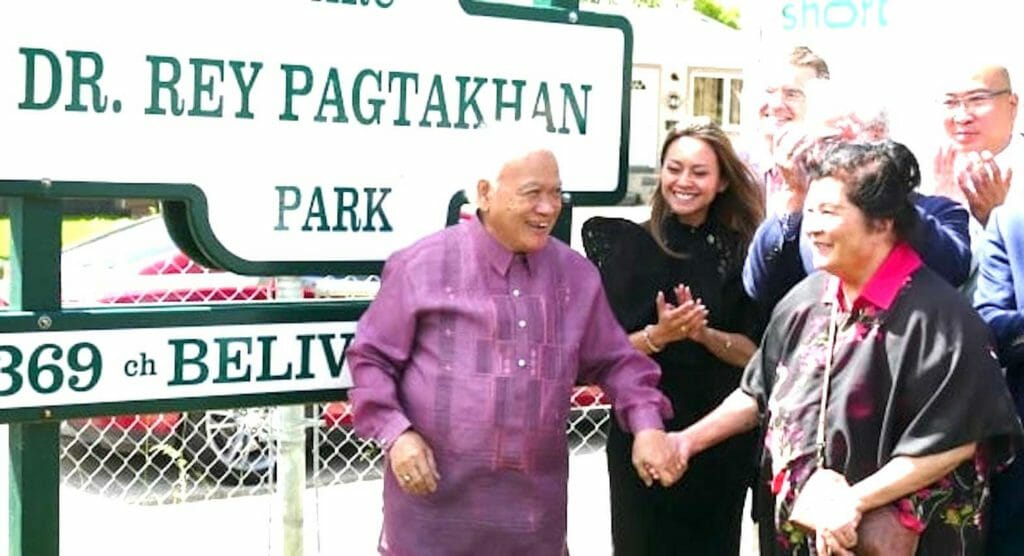 A park in in Winnipeg, Manitoba’s St. Vital neighborhood was officially renamed “Dr. Rey Pagtakhan Park” Saturday, June 25 in honor of the first Filipino Canadian to be elected to the Canadian Parliament.

Pagtakhan, wearing a light-purple barong Tagalog, told the crowd at the renaming ceremony that the honor was a “message that the Filipino Canadian community has come of age and that it has made contributions to our common city and our common country.”

Pagtakhan was elected as Member of Parliament for Winnipeg North-St. Paul in 1988 and served in that position until 2004, including as a Liberal federal regional minister for Manitoba.

In 2017 he was invested into the Order of Manitoba  for his contributions to medicine and public and community service.

Winnipeg Councilor Brian Mayes (St. Vital) said on Saturday that he was glad to finally get the chance to recognize Pagtakhan, after the event was delayed for three years by poor weather and Covid-19 restrictions.

Pagtakhan’s nephew and former city councilor Mike Pagtakhan said although his uncle served in another end of town, “Dr. Rey’s a big part of St. Vital. He served as a school trustee in St. Vital and he just lived close to St. Vital Park, so this park has got a lot of personal significance.”

Manitoba Liberal Party Leader Dougald Lamont, who’s also the MLA for St. Boniface, said he wanted to be there on Saturday to pay his respects to such “a truly historic figure.”