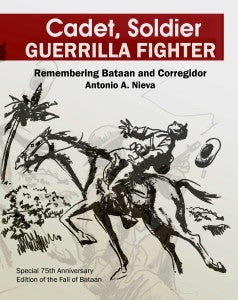 HONOLULU — A new edition of the personal memories of the late Antonio A. Nieva, illustrated by the author’s original sketches of war and remembrance, is now available at Amazon.com and other book venues.

Cadet, Soldier, Guerrilla Fighter: Remembering Bataan and Corregidor follows the young Tony Nieva as he said adios to his ROTC days in Ateneo de Manila, armed with a pistol from his ilustrado godfather and kisses from his novia, to join the USAFFE (United States Armed Forces of the Far East).

The book blends historical facts with personal vignettes, giving intimate, moving, and sometimes humorous accounts of how World War II affected soldiers and townsfolk, housewives and society matrons, hustlers and gamblers, and the young, idealistic 20-year-olds who fought a guerrilla war in the Philippine barrios and forests.

After surviving the Death March and the even more atrocious conditions at Camp O’Donnell prison camp in Capas, Tarlac, Tony left Japanese-occupied Manila to become part of a storied guerrilla group made up of college boys, the Hunters-ROTC. 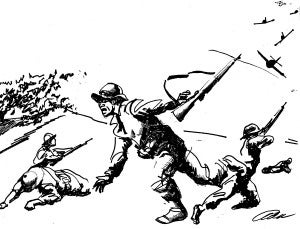 “The book is a much-needed addition to literature on Filipinos who fought in World War II,” says Dr. Patricio Abinales, head of Center of Philippine Studies at University of Hawaii. “Here are stories of young men who were forced by the circumstances to become ready to die in defense of the homeland. They faced the enemy with very little resources, but the Filipinos and

Americans who made their last stand in Bataan and Corregidor held back the well-armed and well trained Japanese imperial army while in the rest of the colonial governments in Southeast Asia collapsed like a house of cards in a week or two.”

Cadet, Soldier, Guerrilla Fighter intersperses the horrors of the tortured and dying during the Bataan Death March with stories of a failed boat escape (not knowing what else to do, Tony and his friend Val returned to the Death March) and the procurement of chicken from a Japanese prison guard who didn’t know the difference between five and ten peso bills. The Filipino soldiers were released from Camp O’Donnell as part of Japan’s strategy to unite Asians under a Greater Co-Prosperity Sphere free of western colonizers.

They found Manila Japanized: Dewey Boulevard had become Heiwa, Taft Avenue Daitoa; everyone had to learn Nippongo; and some of Manila’s 400 collaborated with the new power. But did they? “Most of the double plays were so successful that soon the question became who was who?” the author relates. While BSers (buyers, sellers, and bullshitters) wheeled and dealed, Manileños during the Japanese occupation managed to enjoy “everybody’s parties” and “floating casinos” (floating from place to place). 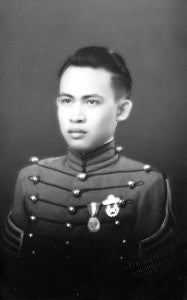 Tony Nieva as a cadet.

Cadet, Soldier, Guerrilla Fighter recalls how a future president, mistaken for a Japanese, narrowly eluded execution; and how, years later, Ferdinand Marcos would face an opposition candidate, Raul Manglapus, who, under the guise of a choir boy, had once planned a bloodless prison jailbreak from Muntinlupa prison with Fr. Jaime Neri and other guerilla fighters.

As Captain Lancer with the Hunters-ROTC Guerrillas, the author gives a first-hand account of the Los Baños Raid that freed nearly 2,000 American and Allied civilians as Japan’s sun was descending into defeat. The Hunters, including its leaders Teddy Adevoso, Tabo Ingles, Frisco San Juan, and Tony Nieva, would remain colleagues in the fight for Filipino World War II veterans’ rights, a battle that remains relevant to this day.

The new edition is edited and redesigned by Tony Nieva’s daughter, Pepi Nieva.