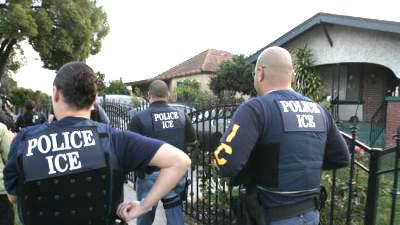 LOS ANGELES — The U.S. Immigration and Customs Enforcement (ICE) said that its agents have detained a total of 212 people around the Los Angeles area during a five-day worksite enforcement operation conducted Sunday through Thursday, February 15.  The targets were suspected of being in violation of U.S. immigration laws.

On Thursday, immigrant rights advocates blocked a Homeland Security van when it tried to access the Metropolitan Detention Center in downtown Los Angeles.

The ICE agency said Friday that 88 percent of those arrested in the sweep were convicted criminals, some of who will be prosecuted for entering or re-entering the U.S. illegally.  Others face deportation proceedings, or immediate deportation.

“The remaining individuals are in ICE custody awaiting a hearing before an immigration judge, or pending travel arrangements for removal in the near future,” said the Friday statement.

The ICE’s Homeland Security Investigations (HSI) also served 122 notices of inspection (NOI) to business in the Los Angeles area, alerting business owners that their hiring records will be audited by the ICE to determine if they are in compliance with the law or not.  Businesses found to be not in compliance will face civil fines and potential criminal prosecution, said the agency in the statement.

“Because sanctuary jurisdictions like Los Angeles prevent ICE from arresting criminal aliens in the secure confines of a jail, our officers are forced to conduct at-large arrests in the community, putting officers, the general public and the aliens at greater risk and increasing the incidents of collateral arrests,” said Homan.

He added, “Fewer jail arrests mean more arrests on the street, and that also requires more resources, which is why we are forced to send additional resources to those areas to meet operational needs and officer safety.”

The Los Angeles Police Department (LAPD) has a policy that prevents police from inquiring about people’s immigration status in hopes of encouraging all to freely cooperate with police  investigations without worry.

Police chief Charlie Beck said last December that the LAPD “is neither authorized nor responsible for the enforcement of civil immigration laws or regulations.”

On Los Angeles being sanctuary city, Los Angeles Mayor Eric Garcetti told NPR, “we absolutely are a city that not only does provide sanctuary to immigrants, but we defend them.”

U.S Attorney General Jeff Sessions called the “unconscionable” and said it “risks the safety of good law enforcement officers and the safety of the neighborhoods that need their protection the most.”

The recent Los Angeles sweep follows raids in Northern California where ICE agents demanded proof from 77 business that their employees were legally allowed to work in the country.  In January, federal immigration enforcement agents made sweeps across nearly 100 7-Eleven stores across the U.S.

The agency said that a total of 1,360 I-9 audits were conducted, 139 criminal arrests made, and 172 administrative arrests in the 2017 fiscal year.

Government statistics last year showed that of the 3.5 million Filipinos in the U.S., approximately 300,000 were undocumented

LATEST
Canada retail sales drop in July amid rate increases
How to Successfully Deal with Stress as an Entrepreneur
5 Steps to Pitch Your Press Release for FinTech to News Media
Twitter to interview Elon Musk, known for antagonistic testimony
Loan window opens for California small businesses
Audio Advertising: How It Can Elevate Your Brand Awareness