Juul’s U.S. e-cigarette ban could pave the way for Altria, one of its largest investors, to pursue other vaping product makers or go it alone, Wall Street analysts said on Friday.

Despite regulators highlighting the risks of vaping, analysts say e-cigarettes are key to the nicotine industry’s future, with JP Morgan analysts expecting the $11-billion U.S. retail market to double in size by 2030.

Altria, like other tobacco majors, has therefore been investing in smokeless options, including snus and snuff, amid a broader crackdown on the use of cigarettes due to health risks.

Under a 2018 deal that gave Altria a 35% stake in Juul, the maker of Marlboro cigarettes in the United States cannot invest or engage in the e-vapor business other than through Juul, which has faced more scrutiny from regulators and lawmakers over the appeal of its nicotine products to teenagers.

However, analysts said Altria’s obligations are voided if the value of its stake in Juul falls by more than 90% from the time at which it bought into the once high-flying firm. 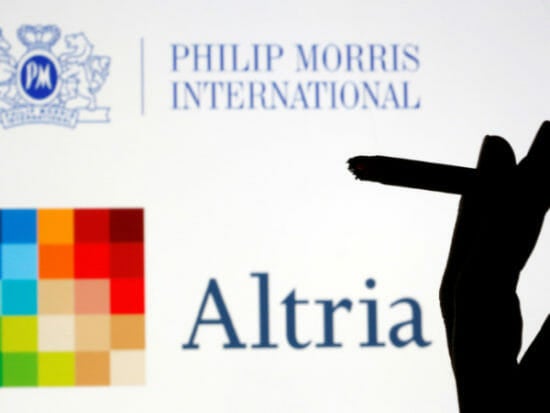 A hand with a cigarette is seen in front of displayed logos of Philip Morris and Altria in this picture illustration taken September 26, 2019. REUTERS/Dado Ruvic/Illustration

The valuation of privately owned Juul has since plummeted, with its value on Altria’s balance sheet shrinking 87% to $1.6 billion as of March 31 from $12.8 billion that it paid in 2018.

Altria’s shares have lost about 7%, or nearly $6 billion, in market value since Wednesday after reports that the U.S. Food and Drug Administration was preparing to ban Juul’s products.

The regulator on Thursday said Juul’s applications “lacked sufficient evidence” to show that the sale of the products would be appropriate for public health.

“With the elimination of the non-compete, Altria could pursue M&A in e-vapor or organic product development,” Cowen analyst Vivien Azer said.

In response to the FDA’s ban on its e-cigarette, Juul said it was looking to get a stay and also appeal the decision, which analysts have said would help it to keep its products on the market.

Bernstein analyst Callum Elliott said in a note this week that Altria could try to buy privately-owned Njoy, which has already succeeded with its PMTA (Premarket Tobacco Product Application) process applications.

Altria and Juul did not respond to requests for comment.

“(The FDA) decision points toward the need for Altria to accelerate its investments in alternative nicotine-delivery systems sooner rather than later,” Edward Jones analyst John Boylan said.