There’s no Corpus Christi without priests!

There’s no Corpus Christi without priests! 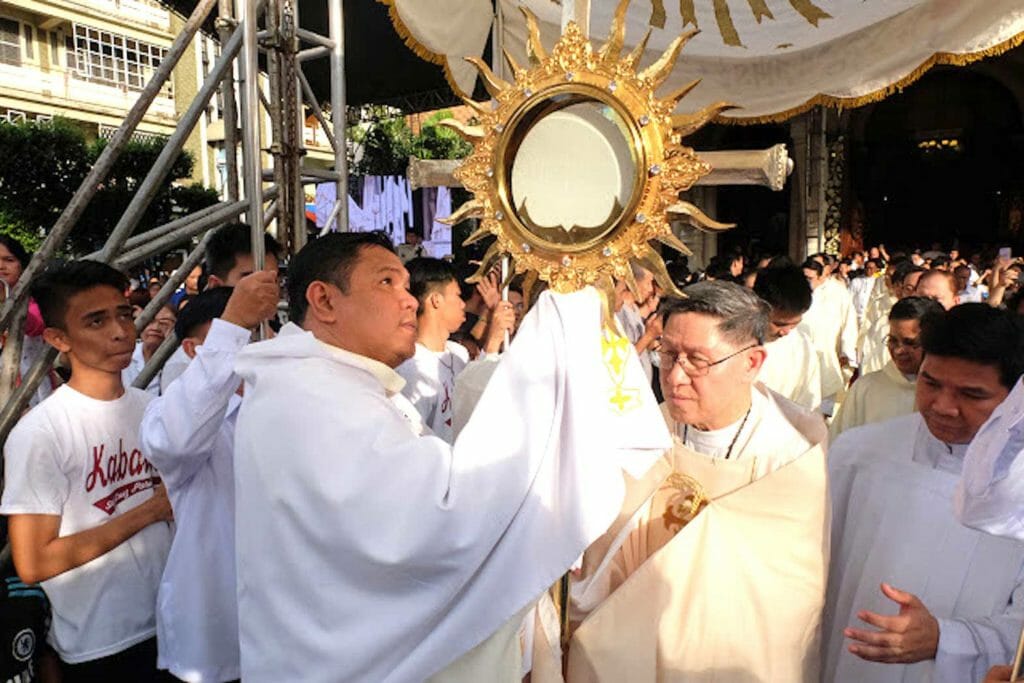 A Feast of Corpus Christi commemoration in the Philippines. CNW

A few days ago, ahead of the Solemnity of Corpus Christ, the predominantly Catholic nation of Timor-Leste celebrated the feast of the Body of Christ. It was a joy to behold Cardinal-elect Archbishop Dom Virgilio do Carmo da Silva of Dili joining priests, seminarians, nuns and thousands of the lay faithful in procession from Balide Immaculate Conception Parish to the Our Lady of Fatima Monument and Park in Lecidere.

In comparison, religious freedoms are curtailed in communist Laos, and its Christian minority is targeted for their faith because Christianity is considered an alien creed that is neither Laotian nor Asian. For this reason, no Catholic processions in honor of Corpus Christi are allowed.

In China, also a communist nation the Catholic communities in Cang Zhou diocese in the province of He Bei and other dioceses celebrate the feast of Corpus Christi with relative freedom, with thousands of participants at times transforming the event into an opportunity for evangelization. He Bei Province, with more than one million adherents, has the largest Catholic population in China.

There’s unleavened bread and grape wine, moments before the Consecration. The commentator announces: Let us all kneel. The cherubim and angels quickly descend from Heaven, kneel beside the altar, and ready themselves for a solemn worship.

When the priest presider says the consecratory prayer, Hoc est Corpus Meum, “This is My Body,” the bread becomes the living Body of Christ. Then he prays, “This is the Chalice of my Blood,” the grape wine becomes the precious Blood of our Blessed Lord.

As if to dramatize this reality, St. Augustine noted that angels can only act as altar boys who assist the priest who presides over the Eucharistic celebration. In many Asian countries where Catholics are the minority, the mystery of the Body of Christ in the Holy Eucharist is the core of the conversion of millions and the center of the priestly vocations of thousands.

Truly, really, and not just symbolically! While on their knees, the priest and the Catholic faithful praise God in awe, in submission, in latria, the Greek word for adoration and worship dedicated only for God because YHWH God – omnipotent, omniscient, and omnibenevolent – is indeed present in the form of the Bread and Wine!

Kneeling is the physical gesture of latria in the Holy Mass. “Faith sees” and the Catholic believer knows that Jesus Christ, the Son of the living God, is really present at that very moment. As Saint Gregory the Great (AD 540-604) captured the mystery in these words:

“Who doubts that in the very hour of the Sacrifice, at the words of the Priest, the Heavens be opened, and the choirs of Angels are present in that Mystery of Jesus Christ.”

Only the ordained priest can make the Real Presence possible and no one else can accomplish that. No king, no genius, not even the will of a thousand angels, or the combined efforts of a whole nation, can substitute for the power of a priest’s words: “This is My Body…This is the Chalice of My Blood.”

The Fathers of the Church did not hesitate to say there is nothing less than a miraculous change taking place on the altar than what took place in the womb of Mary at the moment of the Incarnation. Before Our Lady pronounced the word, there was no Christ on earth. The moment she did, Fiat voluntas tua, “not my will but yours be done,” Jesus took dwelling in her body, “and the Word was made flesh.”

Something similar to St. John Vianney’s “God obeys the priest,” St. Alphonsus de Liguori said in his work Dignity and Duties of the Priest, “God himself descends on the altar” in obedience to the words of the priest, Hoc est Corpus Meum. Faith sees it and the Catholic heart feels it.

In his 2004 letter, John Paul II told his priests: “If we feel moved before the Christmas crib, when we contemplate the Incarnation of the Word, what must we feel before the altar where, by the poor hands of the priest, Christ makes his Sacrifice present in time? In the here and now! We can only fall to our knees and silently adore this supreme mystery of faith.”

It’s wonderful to behold that on this day, on the Solemnity of the Corpus Christi, when the Blessed Sacrament is majestically displayed in solemn processions along crowded streets, Catholics kneel down to worship. They worship God present in the form of the Sacred Bread, the Body of Christ!

Jose Mario Bautista Maximiano is the author of Pope Francis, the Catholic Bishop, and the Priest (Claretians, 2014) and Why Remain a Catholic? (St. Paul’s, 1994).