Sen. Trillanes in LA explains his opposition to Duterte

Sen. Trillanes in LA explains his opposition to Duterte 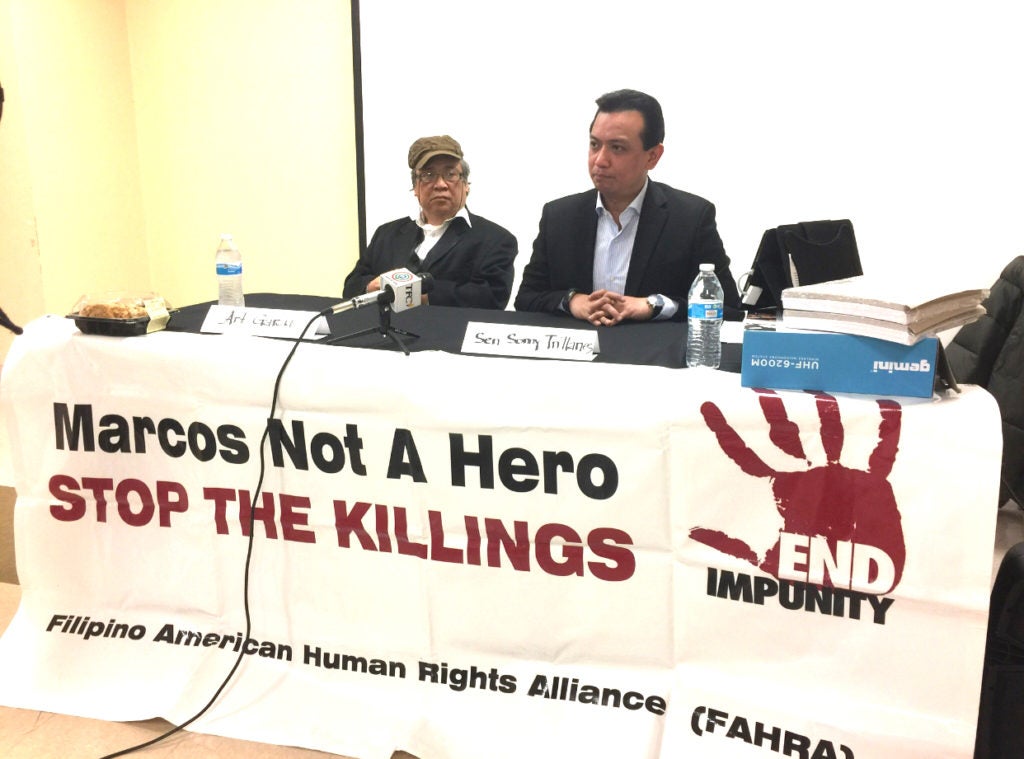 LOS ANGELES – Senator Antonio Trillanes IV spoke to members of the Filipino community, including some supporters of President Duterte, in a forum on Feb. 10 at the Pilipino Workers Center (PWC) here.

Senator Trillanes explained why he keeps criticizing the Duterte administration. “We are in a democracy. My role is to check abuses and anomalies of the executive branch,” he said.

Trillanes attacked the Duterte tax plan as “backbreaker” for Filipinos. Under the tax plan, the government increases the excise tax on gasoline to 10 pesos per liter, among other increases.

“We tried to scale down the taxes to prevent the poverty, so that’s why I’m doing my job as the voice of opposition,” Trillanes explained.

“EJKs are the means to strike fear in the hearts of Filipino people to not speak out or criticize the administration,” the former Philippine Military Academy graduate and naval officer said.

Recently, the International Criminal Court (ICC) began to investigate Duterte due to complaints alleging EJKs. The President himself, says he welcomes the preliminary examination of crimes against humanity.

“Preliminary examination is a major breakthrough because it means the ICC found valid merit to cases being filed in the court,” the senator said.

“There must be a due process. Killing is not the best punishment for the criminals. Instead, we must penalize them in the right manner,” the senator explained.

Dengue vaccine Dengvaxia has become a controversy with over 800,000 immunized

students reportedly at risk of serious ailments. The Philippine Department of Justice and the National Bureau of Investigation are probing the vaccination program.

Trillanes stated that his children were also vaccinated through Dengvaxia. “If you notice, I am not participating on the Senate hearing [on Dengvaxia] because of my children, but I am asserting the facts and interested if Dengvaxia is safe or dangerous,” the senator said.

One of Duterte’s promises during his presidential campaign was to end the contractualization of labor, in order to create stable jobs and employment security for workers.

The president seemed to hedge on this promise lately. Although according to PH Labor Secretary Silvestre Bello III said that by March this year, the president will sign an executive order banning forms of contractualization. Members of the Filipino community in Los Angeles attended the forum. CONTRIBUTED

A few months after the 2016 presidential election, Trillanes sponsored the Senate Bill No. 1184 (Security of Tenure Bill) for all qualified casual and contractual government employees to become permanent workers.

The senator stated that public sector, or the government, has more contractualized workers than any other sector.

“The Security of Tenure Bill will be given more benefits to regular employees who meet the certain requirements depending on years of employment service,” he said.

“Shutting down the Rappler is a sign of a creeping dictatorship. This latest move to suspend [Rappler] is a strong-arm tactic of the current administration,” Trillanes said.

Trillanes encouraged Filipinos to be wake up and defend the press freedom. “To make democracy flourish,” there must be truth, not propaganda,” he added.

The National Union of Journalists in the Philippines condemned the shutdown and expressed outrage over the SEC ruling Amnesty International considers the SEC order as a politically motivated decision.

Known as Panatag Shoal, Scarborough Shoal is a disputed territory being claimed by China, Taiwan and the Philippines.

In 2016, Trillanes was accused of treason by then presumptive President-elect Duterte because of his “back-channel” talks in Beijing with Chinese officials over West Philippine Sea. Duterte stated that the Senator went to China in secret 16 times, leading to the loss of the shoal.

Trillanes was the Philippines’ backchannel negotiator in the territorial rift during the Aquino presidency.

Ombudsman Conchita Carpio Morales, however, cleared President Benigno Aquino III and Trillanes of a treason complaint, ruling that it had no legal basis.

“President Aquino decide to open the backchannel because that was one of the legal options to address the crisis,” the two-term senator said.