Thinking  of gun violence and mass killings on Memorial Day

Thinking  of gun violence and mass killings on Memorial Day 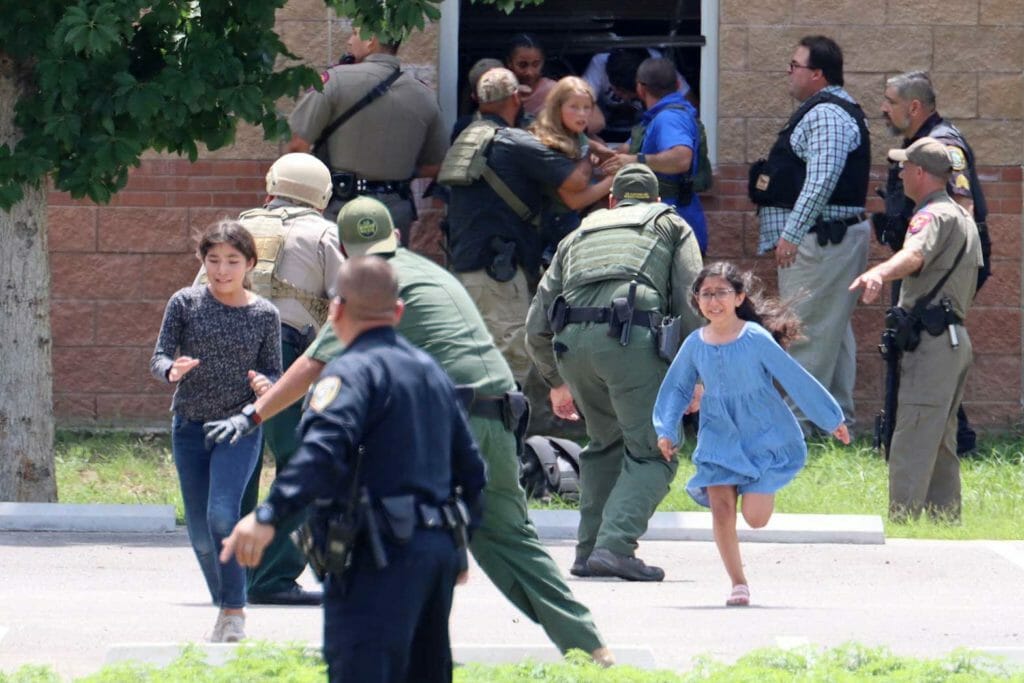 Children run to safety after escaping from a window during a mass shooting at Robb Elementary School where a gunman killed nineteen children and two adults in Uvalde, Texas, U.S. May 24, 2022. Picture taken May 24, 2022. Pete Luna/Uvalde Leader/REUTERS

Before he leaves in June, Philippine President Rodrigo Duterte is on record saying he’d like to “take out 3 to 5 more drug lords.”

This is the outgoing president of a “democracy” speaking. Will he carry out his plans? The blood is never on him. Duterte has people who answer to him who have committed the thousands of extrajudicial killings that have occurred in the Philippines during Duterte’s reign of terror.

When you consider gun violence in the PH, is there really much difference between what happens there and the kind of mass killings that are plaguing America?

Can you compare the victims in Buffalo or Uvalde to drug traffickers? Well, in the RP, they are mostly suspected drug traffickers, without benefit of a trial. Other victims there, are simply people caught in the crossfire.

It’s still boils down to innocent people getting shot and killed. And the official numbers in the Philippines, still undercounted at less than 10,000, are daunting.

The first mass killing I ever covered in my journalism career was in 1980. It was in East Texas, about 90 minutes by helicopter from Dallas. I saw a lot of Texas underneath me that day as I landed in a place called Daingerfield.

There, a shooter named Alvin Lee King III, dressed in camouflage garb, burst into the town’s First Baptist church, killing five people, wounding 10. King was armed with an AR-15, the assault weapon of choice to this day.

But I’ll never forget his entrance line. Or was it his exit? King proclaimed, “This is war.”

It is a war being waged on America by individuals armed with military-style weapons hell-bent on killing innocent, peaceful, unsuspecting Americans.

And now dozens of them are children. This is the gun epidemic in America, where the country has become a “danger field.”

Should we even lift a finger? My sarcasm is prompted by the seriousness of the majority of Republicans. They’re addicted to NRA money and insist the problem will go away.

But that’s not true. The cases will age, like Daingerfield, only to be replaced with new mass shootings, new perps, new victims, new deaths. It’s the same problem in perpetuity.

And the gun of choice remains the semi-automatic AR-15 assault rifle whose only purpose is to serve the evil wishes of its consumers—to destroy human life.

The cycle will go on until our political leaders summon the courage to break it. But that’s how shamelessly we deal with mass shootings in America.

The rightwing politicizes and protects the unborn, while protecting their bread and butter, the gun.

Almost a week after the Uvalde massacre, I keep thinking of 11-year-old Miah Cerrillo, a student who was in the thick of things at Robb Elementary. She’s the one who knows how mistakes were made at the Uvalde school shootout.

Nineteen cops were in the hallway, thinking the situation involved a barricaded suspect, not an active shooter. Instead of going after the gunman, the cops waited for reinforcements. For more than an hour.

Nineteen young kids and two of their teachers were no longer among the living.

Meanwhile, there were still some people alive. Miah is believed to have called 911 on a cell phone to send help. None came in time.

It is the tragedy of America.

Cerrillo, 11, told CNN she saw one of her teachers get shot in the face by the gunman, 18-year-old Salvador Ramos.

Cerrillo described how bullets flew over her but how she was hit in the shoulders and head by gunfire fragments.

As the gunman moved to an adjoining part of the classroom, Cerrillo said she managed to get her dead  teacher’s phone and call 911 for help.

But then fearing the gunman would return, Cerrillo stayed on the floor among her fallen classmates. She dipped her hands into the blood of a friend, already dead. Then she smeared the blood on herself in order to protect herself by playing dead.

It is a detail of Uvalde that will haunt me for the rest of my life, just like Alvin Lee King’s proclamation, “This is war.”This is no way to be a child in America.

As the Uvalde mourning continues, think of the trauma of survivors like Cerrillo and wonder what they must endure because NRA-addicted Republicans remain motionless, covered in blood and playing dead.

Emil Guillermo is a journalist and commentator. He writes a weekly column for the Inquirer’s North American bureau.