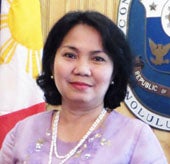 Jamoralin earned her Ph.D. in Economics from the University of Santo Tomas and a Master of Public Administration from the University of the Philippines. She also earned her MBA from McGill University in Tokyo. She completed a Post-Graduate Diploma in International Relations from the Institute of Social Studies (ISS) at The Hague, The Netherlands and the Diplomatic Course for Junior ASEAN Diplomats at the Institute of Diplomacy and Foreign Relations in Kuala Lumpur, Malaysia.

Jamoralin initiated the proposal for “The Sakada Day Bill,” which was unanimously passed into state law on April 9, 2016 to acknowledge the first 15 Filipino plantation farmers in Hawaii.

The consul also initiated a program to encourage future generations of Filipinos to learn to speak Filipino. The Ilocano Language Acquisition and Immersion for the Next Generation (iLAING) project graduated 20 students in 2014. This prepared five students for a ten-day immersion trip to the Philippines in July 2015.